The College of Engineering is a division of Cornell University that was founded in 1870 as the Sibley College of Mechanical Engineering and Mechanic Arts. It is one of four private undergraduate colleges at Cornell that are not statutory colleges.

It currently grants bachelors, masters, and doctoral degrees in a variety of applied fields, and is the third largest undergraduate college at Cornell by student enrollment. The college offers over 450 engineering courses, and has an annual research budget exceeding US$112 million.[1] Bill Gates donated $25 million in 2006 for the construction of a new building for Computer Science. 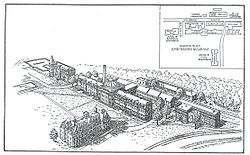 The original layout of the College of Engineering

The College of Engineering was founded in 1870 as the Sibley College of Mechanical Engineering and Mechanic Arts. The program was housed in Sibley Hall on what has since become the Arts Quad, both of which are named for Hiram Sibley, the original benefactor whose contributions were used to establish the program. The college took its current name in 1919, when the Sibley College merged with the College of Civil Engineering. It was housed in Sibley, Lincoln, Franklin, Rand and Morse Halls. In the 1940s the college moved to the southern end of Cornell's campus.

For many years, the college offered a five-year undergraduate degree program. However, in the 1960s, the course was shortened to four years for a B.S. degree with an optional fifth year leading to a masters of engineering degree. From the 1950s to the 1970s, Cornell offered a Master of Nuclear Engineering program, with graduates gaining employment in the nuclear industry. However, after the 1979 accident at Three Mile Island, employment opportunities in that field dimmed and the program was dropped. Cornell continued to operate its on-campus nuclear reactor as a research facility following the close of the program. For most of Cornell's history, Geology was taught in the College of Arts and Sciences. However, in the 1970s, the department was shifted to the engineering college and Snee Hall was built to house the program. After World War II, the Graduate School of Aerospace Engineering was founded as a separate academic unit, but later merged into the engineering college.

Cornell's College of Engineering has been ranked as being one of the top seven engineering programs in the nation by U.S. News and World Report.[5] The engineering physics program at Cornell was ranked as being No. 1 by U.S. News and World Report in 2008. Cornell's operations research and industrial engineering program ranked fourth in nation, along with the master's program in financial engineering.[6] Cornell's computer science program ranks among the top five in the world, and it ranks fourth in the quality of the graduate education.[7] 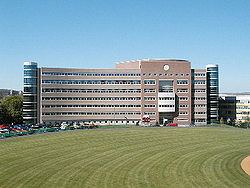 With about 3,000 undergraduates and 1,300 graduate students, the college is the third-largest undergraduate college at Cornell by student enrollment.[1] It is divided into twelve departments and schools:Cite error: Closing </ref> missing for <ref> tag; see the help page Also, modern and open collaborative working spaces were introduced with the construction of a large atrium connecting Duffield, which houses research and teaching facilities for nanoscale science and engineering, with Phillips and Upson (1956)[9] Halls. Connected to Upson Hall, away from the quad, are Grumman Hall (1957)[10] and Frank H.T. Rhodes Hall (1990),[11] which currently houses the Cornell Theory Center. On the southern end of the Quad, next to Upson and near Cascadilla Creek, are Kimball, Thurston[12] and Bard (1963)[13] Halls, all part of a single brick and concrete structure. Thurston is the home to the Theoretical and Applied Mechanics department, and Bard Hall the home of the Material Sciences department. Between Upson and Kimball stands Ward Hall (1963),[12] the soon to be closed down and former building for nuclear sciences. Next to Bard, and across the street from the Cornell Law School, stand Snee Hall (1984)[14] and Hollister Hall (1957).[15] Carpenter Hall (1956),[16] containing the Engineering Library, stands next to Hollister on the northwestern corner. It is one of the smallest buildings on campus and the site of a protracted anti-war building occupation in 1972. The edge of northern face of the quad, mostly open space, is lined with trees along Campus Road. Across Campus Road is F.W. Olin Hall (1941),[17] the home of the Chemical Engineering department.

The College of Engineering has developed a facilities master plan that calls for replacements and renovations of buildings on the Engineering Quad as well as addressing programs housed elsewhere on the campus. Weill Hall, which opened in 2008, houses the Department of Biomedical Engineering. A new physical sciences building, currently constructed between Rockefeller and Baker Labs was completed in late 2010 and houses the School of Applied and Engineering Physics.

Gates Hall, funded in part by a $25 million gift from the Bill and Melinda Gates Foundation, is in the planning stages. The building will be located across Campus Road from Barton Hall on the current site of the Grumman Squash Courts parking lot. It will house the Department of Computer Science and the Faculty of Computing and Information Sciences. Construction of the building is predicted to begin in March 2012.[18]

Design has also been initiated for a new building that will replace Carpenter Hall and the north portion of Hollister Hall, providing new space for the Sibley School of Mechanical and Aerospace Engineering and for the School of Civil and Environmental Engineering.[19] 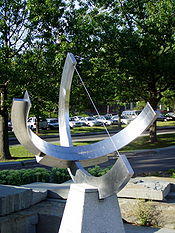