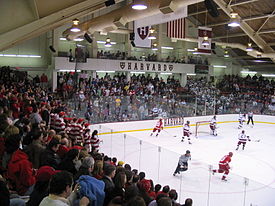 The Cornell-Harvard Hockey Game is a men's ice hockey sports rivalry between the Big Red of Cornell University and the Crimson of Harvard University dating back to 1910.[1]

Not including playoff meetings, the teams play twice each season, once at Cornell's Lynah Rink in Ithaca, New York and once at Harvard's Bright Hockey Center in Allston, Massachusetts (just across the Charles River from Harvard's Cambridge, MA campus). Since the first time they played, the overall series record is 71-59-7 in favor of Cornell as of November 12, 2011.[2]

The rivalry is so important to Cornell in particular that head coach Mike Schafer listed defeating the Crimson (who were then unbeaten in their last 20 regular-season games against the Big Red) as one of his three goals for his first season in 1995-1996. Schafer's record against Harvard as a coach is 31-13-2 as of November 12, 2011.[2]

On January 6, 1973, a Harvard fan threw a dead chicken at Cornell goalie Dave Elenbaas.[1] The chicken was a crack at Cornell's College of Agriculture and Life Sciences. Later that month, Cornell fans threw dead fish on the ice, purportedly as a reference to Boston's seafood industry.[1] Harvard fans retaliated during the same game by tying a live chicken to Cornell's goal post. Despite countermeasures by university officials, Cornell fans still continue to throw fish prior to, or occasionally during, the Harvard game at Lynah.[3]

In an interview with the Cornell Daily Sun, published on November 8, 2006, William Ruskin of Cornell's class of ’74 disputed this version of history. He said that after hearing about Harvard's original 1973 chicken prank, he and his friends decided to get some revenge, and started planning. "'Contrary to what was in The New York Times this week, there was no intention at the time to have any symbolism of the New England fishing industry,' Ruskin said. 'We merely wanted to put something disgusting in their net … [and] getting a big smelly fish seemed like the best thing we could do.'"[4]

The tradition continued in February 1977, when between the second and third periods in a game at Lynah Rink, a chicken was tied to the Harvard goal post.

Due to relatively large numbers of Cornell fans traveling to away games, the significance of the rivalry on the Cornell side, and generally low attendance at Harvard hockey games, contests at Bright have sometimes been played in front of predominantly pro-Cornell crowds. This led to the idea of Cornell-at-Harvard games as de facto home games for Cornell, and earned Bright (and by extension the Cornell-Harvard game played there) the nickname of "Lynah East." With the increasing success of Harvard's hockey program since 2002, the size and participation of the Harvard contingent has increased and the crowd has become more balanced.

A Cornell-Harvard hockey game plays an important role in the first half of the novel and film Love Story, whose protagonist, Oliver Barrett, is a Harvard undergraduate and member of the Crimson hockey team, and whose author, Erich Segal, is a Harvard alumnus. In the movie, Harvard's hockey team loses to Cornell's. Although exterior post-game shots were filmed on the Cornell campus, they showed characters exiting Barton Hall, the old armory where Cornell played basketball at the time, rather than Lynah Rink.

In commemoration of Cornell's victory in that fictional game, the Cornell Big Red Pep Band plays the theme from Love Story when Harvard takes the ice before the first two periods of each game.