The balance wheel is the timekeeping device used in mechanical watches and some clocks, analogous to the pendulum in a pendulum clock. It is a weighted wheel that rotates back and forth, being returned toward its center position by a spiral spring, the balance spring or hairspring. It is driven by the escapement, which transforms the rotating motion of the watch gear train into impulses delivered to the balance wheel. Each swing of the wheel (called a 'tick' or 'beat') allows the gear train to advance a set amount, moving the hands forward. The combination of the mass of the balance wheel and the elasticity of the spring keep the time between each oscillation or ‘tick’ very constant, accounting for its near universal use as the timekeeper in mechanical watches to the present. From its invention in the 14th century until quartz movements became available in the 1970s, virtually every portable timekeeping device used some form of balance wheel.

Until the 1980s balance wheels were used in chronometers, bank vault time locks, time fuzes for munitions, alarm clocks, kitchen timers and stopwatches, but quartz technology has taken over these applications, and the main remaining use is in quality mechanical watches.

Modern (2007) watch balance wheels are usually made of Glucydur, a low thermal expansion alloy of beryllium, copper and iron, with springs of a low thermal coefficient of elasticity alloy such as Nivarox.[1] The two alloys are matched so their residual temperature responses cancel out, resulting in even lower temperature error. The wheels are smooth, to reduce air friction, and the pivots are supported on precision jewel bearings. Older balance wheels used weight screws around the rim to adjust the poise (balance), but modern wheels are computer-poised at the factory, using a laser to burn a precise pit in the rim to make them balanced.[2] Balance wheels rotate about 1½ turns with each swing, that is, about 270° to each side of their center equilibrium position. The rate of the balance wheel is adjusted with the regulator, a lever with a narrow slit on the end through which the balance spring passes. This holds the part of the spring behind the slit stationary. Moving the lever slides the slit up and down the balance spring, changing its effective length, and thus the resonant vibration rate of the balance. Since the regulator interferes with the spring's action, chronometers and some precision watches have ‘free sprung’ balances with no regulator, such as the Gyromax.[1] Their rate is adjusted by weight screws on the balance rim.

A balance's vibration rate is traditionally measured in beats (ticks) per hour, or BPH, although beats per second and Hz are also used. The length of a beat is one swing of the balance wheel, between reversals of direction, so there are two beats in a complete cycle. Balances in precision watches are designed with faster beats, because they are less affected by motions of the wrist.[3] Watches made prior to the 1970s usually had a rate of 5 beats per second (18,000 BPH). Current watches have rates of 6 (21,600 BPH), 8 (28,800 BPH) and a few have 10 beats per second (36,000 BPH). During WWII, Elgin produced a very precise stopwatch that ran at 40 beats per second (144,000 BPH), earning it the nickname 'Jitterbug'.[4] Audemars Piguet currently produces a movement that allows for a very high balance vibration of 12 beats/s (43,200 BPH).[5]

The precision of the best balance wheel watches on the wrist is around a few seconds per day. The most accurate balance wheel timepieces made were marine chronometers, which by WWII had achieved accuracies of 0.1 second per day.[6]

A balance wheel's period of oscillation T in seconds, the time required for one complete cycle (two beats), is determined by the wheel's moment of inertia I in kilogram-meter2 and the stiffness (spring constant) of its balance spring κ in newton-meters per radian: 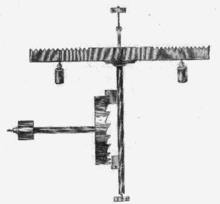 Perhaps the earliest existing drawing of a balance wheel, in Giovanni De Dondi's astronomical clock, built 1364, Padua, Italy. The balance wheel (crown shape, top) had a beat of 2 seconds. Tracing of an illustration from his 1364 clock treatise, Il Tractatus Astrarii.

The balance wheel appeared with the first mechanical clocks, in 14th century Europe, but it seems unknown exactly when or where it was first used. It is an improved version of the foliot, an early inertial timekeeper consisting of a straight bar pivoted in the center with weights on the ends, which oscillates back and forth. The foliot weights could be slid in or out on the bar, to adjust the rate of the clock. The first clocks in northern Europe used foliots, while those in southern Europe used balance wheels.[7] As clocks were made smaller, first as bracket clocks and lantern clocks and then as the first large watches after 1500, balance wheels began to be used in place of foliots.[8] Since more of its weight is located on the rim away from the axis, a balance wheel could have a larger moment of inertia than a foliot of the same size, and keep better time. The wheel shape also had less air resistance, and its geometry partly compensated for thermal expansion error due to temperature changes.[9] 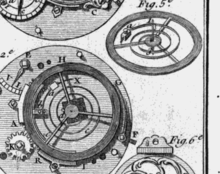 These early balance wheels were crude timekeepers because they lacked the other essential element: the balance spring. Early balance wheels rotated freely in each direction until the escapement pushed it back the other way. This made the timekeeping strongly dependent on the driving force, so the watch slowed down as the mainspring unwound.

A way forward opened when it was noticed that springy hog bristle curbs, added to limit the rotation of the wheel, increased its accuracy.[10][11] Robert Hooke first applied a metal spring to the balance in 1658 and Jean de Hautefeuille and Christian Huygens improved it to its present spiral form in 1674[9][12] The addition of the spring made the balance wheel a harmonic oscillator, the basis of every modern clock, with a natural resonant frequency or ‘beat’ resistant to changes in the drive force or friction. This crucial innovation greatly increased the accuracy of watches, from several hours per day[13] to perhaps 10 minutes per day,[14] changing them from expensive novelties into useful timekeepers.

After the spring was added, a major remaining source of inaccuracy was the effect of temperature changes. An increase in temperature made the spring and the balance get slightly longer from thermal expansion, but a more important effect was that the elasticity of the spring's metal decreased. The weaker spring would take longer to return the balance wheel back toward the center, so the ‘beat’ would get slower and the watch would lose time. Ferdinand Berthoud found in 1773 that an ordinary brass balance and steel hairspring, subjected to a 60°F (33°C) temperature increase, loses 393 seconds (6 1/2 minutes) per day, of which 312 seconds is due to spring elasticity decrease.[15]

The need for an accurate clock for celestial navigation during sea voyages drove many advances in balance technology in 18th century Britain and France. Even a 1 second per day error in a marine chronometer could result in a 17-mile error in ship's position after a 2 month voyage. John Harrison was first to apply temperature compensation to a balance wheel in 1753, using a bimetallic ‘compensation curb’ on the spring, in the first successful marine chronometers, H4 and H5. These achieved an accuracy of a fraction of a second per day,[14] but the compensation curb was not further used because of its complexity. 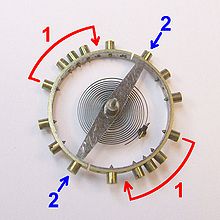 A simpler solution was devised around 1765 by Pierre Le Roy, and improved by John Arnold, and Thomas Earnshaw: the Earnshaw or compensating balance wheel.[16] The key was to make the balance wheel change size with temperature. If the balance could be made to shrink in diameter as it got warmer, the smaller moment of inertia would make it rotate faster, like a spinning ice skater that pulls in her arms. The faster balance would take less time to oscillate back and forth, compensating for the slowing caused by the weaker spring.

To accomplish this, the outer rim of the balance was made of a ‘sandwich’ of two metals; a layer of steel on the inside fused to a layer of brass on the outside. Strips of this bimetallic construction bend toward the steel side when they are warmed, because the thermal expansion of brass is greater than steel. The rim was cut open at two points next to the spokes of the wheel, so it resembled an S-shape (see figure) with two circular bimetallic ‘arms’. Indeed, these wheels are sometimes referred to as "Z - balances". A temperature increase makes the arms bend inward toward the center of the wheel, and the shift of mass inward makes the balance spin faster, cancelling out the slowing due to the spring. The amount of compensation is adjusted by moveable weights on the arms. Marine chronometers with this type of balance had errors of only 3 – 4 seconds per day over a wide temperature range.[17] By the 1870s compensated balances began to be used in watches.

The standard Earnshaw compensation balance dramatically reduced error due to temperature variations, but it didn't eliminate it. As first described by J. G. Ulrich, a compensated balance adjusted to keep correct time at a given low and high temperature will be a few seconds per day fast at intermediate temperatures.[18] The reason is that the moment of inertia of the balance varies as the square of the radius of the compensation arms, and thus of the temperature. But the elasticity of the spring varies linearly with temperature. 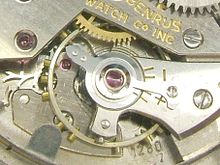 Low temperature coefficient alloy balance and spring, in an ETA 1280 movement from a Benrus Co. watch made in the 1950s.

The bimetallic compensated balance wheel was made obsolete in the early 20th century by advances in metallurgy. Charles Edouard Guillaume won a Nobel prize for the 1896 invention of Invar, a nickel steel alloy with very low thermal expansion, and Elinvar (from El asticité invar iable) an alloy whose elasticity is unchanged over a wide temperature range, for balance springs.[20] A solid Invar balance with a spring of Elinvar was largely unaffected by temperature, so it replaced the difficult-to-adjust bimetallic balance. This led to a series of improved low temperature coefficient alloys for balances and springs.

Guillaume himself invented an alloy to compensate for middle temperature error by endowing it with a negative quadratic temperature coefficient. This alloy is a slight variation of invar. The quadratic coefficient is defined by its place in the equation of expansion of a material;[21]

is the length of the sample at some reference temperature

is the temperature above the reference

is the length of the sample at temperature

is the linear coefficient of expansion

is the quadratic coefficient of expansion