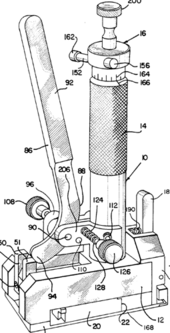 Diagram of a dermatome

A dermatome is a surgical instrument used to produce thin slices of skin from a donor area, in order to use them for making skin grafts. One of its main applications is for reconstituting skin areas damaged by grade 3 burns or trauma.

Dermatomes can be operated either manually or electrically. The first drum dermatomes, developed in the 1930s, were manually operated. Afterwards, dermatomes which were operated by air pressure, such as the Brown dermatome, achieved higher speed and precision. Electrical dermatomes are better for cutting out thinner and longer strips of skin with a more homogeneous thickness.

Those are manual dermatomes and the term knife or scalpel is used to describe them. Their disadvantages are harvesting of grafts with irregular edges and grafts of variable thickness. Their operator has to be experienced in their use for optimal results.[1]

There are several types of dermatomes, usually named after their inventor.