Godzilla vs. Megalon (ゴジラ対メガロ, Gojira tai Megaro?) is a 1973 Japanese science fiction kaiju film directed and co-written by Jun Fukuda with special effects by Teruyoshi Nakano. It was the thirteenth film in the Godzilla franchise. It is the second film to feature Gigan and the first and only film to feature Megalon and Jet Jaguar.

In 1991, the film was shown on the television show Mystery Science Theater 3000.

For years, Seatopia, the undersea civilization, has been heavily affected by nuclear testing conducted by the surface nations of the world. Upset by this, they plan to unleash their civilization's god, Megalon, to the surface to destroy the world out of vengeance.

On the surface, an inventor named Goro Ibuki, his kid brother Rokuro and their friend Hiroshi Jinkawa are off on an outing near a lake when Seatopia makes itself known to the Earth by drying up the lake the trio was relaxing nearby and using it as a base of operation (unknown to our heroes.) As they return home they are ambushed by agents of Seatopia who are trying to steal Jet Jaguar, a humanoid robot under construction by the trio of inventors. However the Agents's first attempt is botched and they are forced to flee to safety.

Some time later, Jet Jaguar is completed but the trio of inventors are knocked unconscious by the returning seatopian agents. The agents's plan is to use Jet Jaguar to guide and direct Megalon to destroy whatever city Seatopia commands. Goro and Rokuro are sent to be killed, while Hiroshi is taken hostage. Megalon is finally released to the surface while Jet Jaguar is put under the control of the Seatopians and is used to guide Megalon to attack Tokyo with the Japan Self Defense Forces failing to defeat the monster. Eventually, the trio of heroes manage to escape their situation with the Seatopians and reunite to devise a plan to send Jet Jaguar to get Godzilla's help using Jet Jaguar's secondary control system.

After uniting with Japan's Defense Force, Goro manages to regain control of Jet Jaguar and sends the robot to Monster Island to bring Godzilla to fight Megalon. Without a guide to control its actions, Megalon flails around relentlessly and aimlessly fighting with the Defense Force and destroying the outskirts of Tokyo. The Seatopians learn of Jet Jaguar's turn and thus send out a distress call to the Nebula M aliens (from the previous film) to send Gigan to assist them.

As Godzilla journeys to fight Megalon, Jet Jaguar programs into a safeguard mode and grows to gigantic proportions to face Megalon himself until Godzilla arrives. The battle is roughly at a standstill between robot and monster, until Gigan arrives and both Megalon and Gigan double team Jet Jaguar. Godzilla finally arrives to assist Jet Jaguar and the odds become evened. After a long and brutal fight, Gigan and Megalon both retreat and Godzilla and Jet Jaguar shake hands on a job well done. Godzilla returns to Monster Island, and Jet Jaguar returns to his previous, human-sized state and reunites with his inventors.

Godzilla Vs. Megalon was originally planned as a non-Godzilla film, a solo vehicle for Jet Jaguar, which was the result of a contest Toho had for children in mid-to-late 1972. The winner of the contest was an elementary school student, who submitted the drawing of a robot called Red Arone, which superficially resembled both Ultraman and Mazinger Z. The robot was renamed Jet Jaguar and was set to star in Jet Jaguar vs. Megalon, which pitted him against Megalon. However, after doing some screen tests and storyboards, Toho figured Jet Jaguar would not be able to carry the film on his own, either in screen appearance or marketing value, so they shut the project down during pre-production. Nearly a month later, producer Tomoyuki Tanaka called in screenwriter Shinichi Sekizawa to revise the script to add Godzilla and Gigan. To make up for lost production time, the film was shot in a hasty three weeks. The production time totaled at nearly six months, from planning to finish.[1]

According to Teruyoshi Nakano, the Godzilla suit made for this film (known as the Megaro-Goji) was made in a week, the fastest featured Godzilla suit ever made to date. Godzilla was portrayed by stunt actor Shinji Takagi.

There are, interestingly, no major female characters in the movie, making this the only Godzilla film without a female lead.

Toho's popular kaiju character Anguirus appears in some stock footage from Destroy All Monsters and in two newly-filmed scenes on Monster Island. In the second new scene, Anguirus appears largely as he did in the previous film, Godzilla vs. Gigan. The first brief scene of Anguirus shows the monster without his fangs. This modification would carry over into his last appearance the next year in Godzilla vs. Mechagodzilla. 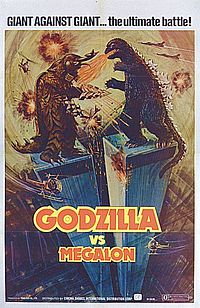 The U.S. Godzilla vs. Megalon poster, which incorrectly places the monsters in a World Trade Center-based battle.

In 1976, Cinema Shares released Godzilla vs. Megalon theatrically. Riding the coattails of Dino De Laurentiis' big-budget King Kong remake, poster art showed Godzilla and Megalon battling on top of the World Trade Center, despite the fact that no scenes were set in New York City. As it would with its later Godzilla releases, Cinema Shares opted to use the English dub created by Toho.

Cinema Shares originally released the film with very few edits. Eventually, more cuts were made, supposedly to keep a "G"-rating from the MPAA. Edits include:

With this being the first of the three Cinema Shares Godzilla releases, the publicity factor was high. Along with the poster, buttons with one of the four monsters' faces on them were released. Given away at theatrical showings was a comic herald that told a simplified version of the film. There were several errors like monster's names and locations and events. The theatrical trailer for the film also contain these errors, most notably Jet Jaguar being called "Robotman."

The press kit also included Godzilla, Megalon, Gigan, and Jet Jaguar in cars. This is a reflection of the Aurora kits with Godzilla riding a race car. Along with the press kit was a "Vote Godzilla for President" ad that, if mailed in, resulted in the receipt of a free ticket to the film.

Godzilla vs. Megalon was given a high-profile prime-time NBC network premiere in 1977, with an introduction and bumper segments by John Belushi in a Godzilla suit also used on Saturday Night Live.[2] NBC extensively cut the film so that it would fit in a one-hour time slot.

In Japan, Godzilla vs. Megalon sold approximately 980,000 tickets. It was the first Godzilla film to sell less than one million admissions.[3]

The film was a huge success in American theaters, earning $383,744 in its first three days in Texas and Louisiana alone.[4]

Godzilla vs. Megalon was released theatrically in America on May 9, 1976, though the San Francisco Chronicle indicates that it opened there in June, and The New York Times indicates that it opened in New York City on July 11. New York Times film critic Vincent Canby, who a decade before had given a negative review to Ghidorah, the Three-Headed Monster, gave Godzilla vs. Megalon a generally positive review. In his review on July 12, 1976, Canby said, "Godzilla vs. Megalon completes the canonization of Godzilla...It's been a remarkable transformation of character - the dragon has become St. George...It's wildly preposterous, imaginative and funny (often intentionally). It demonstrates the rewards of friendship, between humans as well as monsters, and it is gentle."

Godzilla vs. Megalon has attracted the ire of many Godzilla fans in the decades since its original release. The film contributed to the reputation of Godzilla films in the United States as cheap children's entertainment that should not be taken seriously.[5][6] It's been described as "incredibly, undeniably, mind-numbingly bad"[7] and one of the "poorer moments" in the history of kaiju films.[6]

In particular, the special effects of the film have been heavily criticized. One review described the Godzilla costume as appearing to be "crossed with Kermit the Frog"[6] and another sneeringly compared it to Godzilla vs. Gigan, stating that it did "everything wrong that Gigan did, and then some." However, most of the criticism is of the lack of actual special effects work, as most of it consists of stock footage from previous films, including Godzilla vs. Gigan and Ghidorah, the Three-Headed Monster, and a few pieces of effects work has garnered praise, specifically a scene where Megalon breaks through a dam and the draining of the lake.[5]

The other aspects of the film have been similarly skewered. The acting is usually described as flat and generally poor, and as not improving, or sometimes, worsening, the already weak script.[5] One part of the film, on the other hand, has garnered almost universal praise: Godzilla's final attack on Megalon, a flying kick. It has been called the saving grace of the film,[7] and was made famous by the mock exclamations of shock and awe displayed on Godzilla vs. Megalon's appearance on Mystery Science Theater 3000 Through the end of season three to the middle of season five, that clip would be shown at the opening of each show.

Despite all this, the film is also one of the most widely seen Godzilla films in the United States — it was popular in its initial theatrical release, largely due to an aggressive marketing campaign, including elaborate posters of the two title monsters battling atop New York City's World Trade Center towers, presumably to capitalize on the hype surrounding the Dino De Laurentiis remake of King Kong, which used a similar image for its own poster.[5]