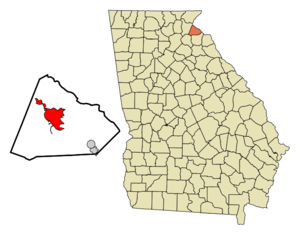 , a training base, was located nearby. It was the first training base for the 506th Parachute Infantry Regiment of the Army's 101st Airborne Division, whose Easy Company was subject of the non-fiction book and subsequent HBO miniseries "".

Toccoa is also home to the Travelers Rest Inn.

The is located here. On , the , located above the college, failed. The resulting flood killed 39 [ [http://ga.water.usgs.gov/news/historical-toccoa/ USGS-Georgia: Toccoa Dam Break ] ] .

On , , Mary Ann Stephens of Toccoa was shot to death outside a in while on vacation with her husband. The incident received national attention and resulted in an Academy Award-winning French documentary, "", on the arrest and acquittal of the original suspect. [ [http://ourgeorgiahistory.com/year/2000 Georgia History Timeline / Chronology 2000 ] ]

Toccoa is the birthplace of singer , rapper Leon Paul Woody III, philanthropist , former Clemson and NBA basketball player Dale Davis, former Georgia Tech and NFL football player , actor , and All-American (Georgia Tech) football player Ken Swilling. James Brown, the king of soul, lived in Toccoa a short time before his big break as a singer, and worked as a janitor at Toccoa High School. was an gospel musician and songwriter, and a sideman to James Brown. Paul Anderson, Olympic gold medalist in known as "the world's strongest man," was born in Toccoa. His world record for the heaviest weight ever lifted by a human (6,270 in the back lift) still stands. A 16-ton granite marker is located at his birthplace.

's Crescent train connects Toccoa with the cities of New York, Philadelphia, Baltimore, Washington, Charlotte, Atlanta, Birmingham, and New Orleans. The Amtrak station is situated at 47 North Alexander St. Toccoa is also home to the . The nearest interstate highway is .

Located near the train depot(connecting to Atlanta,etc.),is where the downtown area of Toccoa is located. Also located nearby is the Toccoa courthouse. Around the 50's leading up towards the 80's, business was bustling in this "mall" as they called it. Each day people would flood to downtown Toccoa and shop. Back then there were several stores located in the mall, one of those being the Gallant-Belk department store.

During the 70's downtown Toccoa Mall got a new look. White concrete canopies were built around many stores to offer shoppers shade and shelter from rain. This came in handy for a lot of Toccoa's festivals, which otherwise would have been rained out.

Business was going pretty good at the Mall until the 90's era. That's when stores started to either close at the Mall or move. The Gallant-Belk department store also moved to where much of the business was starting to grow, along a four lane road called Big A.

It was at this decline that the city seemed to neglect the Mall. The canopies were seldom cleaned or maintained, the buildings were worn with age, and the downtown area had lost the majority of its key stores. Other businesses did move in, but not many people paid attention to them since most of the business in the town was located on the storeline along Big A road.

Years later in 2006 the canopies were torn down after long debates on whether they should stay or go. Once the debates were over, it was announced that the Downtown Mall would undergo renovations after all the canopies were taken down to preserve the historic past of Downtown. The town leaders also figuered that perhaps it could attract businesess to locate at the Mall. Included in the announcement of renovations was a 2 million dollar renovation of the Historic Toccoa Courthouse, located on the edge of the town Mall. Being just as old as the Mall, it had been in use until recently when a new courthouse was built about 250 feet away. This led to the neglect of the courthouse, with windows being broken and boarded up, the clocktower not working correctly, and infestations in the building.

As of date, (June 2007), the canopies have been torn down completely, and eventually renovations will begin regarding the Mall buildings. The courthouse still hasn't seen much improvement, except for a fresh coat of green paint on the clocktowers dome.