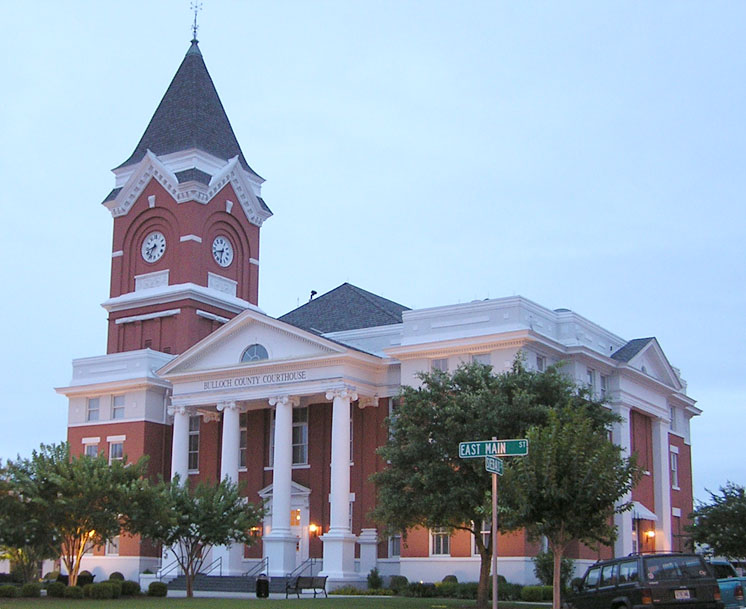 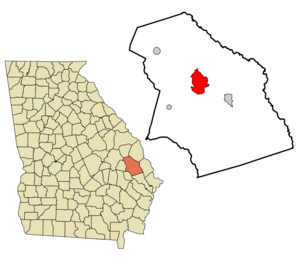 Statesboro is a city in southeast Georgia, , and is the and most populous city of Bulloch County. A , Statesboro is best known as the home to , a Carnegie Doctoral-Research University.The city was chartered in 1803, starting as a small farming community providing the basic essentials for surrounding farms. In 1906 Statesboro leaders joined together to bid for and win First District A&M School, which eventually grew to become . Statesboro provided the inspiration for the blues song "," written by in the 1920s and famously covered by . [ [http://www.visit-statesboro.com/history.htm Statesboro, Georgia Convention and Visitors Bureau ] ]

In 1801, George Sibbald of Augusta donated convert|200|acre|km2 for a centrally located county seat for the growing agricultural community of . In 1803, the Georgia legislature created the town of Statesborough. In 1866 the state legislature granted a permanent charter and changed the spelling of the name to its present form, Statesboro.

During the Civil War and General William T. Sherman's famous march to the sea, a union officer asked a saloon proprietor for directions to Statesboro. The proprietor replied, "You are standing in the middle of town." The soldiers destroyed only the courthouse—a crude log structure that doubled as a barn when court was not in session. After the Civil War, the city began to grow and Statesboro emerged as a major town in southeastern Georgia.

Around the turn of the century, new stores and banks sprang up along the town's four major streets, each named Main. In 1908 Statesboro led the world in sales of long-staple . For each bale of cotton sold in Savannah, ten bales were sold in Statesboro. After the boll weevil decimated the cotton crop in the 1930s, farmers shifted to tobacco. By 1953 more than 20 million pounds of tobacco passed through warehouses in Statesboro, which was then the largest market in the "bright Tobacco Belt" spanning Georgia and Florida.

In 1906, when the state of Georgia announced it would fund an agricultural and mechanical school in Georgia's First Congressional District, more than 100 Statesboro-Bulloch County residents and supporters successfully lobbied for Statesboro as the ideal location, outbidding several other communities. The school continued to grow in the following decades and eventually became , a comprehensive research university with more than 16,000 students. [ [http://www.georgiaencyclopedia.org/nge/Article.jsp?id=h-934 New Georgia E

] ] The area surrounding Georgia Southern University was once called Collegeboro, but was never incorporated and eventually Statesboro grew outward encompassing "Collegeboro" and the university.

There were 8,560 households out of which 17.9% had children under the age of 18 living with them, 21.9% were married couples living together, 13.5% had a female householder with no husband present, and 61.4% were non-families. 31.4% of all households were made up of individuals and 7.3% had someone living alone who was 65 years of age or older. The average household size was 2.27 and the average family size was 2.93.

The economy of Statesboro depends heavily on agriculture and the University. In the 1990’s, a number of major industries moved to Statesboro. Wal-Mart constructed a massive 2.2 million square feet distribution center, the retailer’s largest in the world. [ [http://www.georgiaencyclopedia.org/nge/Article.jsp?id=h-934 New Georgia Encyclopedia: Statesboro ] ] The city is currently experiencing rapid economic growth in commercial/retail expansion and residential developments. The city’s largest employer is Georgia Southern University. Statesboro is a leader in health care in the area with East Georgia Regional Medical Center employing more than 750 employees and 75 physicians representing a wide range of specialties. [ [http://www.sboro.net/index/overview.htm City of Statesboro - Overview ] ] The restaurant chain was founded in Statesboro in 1990. [ [http://www.franchising.com/information/zaxbys/ Zaxby's Franchise Information ] ] The fast food chain celebrated their most successful Grand Opening ever for a single restaurant in Statesboro (as of 12/5/2007)

Statesboro is the home of three institutions of higher education. Two institutions are affiliated with the : , a comprehensive research university with over 17,000 students, and the Statesboro campus of , a community college based in the nearby city of Swainsboro. is located just outside the city limits and is a part of the .

The culture of Statesboro reflects a blend of both its southern heritage and college town identity. The downtown area is currently undergoing a revitalization led in part by the construction of The David H. Averitt Center for the Arts in the Old Bank of Statesboro and Georgia Theater. The center is home to the Emma Kelly Theater named after Statesboro's music legend Emma Kelly the "Lady of 6,000 Songs," [ [http://www.visit-statesboro.com/history.htm Statesboro, Georgia Convention and Visitors Bureau ] ] The center also contains art studios, conference rooms and an exhibition area. In recent years, a number of restaurants and shops have opened in downtown Statesboro. Downtown Statesboro has been featured in several motion pictures including "Now and Then" as well as "1969". [ [http://www.imdb.com/title/tt0114011/locations Now and Then (1995) - Filming locations ] ]

Mill Creek Regional Park is a large outdoor recreational facility with athletic fields and a water park Splash in the Boro.

There are a few s including, The Book and Cranny [http://www.thebookandcranny.com/] , the bookstore, and Books By Dickens [http://www.booksga.com/] .

Because Statesboro is a college town, there are a number of s, bars, and s. During the fall and spring semesters at the university, there are usually bands playing at most of the bars. The restaurants available offer Greek, Italian, Southern, Chinese, Japanese, Mexican, and Italian. Because Bulloch County is a partially dry county, beer and wine can be legally sold wholesale in the city, but not liquor, which is only sold on a per-drink basis in bars. Restaurants are non-smoking by city ordinance and Georgia state law. The has twelve screens showing a variety of current films.

Statesboro is served by a variety of media outlets in print, radio, television, and the Internet. The local newspaper is the Statesboro Herald, a daily with a circulation of about 8,000. Other newspapers include the daily George-Anne produced by students, Connect Statesboro, a weekly entertainment publication, and the , a twice-a-month entertainment publication. In Radio states include, WHKN, WMCD, WPMX, WPTB, WWNS, and WVGS. The City of Statesboro, Georgia Southern University, and Northland Cable have partnered to provide the community with a local government access channel, channel 96. Statesboro Business Magazine, offers Statesboro and area business news, articles, features, jobs, real estate listings and other area business information and reviews.

Channel 96 ( TV in the Boro) was launched in September of 2007. Programming within the first year of broadcast was:

launched their own programming shortly afterwards and broadcasts on their website. They also have built a TV studio to film the shows.

Statesboro has a diverse music scene of its own, with plenty of local artists and acts performing live all around Geogia Southern Campus as well as recording in some of the town's studios. Some of the local artists & performers from or associated with the area are:

is located convert|10|mi|km to the south of Statesboro. Statesboro is also served by three : , which runs north-south through the city, , which runs northwest-south through the city, and , which is the main east-west route through the city. The Veterans Memorial Parkway ( Highway 301 Bypass and Highway 25 Bypass) forms a near circle around the city. Approximately three miles outside of Statesboro is the , which can accommodate private aircraft but does not have a or commercial flights. Most travelers choose to fly from the nearby , which is located convert|45|mi|km to the east and is served by nine commercial airlines. Statesboro is about three hours by highway from the major . Eagle Taxi serves the area.