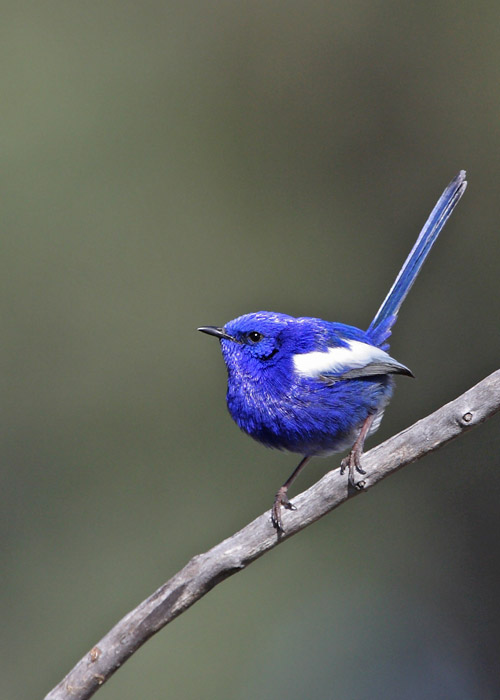 subdivision_ranks=
subdivision=
* "M. l. leucopterus"
* "M. l. leuconotus"
* "M. l. edouardi"The White-winged Fairy-wren ("Malurus leucopterus") is a species of in the family . It lives in the drier parts of central Australia; from central and across to . Like other fairy-wrens, this species displays marked and one or more males of a social group grow brightly coloured plumage during the breeding season. The female is sandy-brown with light-blue tail feathers; it is smaller than the male, which, in breeding plumage, has a bright-blue body, black bill, and white wings. Younger sexually mature males are almost indistinguishable from females and are often the breeding males. A troop of White-winged Fairy-wrens in spring and summer has a brightly coloured older male accompanied by small, inconspicuous brown birds, many of which are also male. Three are recognised. Apart from the mainland subspecies, one is found on , and another on Barrow Island off the coast of Western Australia. Males from these islands have black rather than blue breeding plumage. The White-winged Fairy-wren mainly eats insects, supplementing this with small fruits and leaf buds. It occurs in heathland and arid scrubland, where low shrubs provide cover. Like other fairy-wrens, it is a species, and small groups of birds maintain and defend territories year-round. Groups consist of a socially pair with several helper birds who assist in raising the young. These helpers are that have attained sexual maturity but remain with the family group for one or more years after fledging. Although not yet confirmed genetically, the White-winged Fairy-wren may be and assist in raising the young from other pairings. As part of a , the male wren plucks petals from flowers and displays them to female birds.

A specimen of the White-winged Fairy-wren was first collected by French naturalists and in September 1818, on 's voyage around the . The specimen was lost in a shipwreck, but a painting entitled "Mérion leucoptère" by survived and led to the bird's description in 1824 by French ornithologist . [cite journal | author=Dumont C| year =1824|title =Malurus leucopterus | journal =Dictionnaire des Sciences Naturelles| volume =30| pages =118]

The White-winged Fairy-wren was often referred to as the Blue-and-white Wren, and early observers, such as Norman Favaloro of Victoria, refer to them by this name.

Within the Maluridae, it is one of 12 species in the genus, "". It is most closely related to the Australian , with which it makes up a phylogenetic clade with the of New Guinea as the next closest relative. [Christidis L, Schodde R. 1997, "Relationships within the Australo-Papuan Fairy-wrens (Aves: Malurinae): an evaluation of the utility of allozyme data". "Australian Journal of Zoology", 45 (2): 113–129. ] Termed the "bicoloured wrens" by ornithologist Richard Schodde, these three species are notable for their lack of head patterns and ear tufts and their uniform black or blue plumage with contrasting shoulder or wing colour; they replace each other geographically across northern Australia and New Guinea.

There are three recognised of "Malurus leucopterus". Both black-plumaged forms have been called Black-and-white Fairy-wren.
*"M. l. leuconotus" is endemic to mainland Australia and distinct in that it is the only subspecies to have nuptial males that show prominent blue-and-white plumage.

"M. l. leucopterus" and "M. l. edouardi" are both generally smaller than their mainland relatives, and both subspecies tend to have smaller family groups that consist of only one male and one female, with an occasional helper bird.

Both island subspecies are nearer in to mainland populations of "leuconotus" than to each other;

The distribution of the three bi-coloured fairy-wren species indicates their ancestors lived across New Guinea and northern Australia in a period when sea levels were lower and the two regions were joined by a land bridge. Populations became separated as sea levels rose, and New Guinea birds evolved into the White-shouldered Fairy-wren, and Australian forms into the Red-backed Fairy-wren and the arid-adapted White-winged Fairy-wren.

Measuring 11&ndash;13.5 cm (4⅓&ndash;5⅓ in) in length, White-winged Fairy-wrens are one of the two smallest species of "Malurus".

Fully mature adults are sexually dimorphic, with the male being larger and differing in colour from the female. The adult female is sandy-brown with a very light blue tail, and a pinkish buff bill. The male in breeding plumage has a black bill, white wings and shoulders, and a wholly or black body (depending on subspecies). These contrasting white feathers are especially highlighted in flight and ground displays in breeding season. The male in plumage resembles the female, though it may be distinguished by its darker bill.

Nestlings, fledglings, and juveniles have brown plumage and pink-brown bills with shorter tails than adults. Young males develop blue tail feathers and darker bills by late summer or autumn (following a spring or summer breeding season), while young females develop light blue tails. By the subsequent spring, all males are fertile and have developed protuberances, which store sperm. In contrast, during the breeding season, fertile females develop tous brood patches, which are bare areas on their bellies. Males entering their second or third year may develop spotty blue and white plumage during the breeding season. By their fourth year, males have assumed their nuptial plumage, where the scapulars, secondary wing coverts, and secondary s are white while the rest of their bodies are a vibrant . All sexually mature males moult twice a year, once before the breeding season in winter or spring, and again afterwards in autumn; rarely, a male may moult directly from nuptial to nuptial plumage.

In 1980, Tideman characterised five different patterns of calls among "Malurus leucopterus leuconotus"; these were recognised by Pruett and Jones among the island subspecies "M. l. edouardi". The main call is a reel made by both sexes in order to establish territory and unify the group. It is a long song of “rising and falling notes” that is first signaled by 3&ndash;5 "chip" notes. Although seemingly weak in sound, the reel carries a long way above the stunted shrubland. A harsh "trit" call is often used to establish contact (especially between mothers and their young) and to raise alarm; it is characterised by a series of “loud and abrupt” calls that vary in frequency and intensity. Adults will use a high-pitched peep that may be made intermittently with reels as a contact call to birds that are more distant. Nestlings, fledglings, and females around the nest will use high pips—quiet, high-pitched, and short calls. When used by a mature female, they are mixed with harsh calls. Nestlings may also make “gurgling” noises when they are being fed. The subordinate helpers and feeders may also make this sound.

The White-winged Fairy-wren is well adapted to dry environments, and "M.l. leuconotus" is found throughout and semi-arid environments between latitudes 19 and 32oS in mainland Australia. It occupies coastal Western Australia from around Port Hedland south to Perth, and stretches eastwards over to Mount Isa in Queensland, and along the western parts of the through central Queensland and central western New South Wales, into the northwestern corner of Victoria and the and across the Nullarbor.

The usual form of locomotion is hopping, with both feet leaving the ground and landing simultaneously. However, birds may run when performing the "rodent-run" display.

White-winged Fairy-wrens live in complex social groups. [Rowley & Russell (1997), p. 57] Clans consist of 2&ndash;4 birds, typically one brown or partially blue male and a breeding female. Nest helpers are birds raised in previous years which remain with the family group after fledging and assist in raising young; [Rowley & Russell (1997), p. 88] they may be male that have retained their brown plumage, or female.

Each clan has a specified area of land that all members contribute to foraging from and defending. Frequently, territory sizes, normally 4&ndash;6 ha (10&ndash;15 s), are correlated with the abundance of rain and resources in a region; smaller territories occur where insects and resources are plentiful. Additionally, the feeding territories are larger during the winter months when these birds spend much of their time foraging with the entire clan. White-winged Fairy-wrens occupy much larger territories than other fairy-wren species. [Rowley & Russell (1997), p. 59] Observed in this species,

Both the male and female adult White-winged Fairy-wren may utilise a "rodent-run" display to distract predators from nests with young birds. The head, neck and tail are lowered, the wings are held out and the feathers are fluffed as the bird runs rapidly and voices a continuous alarm call.

The White-winged Fairy-wren is primarily ; its diet includes small s, s, s, es, s, and smaller insects, including s. The larger insects are typically fed to nestlings by the breeding female and her helpers, including the breeding male. Adults and juveniles forage by hopping along the shrubland floor, and may supplement their diets with seeds and fruits of saltbush (""), goosefoot ("") and new shoots of .

Fairy-wrens exhibit one of the highest incidences of extra-pair mating, and many s are brought up a by male who is not the natural father. However, courtship methods among White-winged Fairy-wrens remain unclear. Blue-plumaged males have been seen outside of their territory and in some cases, carrying pink or purple petals, which among other species advertise the male to neighboring females. In contrast, black-plumaged males on Barrow and Dirk Hartog islands often carry blue petals. While petal-carrying outside of clan territories strongly suggests mating with other females is occurring, further genetic analysis is necessary.

During another courtship display the male bows deeply forward facing the female, reaching the ground with his bill and spreading and flattening his plumage in a near-horizontal plane for up to 20 seconds. In this pose, the white plumage forms a striking white band across his darker plumage.

Breeding females begin to build their nests in the spring and construct domed structures composed of , fine , , and vegetable-down, typically 6&ndash;14 cm (2⅓&ndash;5½ in) tall and 3&ndash;9 mm thick. Each nest has a small entrance on one side and they are normally placed in thick shrubs close to the ground. A clutch of 3&ndash;4 eggs is generally laid anywhere from September to January, with incubation lasting around 14 days.

Adults and their young may be preyed upon by mammalian predators, such as the ("Vulpes vulpes") or the ("Felis catus"), and native predatory birds, such as the ("Gymnorhina tibicen"), species ("Cracticus" spp.), ("Dacelo novaeguineae"), s ("Strepera" spp.), s and s ("Corvus" spp.), es ("Colluricincla" spp.) and reptiles such as s.