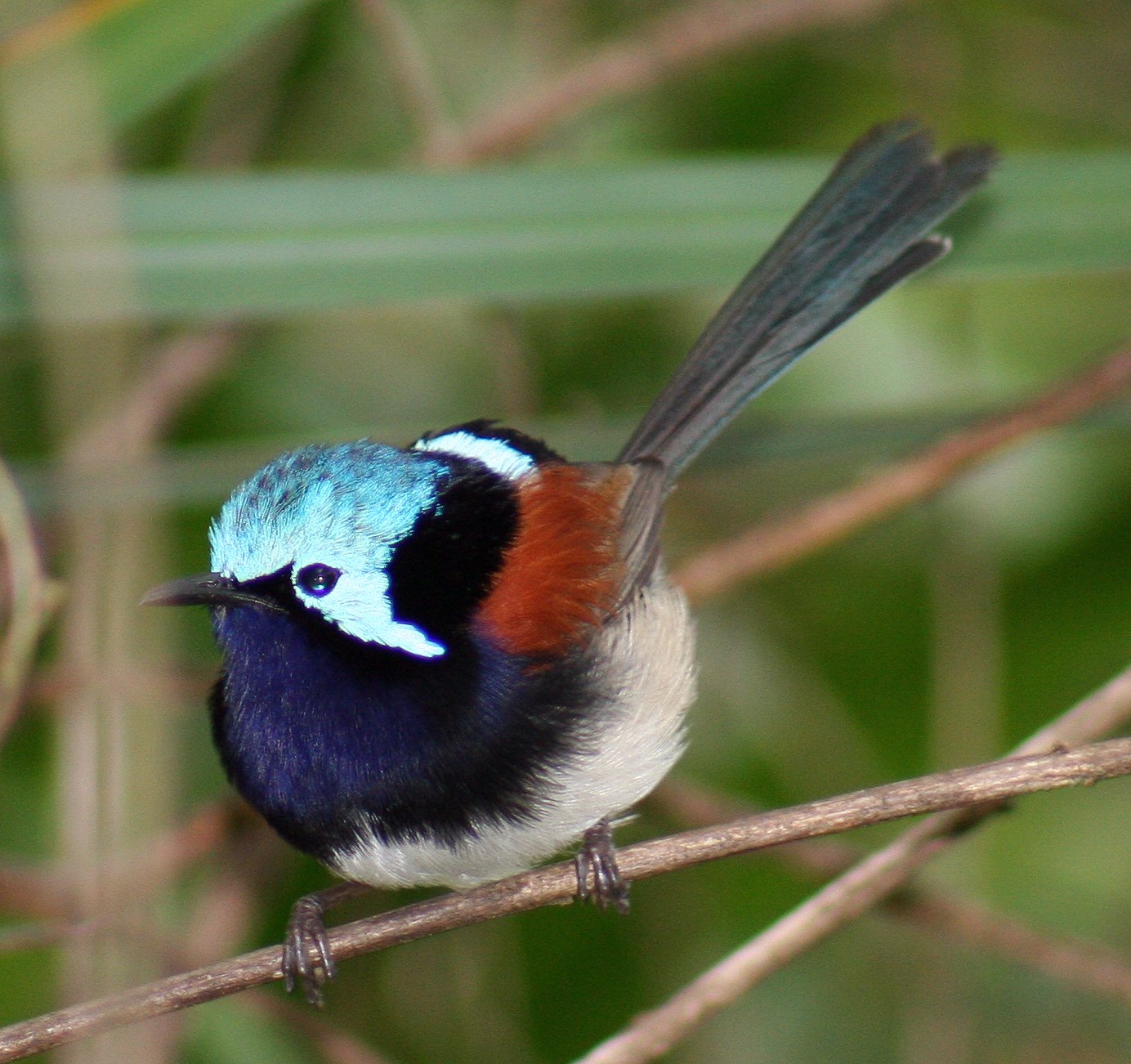 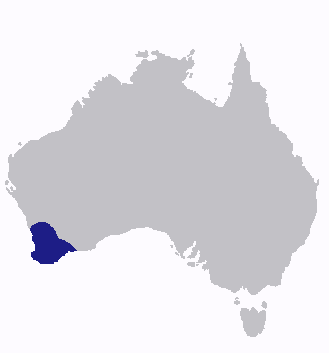 range_map_width = 220px
range_map_caption =Approximate range/distribution map of the Red-winged Fairy-wren. Blue indicates presence.The Red-winged Fairy-wren ("Malurus elegans") is a species of in the family. It is sedentary and endemic to the southwestern corner of . Exhibiting a high degree of , the male adopts a brilliantly coloured breeding plumage, with an iridescent silvery-blue crown, ear coverts and upper back, red shoulders, contrasting with a black throat, grey-brown tail and wings and pale underparts. Non-breeding males, females and juveniles have predominantly grey-brown plumage, though males may bear isolated blue and black feathers. No separate subspecies are recognised. Similar in appearance and closely related to the ("M. lamberti") and the ("M. pulcherrimus"), it is regarded as a separate species as no intermediate forms have been recorded where ranges overlap. Though the Red-winged Fairy-wren is locally common, there is evidence of a decline in numbers.

Bearing a narrow pointed bill adapted for probing and catching insects, the Red-winged Fairy-wren is primarily insectivorous; it forages and lives in the shelter of scrubby vegetation in temperate wetter forests dominated by the Karri (""), remaining close to cover to avoid predators. Like other fairy-wrens, it is a cooperative breeding species, with small groups of birds maintaining and defending small territories year-round. Groups consist of a socially pair with several helper birds who assist in raising the young. There is a higher proportion of female helpers recorded for this species than for other species of fairy-wren. A variety of vocalisations and visual displays have been recorded for communication and courtship in this species. Singing is used to advertise territory, and birds can distinguish other individuals on song alone. Male wrens pluck yellow petals and display them to females as part of a courtship display.

The Red-winged Fairy-wren was officially described by ornithologist in 1837, who derived the bird's specific name derived from the Latin term "elegans" 'elegant'. [cite book |title=The Birds of Australia and the adjacent islands, Part 1|author=Gould J |year=1837 |publisher=J. Gould |location=London] He gave its location as the East Coast, but realised his error after further collections by John Gilbert from Southwestern Australia.Amateur ornithologist described birds from the southern Karri forests as subspecies "warreni" in 1916 on the basis of darker female plumage. [cite journal |author=Mathews GM|year=1916|title=List of additions of new subspecies to, and changes to, my list of the birds of Australia |journal=Austral. Avian Record |volume=3 |pages=25–68] However, others have not observed this subsequently and the consensus is that no separate subspecies are recognized.

It is one of 12 species of the genus "", commonly known as fairy-wrens, found in Australia and lowland .

In his 1982 , Richard Schodde proposed a northern origin for the Chestnut-shouldered Fairy-wren group due to the variety of forms in the north and their absence in the southeast of the continent.

Like other fairy-wrens, the Red-winged Fairy-wren is notable for its marked , males adopting a highly visible breeding plumage of brilliant iridescent blue and chestnut contrasting with black and grey-brown. The brightly coloured crown, ear tufts and upper back are prominently featured in breeding displays.

Both sexes moult in autumn after breeding, with males assuming an non-breeding plumage. They will moult again into nuptial plumage in winter or spring. Body feathers are replaced at both moults while wing and tail feathers are in spring only, though the latter may be replaced at any time if damaged or worn.

Vocal communication among Red-winged Fairy-wrens is used primarily for communication between birds in a social group and for advertising and defending a territory.

Survival of fairy-wrens from one season to the next is generally high for such small birds, and the Red-winged Fairy-wren has the highest rate of all&mdash;with 78% of breeding males and 77% of breeding females surviving from year to year.

Hopping, with both feet leaving the ground and landing simultaneously, is the usual form of locomotion, though birds may run while performing the 'Rodent Run Display' detailed below.

The Red-winged Fairy-wren is a cooperative breeding species, with a pair or small group of birds maintaining and defending a territory year-round. These territories average around 0.4–2.4 s (1–6 s) in optimal habitat of tall Karri forest, although are smaller and restricted to dense riverbank undergrowth in less favourable habitat.The area maintained is large enough to support the group in poor years or to accommodate new members after a good breeding season.

Observed in this species, the 'Wing-fluttering' display is seen in several situations: females responding, and presumably acquiescing, to male courtship displays, juveniles while begging for food, by helpers to older birds, and immature males to senior ones. The fairy-wren lowers its head and tail, outstretches and quivers its wings and holds its beak open silently.

Like all fairy-wrens, the Red-winged Fairy-wren is an active and restless feeder, foraging in ("Pteridium esculentum") and low shrubs, as well as in leaf-litter on the ground near shelter. It will occasionally ascend trees up to convert|5|m|ft|0|abbr=on above the ground in the understorey, particularly in the late summer and autumn as the flaking eucalypt bark is a rich source of s. However, birds are exposed to potential predators and forays are therefore brief. It consumes a wide range of small creatures, mostly insects, eating ants and beetles year-round, and adding spiders, bugs and caterpillars to their diet during breeding season.

Like other fairy-wrens, male Red-winged Fairy-wrens have been observed carrying brightly coloured petals to display to females as part of a courtship ritual. In this species, the petals that have been recorded have been yellow or, rarely, white.

The breeding season is shorter than that of other fairy-wrens, occurring from October (rarely September) through to December. Constructed solely by the female,