Disney's Grand Floridian Resort & Spa is a AAA Four Diamond Award–winning,[1] Victorian themed luxury hotel and spa located at the Walt Disney World Resort in Florida. The property opened on June 28, 1988 as the Grand Floridian Beach Resort. The name changed to Disney's Grand Floridian Resort & Spa during the fall of 1997. The resort contains 867 rooms among six buildings at an average of 400 square feet (37 m²) per room. A standard room can sleep up to five people. The resort is owned and operated by Walt Disney Parks and Resorts.

The Grand Floridian is categorized as a deluxe resort, one of four types of accommodations at the Florida site. The resort is distinguished Disney's flagship and most luxurious resort.[2] The resort has received designation in the Florida Green Lodging Program.[3] 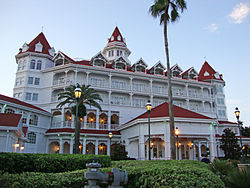 Initially, Walt Disney wanted a Polynesian resort (reflecting Adventureland), the Contemporary Resort to echo Tomorrowland, and other resorts that mirrored the 'lands' of the Magic Kingdom. Main Street and The Grand Floridian act as analogous reflections. The resort was designed by the Disney company and executed by the architectural firm Wimberly, Allison, Tong & Goo.[5]

Along with Disney's Polynesian Resort, the Grand Floridian sits on the shores of the man-made Seven Seas Lagoon near the Magic Kingdom. The hotel occupies land that had been earmarked for an Asian themed resort during the initial development of Walt Disney World Resort in the late 1960s.[6] As of June 2007, smoking is permitted only in designated outdoor smoking locations. In 1992, a 40,000-square-foot (3,700 m2) convention center opened adjacent to the hotel, which contains a business center.

The hotel has completed some major renovations over the last couple years. In 2007, all the guestrooms were redecorated and flat panel televisions were added. The lobby has gone under a major transformation since its beginning. Italian marble was put in to replace dated tiles. There are even some mosaics of Disney characters near common places such as the main entrance, monorail station, and elevators with new carpet installed in May 2010. During evening hours, a band plays on the second floor balcony for about 3 hours alternating with a pianist.

The Grand floridian property as viewed from the Magic Kingdom.

In March 2011, plans of a potential addition to the Grand Floridian Resort surfaced on the internet.[10][11][12] Architectural renderings show a new wing on the southern tip of the property that may be used for Disney Vacation Club villas, as well as a new parking lot for Disney's Wedding Pavilion and Grand Floridian Health Club. There has been no confirmation of these rumors, but if true, the Grand Floridian would be home to the second Vacation Club property on a monorail resort, following Bay Lake Tower at Disney's Contemporary Resort which opened in 2009. Beginning on September 19th, the Grand Floridian's Spa will be closed for 18 months due to this expansion.