Motorways and roads in Cyprus

Motorways and roads in Cyprus

Since the arrival of the first motor cars on the island in 1907[1], Cyprus has developed one of the most modern road networks in Europe. According to 2002 statistics, the road network in the free areas of Cyprus consists of about 7,206 km of paved and 4,387 km of unpaved roads. Although the first motorway in Cyprus, A1, was completed as recently as October 1985, the country already has the most motorway km per capita (38.6km /100,000 inhabitants) amongst all European Union members.[2] There are no toll paying roads in Cyprus to date.

The Turkish invasion of 1974 radically changed the program of road development and created new priorities in order to cover the augmented needs in the government controlled areas, where 80% of the Cyprus population and the greatest portion of development had concentrated.

Under these circumstances New Road Development Schemes were promoted, which were partially financed by foreign Financing Organizations. Under these development projects new 4 lane motorways were constructed and more are on their way as follows: 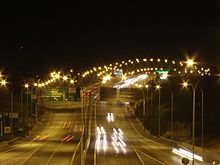 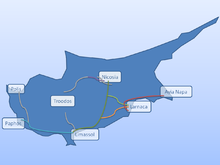 The highway network is continuously developed. The first section of the A9 Nicosia - Astomeritis Motorway between Kokkinotrimithia and Akaki has been completed, whereas the rest is under construction. Also the upgrading of the Limassol Junctions is completed.

The following are under design: 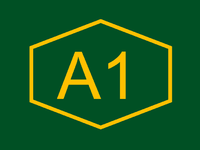 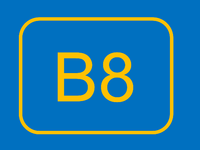 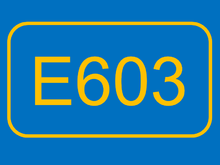 Preliminary and feasibility studies are conducted for the:

Roads and Motorways in Cyprus can be classified into 5 main categories:

Part of this article was copied from Cyprus's Press and Information office multimedia software "Aspects of Cyprus".