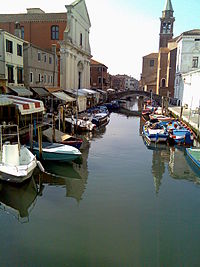 Chioggia (Venetan: Cióxa, Latin: Clodia) is a coastal town and comune of the province of Venice in the Veneto region of northern Italy.

The town is situated on a small island at the southern entrance to the Lagoon of Venice about 25 km south of Venice (50 km by road); causeways connect it to the mainland and to its frazione of Sottomarina. The population of the comune is around 51,000, with the town proper accounting for about half of that and Sottomarina for most of the rest.

Chioggia and Sottomarina were not prominent in antiquity, although they are first mentioned in Pliny [1] as the fossa Clodia. Local legend attributes this name to its founding by a Clodius, but the antiquity of this belief is not known.

The name of the town has been changing depending on the historical period, being Clodia, Cluza, Clugia, Chiozza and Chioggia.[2] The most ancient documents naming Chioggia dates from the 6th century AD, when it was part of the Byzantine Empire. Chioggia was destroyed by the King Pippin of Italy in the 9th century, but rebuilt around a new industry based on salt pans. In the Middle Ages, Chioggia proper was known as Clugia major, whereas Clugia minor was a sand bar about 600 m further into the Adriatic. A free commune and an episcopal see from 1110, it had later an important role in the so-called War of Chioggia between Genoa and Venice, being conquered by Genoa in 1378 and finally by Venice in June 1380. Although the town remained largely autonomous, it was always thereafter subordinate to Venice. On 14th of March 1381, Chioggia concluded an alliance with Zadar and Trogir against Venice, and finally Chioggia became better protected by Venice in 1412, because Šibenik became in 1412 the seat of the main customs office and the seat of the salt consumers office with a monopoly on the salt trade in Chioggia and on the whole Adriatic Sea.

Until the 19th century, women in Chioggia wore an outfit based on an apron which could be raised to serve as a veil. Chioggia is also known for lace-making; like Pellestrina, but unlike Burano, this lace is made using bobbins.

Chioggia served Carlo Goldoni as the setting of his play Le baruffe chiozzotte, one of the classics of Italian literature: a baruffa was a loud brawl, and chiozzotto (today more frequently chioggiotto in Italian, or cioxoto in Venetan) is the demonym for Chioggia. Goldoni took his setting seriously: the play is replete with lacemaking, fishermen, and other local color.

Chioggia is a miniature version of Venice, with a few canals, chief among them the Canale Vena, and the characteristic narrow streets known as calli. Chioggia has several medieval churches, much reworked in the period of its greatest prosperity in the 16th and 17th centuries.

The church of S. Maria, founded in the eleventh century, became a cathedral in 1110, then was rebuilt from 1623 by Baldassare Longhena.

The church of St. Andrew (18th century) has a bell tower from the 11th-12th centuries, provided with the most ancient tower watch in the world. The interior has a Crucifixion by Palma the Elder.

Fishing is historically the livelihood of the port, and remains a significant economic sector. Other important modern industries include textiles, brick-making and steel; and Sottomarina, with 60 hotels and 17 campgrounds, is almost entirely given over to seafront tourism.

Chioggia is twinned with:

Chioggia gives its name to a variety of Beetroot and Radicchio (Italian chicory).