Samuel Phillips Huntington (April 18, 1927 – December 24, 2008) was an influential American political scientist who wrote highly-regarded books in a half-dozen sub-fields of political science, starting in 1957. He gained wider prominence through his Clash of Civilizations (1993, 1996) thesis of a post-Cold War new world order.

Huntington was born on April 18, 1927, in New York City, the son of Dorothy Sanborn (née Phillips), a short-story writer, and Richard Thomas Huntington, a publisher of hotel trade journals.[1][2] His grandfather was publisher John Sanborn Phillips. He graduated with distinction from Yale University at age 18, served in the U.S. Army, earned his Master's degree from the University of Chicago, and completed his Ph.D. at Harvard University where he began teaching at age 23.[3] He was a member of Harvard's department of government from 1950 until he was denied tenure in 1959.[4] From 1959 to 1962 he was an associate professor of government at Columbia University where he was also Deputy Director of The Institute for War and Peace Studies. Huntington was invited to return to Harvard with tenure in 1963 and remained there until his death. He was elected a Fellow of the American Academy of Arts and Sciences in 1965.[5] Huntington and Warren Demian Manshel co-founded and co-edited Foreign Policy. Huntington stayed as co-editor until 1977.[6]

His first major book was The Soldier and the State: The Theory and Politics of Civil-Military Relations, (1957) which was highly controversial when it was published, but today is regarded as the most influential book on American civil-military relations.[7][8][9] He became prominent with his Political Order in Changing Societies (1968), a work that challenged the conventional view of modernization theorists, that economic and social progress would produce stable democracies in recently decolonized countries. As a consultant to the U.S. Department of State, and in an influential 1968 article in Foreign Affairs, he advocated the concentration of the rural population of South Vietnam as a means of isolating the Viet Cong. He also was co-author of The Crisis of Democracy: On the Governability of Democracies, a report issued by the Trilateral Commission in 1976. During 1977 and 1978, in the administration of Jimmy Carter, he was the White House Coordinator of Security Planning for the National Security Council.

In 1968, just as the United States' war in Vietnam was reaching its apex, Huntington published Political Order in Changing Societies, which was a critique of the modernization theory which had driven much US policy in the developing world in the prior decade.

In the 1970s, Huntington applied his theoretical insights as an advisor to governments, both democratic and dictatorial. In 1972, he met with Medici government representatives in Brazil; a year later he published the report "Approaches to Political Decompression", warning against the risks of a too-rapid political liberalization, proposing graduated liberalization, and a strong party state modeled upon the image of the Mexican Institutional Revolutionary Party (PRI). After a prolonged transition, Brazil became democratic in 1985.

In the 1980s he became a valued adviser to the South African regime, which used his ideas on political order to craft its "total strategy" to reform apartheid and suppress growing resistance. He assured South Africa's rulers that increasing the repressive power of the state (which at that time included police violence, detention without trial, and torture) can be necessary to effect reform.[citation needed] The reform process, he told his South African audience, often requires "duplicity, deceit, faulty assumptions and purposeful blindness." He thus gave the imprimatur of American social science to his hosts' project of "reforming" apartheid rather than eliminating it.[10]

Huntington frequently cited Brazil as a success, alluding to his role in his 1988 presidential address to the American Political Science Association, commenting that political science played a modest role in this process. Critics, such as British political scientist Alan Hooper, note that contemporary Brazil has an especially unstable party system, wherein the best institutionalized party, Luiz Inácio Lula da Silva's Workers' Party emerged in opposition to controlled-transition. Moreover, Hooper claims that the lack of civil participation in contemporary Brazil stems from that top-down process of political participation transitions.

The Third Wave of Democratization

In his 1991 book with the same title, he makes the argument that beginning with Portugal's revolution in 1974, there has been a third wave of democratization which describes a global trend which includes more than 60 countries throughout Europe, Latin America, Asia, and Africa which have undergone some form of democratic transition.

The Clash of Civilizations

For more details on this topic, see Clash of Civilizations. 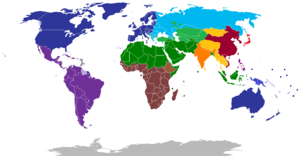 A map of civilizations, based on Huntington's "Clash of Civilizations". Western (dark blue), Latin (purple), Japanese (bright red), Sinic (dark red), Hindu (orange), Islamic (green), Orthodox (medium-light blue), African (Brown). Other colors should indicate (light green, yellow, turquoise) the cultural fault lines where the clash of civilizations will occur. Note on the Eastern European level; Transylvania (from Romania), Western Ukraine, northern Serbia and others are in the "Western world" according to the original work of Huntington.

In 1993, Huntington provoked great debate among international relations theorists with the interrogatively-titled "The Clash of Civilizations?", an extremely influential, oft-cited article published in Foreign Affairs magazine. Its description of post-Cold War geopolitics contrasted with the influential End of History thesis advocated by Francis Fukuyama.

Huntington expanded "The Clash of Civilizations?" to book length and published it as The Clash of Civilizations and the Remaking of World Order in 1996. The article and the book posit that post-Cold War conflict would most frequently and violently occur because of cultural rather than ideological differences. That, whilst in the Cold War, conflict likely occurred between the Capitalist West and the Communist Bloc East, it now was most likely to occur between the world's major civilizations — identifying seven, and a possible eighth: (i) Western, (ii) Latin American, (iii) Islamic, (iv) Sinic (Chinese), (v) Hindu, (vi) Orthodox, (vii) Japanese, and (viii) the African. This cultural organization contrasts the contemporary world with the classical notion of sovereign states. To understand current and future conflict, cultural rifts must be understood, and culture — rather than the State — must be accepted as the locus of war. Thus, Western nations will lose predominance if they fail to recognize the irreconcilable nature of cultural tensions.

Critics (for example articles in Le Monde Diplomatique) call The Clash of Civilizations and the Remaking of World Order the theoretical legitimization of American-led Western aggression against China and the world's Islamic and Orthodox cultures. Other critics argue that Prof. Huntington's taxonomy is simplistic and arbitrary, and does not take account of the internal dynamics and partisan tensions within civilizations. Furthermore, critics argue that Huntington neglects ideological mobilization by elites and unfulfilled socioeconomic needs of the population as the real causal factors driving conflict, that he ignores conflicts that do not fit well with the civilizational fault lines identified by him, and they charge that his new paradigm is nothing but realist thinking in which "states" became replaced by "civilizations".[11] Huntington's influence upon U.S. policy has been likened to that of British historian A.J. Toynbee's controversial religious theories about Asian leaders in the early twentieth century.

The New York Times obituary on Samuel Huntington notes, however, that his "emphasis on ancient religious empires, as opposed to states or ethnicities, [as sources of global conflict] gained...more cachet after the Sept. 11 attacks."[12]

Who Are We and immigration

Huntington's last book, Who Are We? The Challenges to America's National Identity, was published in May 2004. Its subject is the meaning of American national identity and the possible cultural threat posed to it by large-scale Latino immigration, which Huntington warns could "divide the United States into two peoples, two cultures, and two languages".

Huntington is credited with coining the phrase Davos Man, referring to global elites who "have little need for national loyalty, view national boundaries as obstacles that thankfully are vanishing, and see national governments as residues from the past whose only useful function is to facilitate the elite's global operations". The phrase refers to the World Economic Forum in Davos, Switzerland, where leaders of the global economy meet.[13]

The National Academy of Sciences controversy

In 1986, Huntington was nominated for membership to the National Academy of Sciences, with his nomination voted on by the entire academy, with most votes, by scientists mainly unfamiliar with the nominee, being token votes. Professor Serge Lang, a Yale University mathematician, disturbed this electoral status quo by challenging Huntington's nomination. Lang campaigned for others to deny Huntington membership, and eventually succeeded; Huntington was twice nominated and twice rejected. A detailed description of these events was published by Lang in "Academia, Journalism, and Politics: A Case Study: The Huntington Case" which occupies the first 222 pages of his 1998 book Challenges.[14]

In the book Political Order in Changing Societies that Huntington published in 1968 he used, Lang alleged, pseudo-mathematical arguments to argue that in the 1960s South Africa was a "satisfied society". Lang didn't believe the conclusion, so he looked at how Huntington justified this claim and concluded that he used methodology which was simply not valid. Lang suspected that he was using false pseudo-mathematical argument to give arguments that he wanted to justify greater authority. It was, said Lang, ...

... a type of language which gives the illusion of science without any of its substance.

Huntington's prominence as a Harvard professor and (as then) Director of Harvard's Center for International Affairs contributed to much reportage by The New York Times newspaper and The New Republic magazine of his defeated nomination to the NAS.

Lang was inspired by the writings of mathematician Neal Koblitz who accused Huntington of misusing mathematics and engaging in pseudo-science. Lang claimed that Huntington distorted the historical record and used pseudo-mathematics to make his conclusions appear convincing. Lang documents his accusations in his book Challenges.

Huntington’s supporters included Herbert Simon, a 1978 Nobel Laureate in Economics. The Mathematical Intelligencer offered Simon and Koblitz an opportunity to engage in a written debate, which they accepted.

15. Nikolaos A. Denaxas, The clash of civilizations according to Samuel Huntington - Orthodox critisism, 2008. (in Greek)