The Mystery of the Druids

The Mystery of the Druids

The Mystery of the Druids is a single-player adventure video game developed by House of Tales Entertainment and published by cdv Software Entertainment. The game was released on September 14, 2001 for Microsoft Windows.

The story takes place in Britain, where Detective Brent Halligan, an inspector at Scotland Yard, investigates a brutal series of murders committed in England. The investigation leads Detective Halligan into a mystery surrounding the demise of the British Order of Druids and eventually takes him on a trip through time itself. 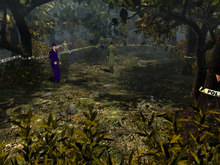 A large portion of the game-play in The Mystery of the Druids consists of discovering clues and solving puzzles. Clues are mainly found by moving the computer mouse over various objects on the screen and clicking them to add them to the inventory or gain information about them. Puzzles are often inventory based and usually solved by combining items, after which the player must figure out how the item is used. Many actions in the game require the completion of such puzzles, such as using a telephone.[5]

The Mystery of the Druids is set in England and France, where a series of brutal killings known as the "Skeleton Murders" have been taking place. This has caused panic and placed Scotland Yard under heavy scrutiny.

The second half of the game is mainly set in England circa 1000 AD, where Detective Brent Halligan and Dr. Melanie Turner attempt to stop a ritual which could enslave humanity. The finale is set in the year 2000 AD. at Stonehenge, where the Circle is attempting to complete the Final Ritual.

The Mystery of the Druids begins with a dark ceremony at Stonehenge in 1000 AD, where all but a few of the druids are enveloped in a supernatural glow before being consumed by fire.

1000 years later in the year 2000, at New Scotland Yard in London, Detective Brent Halligan has been assigned to investigate a series of brutal murders known as the "Skeleton Murders". Assisting him with his investigation is Dr. Melanie Turner, an anthropologist at the Oxford Anthropological Museum, who, along with historian Arthur Blake, discovers that the murders match the description of cannibalistic sacrificial rites performed by Britannic druids. It is later revealed that a demonic superior druid seized power over the druids in order to force mankind to submit to his rule by performing a "final ritual", which would transfer the knowledge and power of the druids to five infants known as the "Inheritors". The ritual was not entirely completed, but the Inheritors are strong and powerful enough to complete the ritual themselves.

While investigating a lead regarding a group of neo-Druids called "The Circle", Halligan is captured and held prisoner by their leader, Lord Sinclair. Halligan escapes, but discovers The Circle performing a human sacrifice and faints. Halligan awakens at dinner and, unbeknownst to him, is eating human flesh which grants strength and power, but also makes them susceptible to brainwashing.

Turner is led to Lord Sinclair's estate through information which Halligan had left at her museum, after which she is able to sneak in to the property. She finds an artifact, the Amulet of Transformation, which may be required to complete the Final Ritual. Halligan discovers her and a fight ensues before she is able to knock him unconscious. As he awakens, he discovers that he was brainwashed. He discerns Sinclair's plan, which is to put a curse on the world in order to enslave humanity.

Blake is killed by Sinclair, but he points them in the direction of the Twelve Bridges ruins. Once there, Halligan and Turner are sent back in time. Halligan stumbles on the site of the ritual and attempts to disrupt it, but is interrupted by the demonic druid Serstan, who holds Turner hostage. A staff that Halligan had found is bartered for Turner's life and a promise, on his honor, not to harm Halligan or Turner. Serstan agrees and begins the ritual, whereupon Halligan and Turner are transported back to their own time.

Halligan and Turner rush to Stonehenge where The Circle is attempting to complete the final ritual. Halligan stabs Turner with scissors and informs Serstan that the vow has been broken, causing Serstan to intervene and cause the Circle to disappear and preventing the ritual from being completed. Turner is near death, but Halligan is able to save her using magical mistletoe, after which they share a kiss.

If Dr. Turner is noticed while trying to rescue Detective Halligan, Lord Sinclair's security will capture her. She is brought inside, where a brainwashed Halligan, who does not seem to recognize her, informs her that she will be the guest of honor for their dinner. A few days later, the skeleton of Turner is found in a forest near London. Halligan is listed as missing and last seen leaving his Scotland Yard department.

A playable game demo was released on May 25, 2001[11] which featured game-play up to the Anthropology Museum in Oxford.[12] A second game demo was released later that year on September 25, which included the time travel scene to prevent the ancient ritual which resulted in the creation of the Inheritors.[13]

The Mystery of the Druids received mostly negative reviews. Brett Todd of Computer Games Magazine proclaimed it "poorly designed, ugly, and rife with bugs."[20] Computer and Video Games derided its "unimaginative settings and painful dialogue" as well as its inclusion of "some of the most ridiculously complex puzzle sequences to achieve even the simplest of tasks" before deciding that it has "very little appeal for anyone but the most patient and geeky PC-head."[19] GameSpot described its characters as "rude", its puzzles and dialogue branches as "confusing", and the game overall as "surprisingly devoid of plot."[6] GameSpy described it as being a game that might make customers "take matters into their own hands and put the [adventure game] genre out of its misery".[8] IGN described its repetitive game-play as being "[stretched] out considerably (and not in a good Tantric kind of way, mind you)", stating "if you go back knowing what to do, you could beat the game in half a day."[7]

Game Over Online was more positive, saying it "provides everything an adventure needs to provide -- no more and no less -- and is therefore worthwhile to play for that reason." They praised The Mystery of the Druids for its graphics and background locations, especially those of "some places, like Halligan’s office" while noting that developer House of Tales "made other locations look just a little bit too regular and symmetrical to feel real."[5]