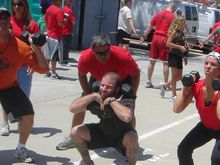 CrossFit is a strength and conditioning brand that combines weightlifting, sprinting, gymnastics, powerlifting, kettlebell training, plyometrics, rowing, and medicine ball training.[1] CrossFit contends that a healthy, fit person requires proficiency in each of ten general physical skills: cardiovascular/respiratory endurance, stamina, strength, flexibility, power, speed, agility, balance, coordination, and accuracy.[2] It defines fitness as increased work capacity across all these domains and says its program achieves this by provoking neurologic and hormonal adaptations across all metabolic pathways.[3][4][5][6]

CrossFit practitioners may train at gyms affiliated with CrossFit (often referred to as "boxes") or on their own.[16][17] CrossFit workouts are commonly centered around a "Workout of the Day" or "WOD".[18] Affiliates typically create a new WOD each day, while those who follow the CrossFit methodology without attending an affiliated gym often follow WODs posted on the main CrossFit website or that of an affiliated gym.[17]

Classes at affiliated gyms typically include a warm-up, a skill development segment, and a high-intensity workout that lasts around ten to twenty minutes.[19] Affiliates often use scoring and ranking systems in an effort to transform workouts into sport. Some affiliates offer additional classes which are not centered around a WOD, such as Olympic weightlifting classes.[20]

CrossFit Inc. certifies CrossFit trainers and licenses the CrossFit name to gyms. Affiliates are free to develop their own programming, pricing, and instructional methods. Many CrossFit athletes and trainers see themselves as part of a contrarian, insurgent movement that questions conventional fitness wisdom.[17][21] [22] CrossFit is noteworthy for its use of a virtual community Internet model.[23][24] The company says this de-centralized approach shares some common features with open source software projects and allows best practices to emerge from a variety of approaches,[25] a contention that is disputed by some subject matter experts, competitors, and even affiliates who have parted company with CrossFit.[26] CrossFit adaptations include programs for children, pregnant women, seniors, football players, military special forces candidates, and endurance athletes including triathletes, runners, swimmers and rowers.[7] CrossFit has been adopted by U.S. and Canadian high school physical education teachers, high school and college teams, and a major league baseball team.[27][28][29][30]

Competitors from around the world have competed in the annual "CrossFit Games" since 2007. In July 2010, the male and female champions each won $25,000.[31] CrossFit asserts that the Games are a laboratory for human performance that may suggest which variants of its methodology work best.

Beginning in 2011, the Games were opened up for competitors all over the world by turning the sectional event into an online format. Athletes will have six different workouts to complete in a week-to-week manner, with only one workout being released at a time and the next workout being released following the close of the previous workout. Athletes are able to submit their scores by either completing the workout at a registered affiliate, who will then submit the score, or by sending in a video of themselves completing the workout which would then be reviewed.

Thirteen different regional divisions in North America and South America (North West, Canada West, Canada East, North Central, Central East, North East, Mid Atlantic, South East, South Central, South West, Socal, Norcal and Latin America) and four regional divisions in the rest of the world (Europe, Asia, Africa and Australia) have been set up to find the best in each region to compete in the Games. The top athletes from the sectional event will face off in a regional event, based on the region that they register in, held on a designated weekend. The top athlete(s) from each region will then be eligible to compete in the CrossFit Games. Past winners and the top five athletes of the previous years Games are automatically eligible.

Dr. Tony Webster of the Pacific Institute for Sports Medicine at Camosun College in Victoria, British Columbia suggests CrossFit be used "safely and sensibly" and finds some support for the program in current academic research: "It’s safe to say that a CrossFit-style program performed three-to-five times per week will almost certainly provide a weekly dose of “vigorous” aerobic exercise that will easily satisfy current public-health guidelines. More and more research studies are demonstrating the efficiency of shorter high-intensity exercise bouts in improving not only fitness but also a whole range of health markers. In fact, plenty of scientific evidence suggests vigorous activity has inherently greater health benefits than moderate activity. Used safely and sensibly, I believe CrossFit has potential not just to change people’s lives, but also to change the fitness industry for the better."[36]

The editors of PureHealthMD writing for Discovery Health Channel found CrossFit "equals better fitness and stronger muscles in a more reasonable amount of time" compared to trying to "build muscle and get in shape by spending 60 minutes or more in the gym several days a week..." Their conclusion was that the program "is a different type of exercise routine ...a well-rounded and very efficient way to achieve a higher level of fitness ...that does not need a whole lot of fancy equipment, but does offer a nice variety to keep the interest level up and provide the challenge needed to keep the exercise fun."[37]

A person, who had suffered injuries while performing a CrossFit workout on Dec 11, 2005, at Manassas World Gym in Manassas, VA under the supervision of an uncertified trainer,[38] claimed that CrossFit poses an elevated risk of rhabdomyolysis. He successfully sued his trainers and was awarded $300,000 in damages.[39] According to Dr. Stuart McGill, a professor of spine biomechanics at the University of Waterloo, the risk of injury from some CrossFit exercises outweighs their benefits when they are performed with poor form in timed workouts. He added there are similar risks in other exercise programs but noted that CrossFit's online community enables athletes to follow the program without proper guidance, increasing the risk.[40] Because of the perceived risks of Crossfit, it has been difficult for many trainers and affiliates to get insurance.  As a result, Crossfit has established a risk retention group (RRG). An RRG is a form of self-insurance that is common among professionals that engage in high risk activities, such as law enforcement officers, emergency medical workers, and contractors.

Articles on many websites criticize CrossFit for lack of periodization, illogical or random exercise sequences, and lacking quality-control accreditation standards for trainers and affiliates.[41][42][26] Crossfit Level 2 and other specialty seminars are not yet certified.[43][44]

CrossFit vigorously disputes the criticism of its exercise methodology. Crossfit Level 1 trainers are certified through the American National Standards Institute. Starting in May 2005,[45] CFHQ has published numerous free articles in the online CrossFit Journal about Rhabdomyolysis,[46][47][48][49] three of which are also included in the CF Manual provided to all prospective trainers.[50]