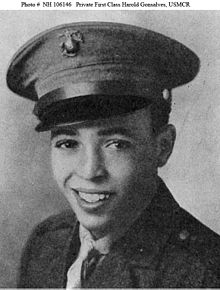 Also known as the Northern Training Area (NTA), the Jungle Warfare Training Center (JWTC) occupies 17,500 acres (71 km2) of jungle in Northern Okinawa. The hilly and rugged terrain, topped with single and double canopy forest has been challenging U.S. Marines in the art of jungle warfare for over 50 years. Established in 1958 as a Counter Guerilla school in the early years of the Vietnam War, the area offers the same challenges that prepared our predecessors for operations in Southeast Asia. Over the years the base camp at NTA gradually evolved from a few Quonset huts and other small buildings to the present facility today completed in 1984. On November 5, 1986, the base camp was officially named Camp Gonsalves, in memory of PFC Harold Gonsalves who was posthumously awarded the Medal of Honor for his heroic actions during the Battle of Okinawa. In March 1998, to better convey NTA as a training base, the name was officially changed to the Marine Corps Jungle Warfare Training Center. Today JWTC is the only Department of Defense jungle training facility in existence.

The Jungle Warfare Training Center provides expert instruction to prepare Marine and Joint Forces for the rigors of combat in a dense jungle environment. Building upon small unit leadership, a tactical mindset and unit cohesion our instructors instill confidence, bolster leadership, and challenge all individuals who train aboard JWTC.

The Jungles Leaders course is designed to develop small unit leaders in all aspects of small unit combat operations and basic survival skills in the jungle. It combines the previously taught Jungle Survival Course period of instruction with comprehensive basic warfighting skills. to take part in the Jungle Leaders Course, the Jungle Skills Course is a prerequisite. The target of the course is for small unit leaders (Team Leaders through Platoon Commanders or equivalent) from any Military Occupational Specialty (MOS). The course consists of six total days consisting of five training days. Training up to 25 personnel, a few classes taught in the Jungle Leaders course are patrol orders, patrol ordrs, patrolling, jungle casevac (Personnel Extraction), survival skills, defense and executing patrol bases.

Marines learn how to negotiate an obstacle on the E-Course

The Jungle Endurance Course is the culminating point of the Jungle Skills Course. Classes taught through the five-day Jungle Skills course are utilized throughout the E-Course. In 12–18-man teams, students traverse 3.8 miles (6.1 km) of dense jungle and rugged terrain. Using teamwork and perseverance, teams compete with one another across 31 obstacles spread along the course. Teams face hasty rappels, rope obstacles, water obstacles and a stretcher carry to complete the entire course.

Originally scheduled for December 2008, a fifty-one percent land reversion of the Jungle warfare Training Center to the Government of Japan is an on-going process. Plans for the reversion include building new landing zones, and the expansion of existing LZ's.

With the backing of the 3rd Marine Division, JWTC is in a transition of becoming a TECOM (Training and Education Command) school. New courses and curriculum are currently under development to encompass a Jungle Tracking Course, Jungle Trauma Course, and a Jungle medicine Course. With the expansion of courses also comes the planning for enclosed classrooms, better teaching equipment, as well as many other various buildings and teaching aids.

Following the 1999 crash of a United States military helicopter near Takae district's elementary school, local villagers started a sit-in campaign to block further construction of helipads in the area. When construction officials arrived to start building the new pads in 2007, they were met by protesters who surrounded the trucks and staged a sit-in. After a long stand-off, the prefectural police arrived and they ordered the construction to be halted since it was placing the lives of the protesters in danger.

Since 2007, approximately 10,000 people have participated in the sit-ins at three sites in the area. In 2008, the Japanese government attempted to serve injunctions against 15 participants. While, 13 of the injunctions were thrown out of court, the remaining two have yet to be decided.

JWTC has 17,500 acres (71 km2) of single and double canopy jungle over very rugged terrain. Being part of the Nansei islands subtropical evergreen forests, most of the area surrounding JWTC is designated as a national forest by the Government of Japan. JWTC is home to 24 endangered species including the Okinawa Rail, Amami Woodcock, Pryers Woodpecker and the Ryukyu Robin. Also residing at JWTC are three species of pit viper poisonous snakes, the Okinawa habu, Himehabu, and the Sakishima Habu. JWTC supports ongoing and extensive efforts by the local Government of Japan's mongoose capturing project.

Following the 2006 disclosure that the United States military had made widespread use of the defoliant Agent Orange in the jungle training center during the 1960s, local citizens have called for an investigation into the current use of chemical and biological weapons within the camp. The region supplies the densely-populated south of the island with drinking water and the impact on the islanders' long term health is of grave concern.