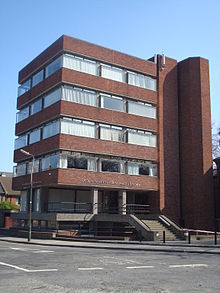 The Dublin Institute for Advanced Studies (DIAS) (Irish: Institiúid Ard-Léinn Bhaile Átha Cliath) Dublin, Ireland was established in 1940 by the Taoiseach (Prime Minister) of the time, Éamon de Valera under the Institute For Advanced Studies Act, 1940. The Institute consists of 3 schools: The School of Theoretical Physics, the School of Cosmic Physics and the School of Celtic studies. The directors of these schools are currently Professor Werner Nahm, Professor Luke Drury and Professor Pádraig Breatnach. The Institute under the act is empowered to "train students in methods of advanced research" but does not itself award degrees; graduate students working under the supervision of Institute researchers can, with the agreement of the governing board of the appropriate school, be registered for a higher degree in any university worldwide.

Shortly after becoming Taoiseach, Éamon de Valera investigated the possibility of setting up an institute of higher learning. Being of mathematical background, de Valera was aware of the decline of the Dunsink Observatory, where Sir William Rowan Hamilton (regarded as Ireland’s most influential mathematician) had held the position of Royal Astronomer of Ireland. Following meetings with prominent academics in the fields of mathematics and astronomy, he came to the conclusion that astronomy at Dunsink should be revived and an institute for higher learning should be established.

The Institute is modeled on the Institute for Advanced Study in Princeton, New Jersey, which was founded in 1930, and theoretical physics was still the research subject in 1940. Most importantly, Erwin Schrödinger was interested in coming to Ireland, and this represented an opportunity not to be missed. The School of Celtic Studies owes its founding to the importance de Valera accorded to the Irish language. He considered it a vital element in the makeup of the nation, and therefore important that the nation should have a place of higher learning devoted to this subject.

The founding of the Institute was somewhat controversial, since at the time only a minority were successfully completing elementary education, and university education was for the privileged. By this reasoning, the creation of a high-level research institute was a waste of scarce resources. However, Éamon de Valera was aware of the great symbolic importance such a body would have on the international stage for Ireland. This thinking influenced much of de Valera's premiership (see history of the Republic of Ireland).

Work by the Geophysics section of the School of Cosmic Physics on the formation of the North Atlantic demonstrated that the Irish continental shelf extended much further than previously thought, thereby more than doubling the area of the seabed over which Ireland can claim economic exploitation rights under the international law of the sea. Fundamental work in statistical mechanics by the School of Theoretical Physics has found application in computer switching technology and led to the establishment of an Irish campus company to exploit this intellectual property. The Institute has also in recent years been one of the main agents helping to set up a modern e-Infrastructure in support of all Irish research.

In 1968 the Royal Society recognised de Valera's contribution to science in establishing the Institute by electing him to honorary fellowship.

The School of theoretical Physics initially consisted of just one member, Professor Erwin Schrödinger, who moved into 65 Merrion Square in February 1941. Schrödinger began his duties as director of the school by giving two courses on quantum theory. Up to this time there had not been courses of this level available in Ireland. The lecture series were at two levels, the lower level including introductory wave mechanics, perturbation theory of quantum mechanical systems, spin of the electron and Dirac's relativistic wave equation. The higher level provided an introduction to the research being performed at the school. In June 1941 Schrödinger was joined by Walter Heitler who took the position of assistant professor. Heitler gave a course of lectures designed to introduce students to quantum theory of the chemical bond. These lectures brought together staff and students of third-level establishments in the Dublin area, exposing them to twentieth century theoretical physics. Members of the mathematical community at the time seized the opportunity to hear the lectures of Schrödinger and Heitler and within a few years the material covered began to find its way onto undergraduate university courses.

One of the objectives de Valera had in mind when he founded the institute was to provide a meeting place for scholars from University College Dublin and Trinity College Dublin. For reasons both historical and religious, the academic contacts between the two institutions had previously been non-existent. The conjoining of the two institutions, which was formally proposed by Donogh O'Malley in the abortive Universities Mergers Act (1967) was strongly opposed by both universities and ultimately defeated.

In its early years the research of the school mainly focused on non-linear field theory, meson theory, general relativity and geometry. Mesons which Heitler began researching when he arrived in 1941 were at the time believed to be the fundamental particles of the strong interaction. In 1948 John Lighton Synge was appointed senior professor, whose research interests were general relativity and geometry. Later research involved numerical analysis due to the addition of Cornelius Lanczos to the faculty and the development of the computer.

The school has three senior professors at present: Werner Nahm, Tony Dorlas and Denjoe O'Connor. Nahm has worked on massive integrable field theories in the conformal limit and recently also on aspects of the quantum Hall effect in graphene. Dorlas has worked on a lattice model of a boson gas called the Bose–Hubbard model, on models of a spin glass and on Anderson localisation in quasi-one-dimensional systems, and also on quantum information theory. O' Connor has worked on noncommutative geometry and applications to quantum field theory, esp. as an alternative to lattice field theory, and on crossover phenomena and the renormalisation group.

In July 2009 the report of the Special Group on Public Service Numbers and Expenditure Programmes (also known as the McCarthy report) suggested, as part of a long list of proposals, that the Institute be amalgamated into either University College Dublin or Trinity College, Dublin. [1] The Report noted 79 staff members being paid €6.7m by the Exchequer, an average of nearly €85,000 per person p.a.