Mendrisio is a municipality in the district of Mendrisio in the canton of Ticino in Switzerland.

Mendrisio is the seat of the Accademia di Architettura of the university of Italian speaking Switzerland (USI).

Mendrisio is first mentioned in 793 as Mendrici.[3]

Some thirty graves, tombs and grave stones, as well as coins from the Roman Republic and Roman Empire and the remains of a villa near the Church of S. Maria indicate that this area was settled throughout the Roman era. Powerful Langobard families made Mendrisio into a regional power, at the expense of the old power center, Balerna. By 1140 Mendrisio was an independent municipality in the county of Seprio. It was ruled by city of Como from 1170 until 1335. Following the victory of Milan over Como, it was ruled by the Milanese Visconti. The Visconti ruled until 1402, when a victory by Como brought Mendrisio back under that city. In the 15th Century, it became a fief held by the Rusca and Sanseverino families.[3]

During the Middle Ages a number of secular buildings, including several massive towers, were built in the town between the Porta San Giovanni and the river Moree. On the hill on the other side of the river, the Torriani family built a castle, which was destroyed in the Late Middle Ages. Under the Swiss Confederation's rule, it became the capital of the bailiwick of Mendrisio. Starting in the 17th Century, the governor of the bailiwick took up residence in the Palazzo Rusca.[3]

The population of the town divided into three separate groups, the nobles or nobili, the burghers or borshesi and the newcomers or divisi. The divisi was a class of residents that did not have full citizenship rights in the town. They were made up of tenants, new residents and their decedents. While the divisi had rights and access to the commons, their rights were restricted.[4] The population of Mendrisio remained divided into three classed until the end of the old village cooperative (vicinia) in 1798.[3]

Well before 1000, the Church of Mendrisio formed a nearly independent church district, under the mother church of Balerna. In the 15th Century, it broke away completely from Balerna. In the town itself there were the two parishes, SS Cosma e Damiano and S. Sisinio. The present parish church of SS Cosma e Damiano was built in the classicist style in 1863-75, above the foundations of a baroque style church from 1672. The church of S. Sisino is in the district of La Torre. Other churches in the town include the churches of S. Martino and S. Nicolau. The Order of Humiliati ran the hospice of St. John and maintained a monastery in the district Ferrera, starting in 1268. The Servite Order moved in 1477 from La Torre to S. Giovanni. There, they set up a house to feed pilgrims. After 1644, they opened a boys' school in the S. Giovanni monastery. In 1852 the school became a cantonal gymnasium. In the 17th Century the Ursulines settled in Caslaccio and the Capuchins settled to the south of town. The monasteries of all these orders were secularized in the 19th Century.[3]

In modern times the town has grown over the Moree bridge and out around the country estates and farms. Along the river paper mills, mills and breweries were built. Then, in 1873 the Torriani-Bolzani spinning mill opened. By the end of the 19th Century it employed about 350 workers (mainly women and children). In the second half of the 19th Century, the population doubled within 60 years. The town grew toward the south with the magnificent villas and the Hospital Beata Vergine and north towards the Cantine. The local sharecropping agriculture collapsed during this time, but the construction of the railway led to the emergence of a second diversified industrial center along the railway line. After World War II the industrial zone expanded into the Prati di S. Martino.[3]

In the south of the town several important public buildings were built. In 1898 the Neuro-psychiatry Clinic opened, and in 1944, the market hall and new schools. In 1996, the Faculty of Architecture of the Università della Svizzera italiana opened. Between the train station and the old town, next to residential buildings, numerous service sector businesses opened. In 2000, these offered more than three-quarters of the jobs. That same year, more than half of the residents of Mendrisio were commuters away from town, while the commuters coming in represented two-thirds of the workforce in Mendrisio. Almost two-fifths of workers were cross-border commuters.[3]

Of the built up area, industrial buildings made up 2.8% of the total area while housing and buildings made up 10.2% and transportation infrastructure made up 7.7%. Out of the forested land, 24.9% of the total land area is heavily forested and 2.0% is covered with orchards or small clusters of trees. Of the agricultural land, 3.5% is used for growing crops, while 1.2% is used for orchards or vine crops and 10.2% is used for alpine pastures. All the water in the municipality is flowing water. Of the unproductive areas, and .[5]

The municipality is the capital of the Mendrisio district. It is located on the slopes of Monte Generoso. In 2004, it absorbed Salorino and in 2009, it added Arzo, Capolago, Genestrerio, Rancate und Tremona.

The blazon of the municipal coat of arms is Gules a cross argent.[6] 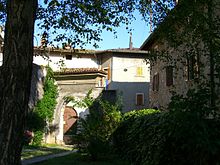 As of 2000[update] the average number of residents per living room was 0.58 which is about equal to the cantonal average of 0.6 per room. In this case, a room is defined as space of a housing unit of at least 4 m2 (43 sq ft) as normal bedrooms, dining rooms, living rooms, kitchens and habitable cellars and attics.[11] About 27.2% of the total households were owner occupied, or in other words did not pay rent (though they may have a mortgage or a rent-to-own agreement).[12]

The historical population is given in the following chart:[3][15] 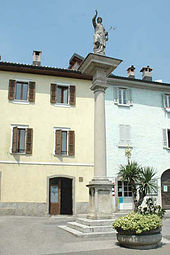 Mendrisio is home to a number of Swiss heritage sites of national significance. The list includes three churches; the Church of S. Sisinio alla Torre, the Church of S. Martino, and the complex of S. Giovanni, which includes a convent, the Church of S. Giovanni and the Oratory of S. Maria. There are six stately houses or palaces on the list; the Croci House, the Dei Pagani Tre Buchi House, Palazzo Pollini, Palazzo Torriani, Villa Argentina and the Villa and mosaics of S. Maria in Borgo. The rest of the list consists of the Pinacoteca cantonale Giovanni Züst or Giovanni Züst Art Galley and the Tremona archeological site.[16]

Mendrisio is known in Italian as il magnifico borgo (the magnificent town) due to its numerous elegant historical buildings. For two decades the town has had a pioneering role in promoting electric cars. The city's surroundings are the main wine-growing regions in Canton Ticino.

The city is also known for its typical Good Friday procession, when a live recreation of Christ's passion is enacted (without any blood or violence), and also for the grape festival (called Sagra dell uva) which takes place in late September.

Cycling's 2009 UCI Road World Championships was held in Mendrisio from 23–27 September 2009. Cadel Evans who himself lives in Mendrisio district with his family won the Gold medal of the men's event.

In Mendrisio about 65.6% of the population (between age 25-64) have completed either non-mandatory upper secondary education or additional higher education (either university or a Fachhochschule).[8]

In Mendrisio there were a total of 1,651 students (as of 2009[update]). The Ticino education system provides up to three years of non-mandatory kindergarten and in Mendrisio there were 278 children in kindergarten. The primary school program lasts for five years and includes both a standard school and a special school. In the municipality, 485 students attended the standard primary schools and 19 students attended the special school. In the lower secondary school system, students either attend a two year middle school followed by a two year pre-apprenticeship or they attend a four year program to prepare for higher education. There were 405 students in the two year middle school and 4 in their pre-apprenticeship, while 178 students were in the four year advanced program.

The upper secondary school includes several options, but at the end of the upper secondary program, a student will be prepared to enter a trade or to continue on to a university or college. In Ticino, vocational students may either attend school while working on their internship or apprenticeship (which takes three or four years) or may attend school followed by an internship or apprenticeship (which takes one year as a full-time student or one and a half to two years as a part-time student).[22] There were 105 vocational students who were attending school full-time and 157 who attend part-time.

As of 2000[update], there were 1,096 students in Mendrisio who came from another municipality, while 155 residents attended schools outside the municipality.[20]