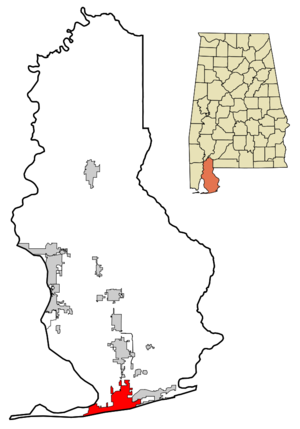 mapsize = 250px
map_caption = Location in Baldwin County and the state of

Gulf Shores is a coastal city in Baldwin County, , . As of the 2000 Census, the population was 5,044. However, since the year 2000, Baldwin County, Alabama as a whole, has experienced the fastest rate of population growth in the state, second only to .

Gulf Shores is one of two (Orange Beach being the other one) in the state of . Most of the city is therefore devoted to beachfront hotels, condominiums, vacation houses and a tourism/real estate based economy. Because the nearby is protected by , Gulf Shores is one of only two resort cities with a large beach, fronting the between and the well-known resorts of . Gulf Shores is therefore more popular with populations in , , and than the Florida resorts, which tend to be dominated by visitors from other regions of the . The adjacent resort city of Orange Beach offers direct access to the Gulf of Mexico for vessels, via . The greater area is home to a very large charter fishing fleet. Gulf Shores is served by , which is located on the north side of town on Highway 59. To view area info visit: [http://www.gulfcoastfrbo.com/SitePages/BeachGuide.htm Gulf Coast Beach Guide] .

The extensive destinations of Panama City Beach and Destin, Florida on the east side and the casinos of Gulfport and Biloxi to the west give Gulf Shores plenty of competition. During the winter months, Gulf Shores and Orange Beach both host a sizable population of "Snowbirds" primarily from the upper midwestern states. Gulf Shores and Orange Beach bore the brunt of on , . Since Ivan, the beach has been restored and is kept in excellent condition with plenty of sand between the beachfront resorts and the surf. The entire Gulf Shores/Orange Beach area has been designated a "Go Zone" as a result of hurricane Ivan spurring unprecedented development with newly minted, towering structures now bristling along the beachfront as of early 2007. This building boom continues. An average yet well appointed beachfront condominium with two bedrooms and two baths can cost from $250,000 to $2,000,000 dollars depending on square footage and other factors.

Unincorporated Ft. Morgan, the City of Gulf Shores and the City of Orange Beach are contiguous from west to east respectively. The Intracoastal Waterway forms a canal starting at Mobile Bay to the west, and cuts through to the east, into Wolf Bay, forming an island. The combined stretch of beach from Ft. Morgan to is roughly 30 miles in length and begins at the tip of Ft. Morgan, on the west end of the island. It then continues through the City of Gulf Shores, the City of Orange Beach, terminating at . From there, a bridge connects Orange Beach to , Alabama which continues to the Florida state line. The Alabama Gulf Coast beach is renowned for its bright, "sugar white" sand. This is because the grains of sand that make up the beach are composed of quartz. This although quite abrasive to CDs, sunglasses etc., is also very powdery, soft and comfortable to the feet. The warm waters along the beachfront tend to have an emerald green tint due to the close proximity of the estuarial system to the west, where the Mobile river delta meets the Gulf of Mexico. The prevailing west to east current along the beach brings suspended silt from the Mobile river delta toward the Florida panhandle thus giving the water its green tint. Gulf Shores is known for an abundance of gulf coast seafood dining, excellent , and recent baseball standout D.J. Jones whom now plays professional baseball in the Tampa Bay Rays organization.

There were 2,344 households out of which 20.7% had children under the age of 18 living with them, 56.2% were married couples living together, 7.0% had a female householder with no husband present, and 34.1% were non-families. 26.7% of all households were made up of individuals and 10.0% had someone living alone who was 65 years of age or older. The average household size was 2.15 and the average family size was 2.56.

Gulf Shores is a part of the system.

Gulf Shores enjoys a very mild throughout the year. High temperatures in the winter average around 65 degrees; summer-time high temperatures average above 90 degrees. Gulf Shores also averages 61 inches of rainfall per year. The temperature however, can dip significantly at times, during the months of December, January, and February, occasionally as low as the lower 40s.

The location of Gulf Shores on the northern coast of the makes it especially vulnerable to s. In September 1979, Gulf Shores received the full brunt of which leveled most of the town. In September 2004, category 3 made landfall only a few miles from Gulf Shores, causing extensive wind and flooding damage. Gulf Shores has recovered substantially from the results of the storm. Nearby Orange Beach suffered even greater damage from its location east of Ivan's eyewall. Over 800 homes (mainly s) were destroyed by Ivan. Gulf Shores suffered an estimated 1.5 to 2 billion dollars in total damage from the hurricane. As a response to the damage from , Gulf Shores, AL adopted the 2003 edition of the in the immediate aftermath of the storm. These codes mandated a higher standard of construction, including the protection of glass openings using impact resistant glazing or . Newly minted structures now bristle along the beach and throughout the area with a huge development boom currently underway. This boom has slowed substantially due to the general 2006 and 2007 housing market downturn and escalating insurance rates resulting from and .

* Gulf Shores has a shallow lagoon known as "Little Lagoon" that is located just north of the western beach.
* Legend has it that "Perdido Key" or "Lost Key" got its name from Spanish pirates who moored their vessels in "Pirate's Cove" while waiting to intercept unsuspecting sailing ships in the northern Gulf of Mexico.
* Ft. Morgan while not officially within the city limits of Gulf Shores, is nonetheless considered an important part of the greater area with the fort itself having great historical significance.
* Along Ft. Morgan Road there is a federally protected wildlife reserve known as the "Bon Secour Wildlife Reserve." It is a pristine, popular place for "birding."