Deviled eggs or eggs mimosa are hard-boiled eggs cut in half and filled with the hard-boiled egg's yolk mixed usually with mayonnaise and mustard. Deviled eggs are usually served cold. They are served as a side dish, appetizer or a main course, and are a common holiday or party food.

The deviled egg originated in ancient Rome according to the show The Secret Life Of.... It is still popular across the continent of Europe. In France it is called œuf mimosa; in Hungary, töltött tojás or kaszinó tojás; in Romania, ouă umplute, in the Netherlands gevuld ei ("stuffed egg"). In Belgium, the Netherlands and Germany sometimes a variation is served known as "Russian eggs", where the eggs are filled with caviar and served in rémoulade sauce. The title "Russian eggs" comes from the presence of the caviar. Deviled eggs are a common dish in the United States. In the Midwestern and Southern U.S., they are commonly served as hors d'oeuvres before a full meal is served, often during the summer months. Deviled eggs are so popular in the United States that special carrying trays are sold for them. Prepared and packaged deviled eggs are now available in some U.S. supermarkets. 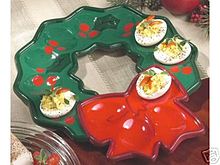 Cool hard-boiled eggs are peeled, sliced lengthwise and the yolks are removed. The yolks are mashed and mixed with a variety of other ingredients, most often mayonnaise and mustard.[1] Tartar sauce or Worcestershire sauce are also frequently used. Other common flavorings include: diced pickle or pickle relish, salt, ground black pepper, powdered cayenne pepper or chipotle chilis, vinegar, green olives, pimentos, poppyseed, thyme, cilantro, and minced onion. The yolk mixture is then scooped with a spoon or knife or piped into each egg "cup". Paprika may be sprinkled on top as a garnish.[2]

In French cuisine, the other ingredients are most likely to be pepper and parsley. In the Hungarian cuisine the yolks are mashed and mixed with white bread soaked in milk, mustard and parsley, often served as an appetizer in mayonnaise or as a main course baked in the oven with Hungarian sour cream topping and served with French fries. Other common flavorings of the yolks in the German cuisine are anchovy and caper. 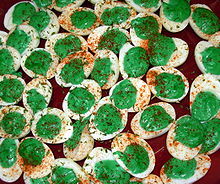 The term "deviled" dates back to the 19th century, referring to the use of particularly hot spices in cooking. Contemporary versions of deviled eggs tend to include a wider range of seasonings and added foods, such as garlic, horseradish, wasabi, cheese, chutney, capers, salsa, hot sauce, ham, mushrooms, spinach, sour cream, caviar, smoked salmon or other seafood, and sardines and may not therefore always be spicy.

The term "deviled", in reference to food, was in use in the 18th century, with the first known print reference appearing in 1786.[3] In the 19th century, it came to be used most often with spicy or zesty food, including eggs prepared with mustard, pepper or other ingredients stuffed in the yolk cavity.

In some parts of the Southern and Midwestern United States, the terms "salad eggs" or "dressed eggs" are used, particularly when the dish is served in connection with a church function - presumably to avoid dignifying the word "deviled".