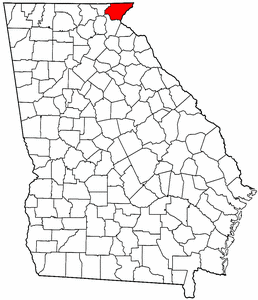 With an average annual rainfall of over convert|70|in|mm, Rabun County has the title of the rainiest county in Georgia and one of the rainiest counties east of the . [ [http://www.ncdc.noaa.gov/img/documentlibrary/clim81supp3/precipnormal_hires.jpgNOAA Mean Annual Precipitation 1961-1990] ]

As early as 1760, explorers came to the area now known as Rabun County. In the 1700s, the population of Cherokee in the area was so heavy in the area that this portion of the were sometimes called the "Cherokee Mountains." The early explorers and divided the Cherokee people into three divisions depending on location and dialect, the Lower, Middle, and Over-the-Hill. There were at least four Cherokee settlements in what would later become Rabun County. A Middle settlement called Stikayi ("Stiyaki, Sticoa, Stekoa") was located on Stekoa Creek, probably southeast of the present-day Clayton. An Over-the-Hill settlement called Tallulah was located on the upper portion of the . There were also two Cherokee settlements of unknown division, Chicherohe (Chechero), which was destroyed during the , located along Warwoman Creek, east of Clayton, and Eastertoy ("Eastatowth, Estatowee") which was located near the present-day Dillard.

Despite the prominence of the Cherokee, there is evidence that other Native Americans were in the region before them. A mound similar to others across North Georgia (including the famous ) is located about one mile (1.6 km) east of Dillard, Georgia and is likely a remnant of an earlier mound-building Native American culture known as the . [ [http://roadsidegeorgia.com/county/rabun.html Roadside Georgia's Archives of Rabun County] ] The mound location is listed on the as the .

Explorer and naturalist was one of the early visitors to Rabun County. According to his journal entries for May, 1775, Bartram crossed the into Georgia near its with Warwoman Creek. He later went through a junction of Cherokee trails called Dividings (which would later become Clayton), and then traveled north to an area called Passover (which would later became Mountain City). During his visit to the area, he also climbed . His travels in Rabun County are memorialized today by the Georgia portion of the hiking trail known as the .

and his family were among the first documented in the area in 1794 as a result of a land grant for his service in the American Revolution. The settlers were initially tolerated, but tensions increased as displaced Cherokees moved in from other areas. Eventually, the white settlers were viewed as invaders who did not respect nature and killed the game and, as a result, raids between the clashing cultures became commonplace. For the most part, the hostilities ended a few years before the Cherokee ceded the land to Georgia in 1817.

The passed an act to create the county in , becoming Georgia’s forty-seventh county. The northern border of the county was established as 35°N, which is the boundary between Georgia and . The county is named for , who served as the 11th of Georgia from his election in 1817 until his death in 1819. In 1828, the Georgia General Assembly transferred a portion of Habersham County to Rabun County. In 1838, the legislature redefined the Rabun-Habersham county line. In 1856, the legislature used portions of Rabun and Union Counties to create Towns County. [ [http://www.cviog.uga.edu/Projects/gainfo/countypop/rabunpop.htm Rabun County Historical Population Profile] ]

During the Civil War, Rabun County was one of only five Georgia counties that did not from the Union. [ [http://www.gmrdc.org/docs/planning/rabun_county_plan/Chapter%207%20-%20Historic%20Cultural.pdf Rabun County Comprehensive Plan - Chapter 7 - Historical Cultural] ] Although the county was largely untouched by the Civil War, the area did border on anarchy during that time. Despite its failure to secede from the Union, Rabun County did field two regiments for the Confederate cause: Rabun 24th Regiment, Georgia Infantry, Company E, Rabun Gap Riflemen; and Rabun 52nd Regiment, Georgia Infantry, Company F, Beauregard Braves.

In 1898, the on a north/south track through the county. One of the most popular stops along the railway was Tallulah Gorge. The Railway was in operation for more than 60 years and was featured in the , "The Great Locomotive Chase.

Starting in the 1920s, many of the improvements in the county can be attributed to the establishment, growth and expansion of the in the county. One of the key figures in the establishment and growth of the Chattahoochee National Forest was "Ranger Nick" Nicholson, Georgia's first . Among other things, Ranger Nick was responsible for arranging for telephone lines to be run from Clayton, Georgia to the Pine Mountain community in the eastern part of the county.

The county is governed by a five member Board of Commissioners.

The runs through the county, roughly from southwest to northeast also representing a portion of the . The county's eastern border with is formed by the , the largest of the and then (which forms the rest of the border of the two states). The other half is in the watershed of the , which flows northward from Clayton. The high along the divide gives Rabun County the most of any in county in Georgia. This also gives it mild weather throughout the warmer months of the year, leading to the county's slogan, "Where Spring Spends the Summer".

Rabun County has a number of picturesque waterfalls, many of which are easily reached by relatively short trails. Among the favorites of visitors to the county are , and Minnehaha Falls.

and run together, following a north-south route through the county, and runs east-west. Georgia 246 begins at Dillard and connects to Sky Valley. Georgia 28 runs for an extremely short distance in the northeastern tip, between the .

Rabun County is home to several endangered and as reported by the US Fish & Wildlife Service [ [http://www.fws.gov/athens/endangered/counties/rabun_county.html US Fish & Wildlife Service Listed Species in Rabun County as of May, 2004] ] and the Georgia Department of Natural Resources. [ [http://georgiawildlife.dnr.state.ga.us/content/specieslocationbycounty.asp?lstCounty=Rabun Georgia Department of Natural Resources List of Georgia Rare Species in Rabun County] ]

There are 15 plants that are protected in Rabun County, including two that are on the Federal endangered species list: ("Trillium persistens"), ("Gymnoderma lineare") and ("Helonias bullata").

Rabun County, Georgia, is one of the battlegrounds where humans fight the alien invaders in 's series of books.