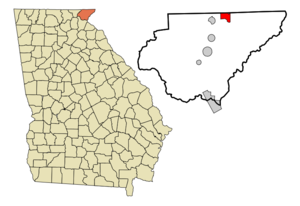 It is home to , which offers ing in the . The resort used to have the only in Georgia, but after changing ownership in 2004, the ski portion of the resort was closed permanently [http://www.slopequest.com/slopes/GA/Sky%20Valley%20Resort.html] . The only or other through-road is the Dillard/Highlands Road (Georgia State Route 246 and N.C. Highway 106) between and . The northern city limit is the state line, where the highway s crossing in five different places (two of which are into and out of the city).

There were 112 households out of which 11.6% had children under the age of 18 living with them, 67.9% were married couples living together, 4.5% had a female householder with no husband present, and 26.8% were non-families. 25.0% of all households were made up of individuals and 16.1% had someone living alone who was 65 years of age or older. The average household size was 1.97 and the average family size was 2.30.