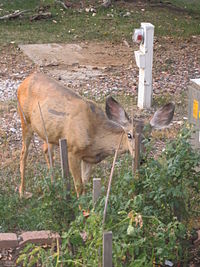 Nuisance wildlife management is the term given to the process of selective removal of problem individuals or populations of certain species of wildlife. Other terms for the field, include "Wildlife Damage Management (coined by Dr. Scott Hygnstrom of University of Nebraska-Lincoln), "Wildlife Control", and "Animal Damage Control" to name a few. Some species of wildlife may become habituated to man's presence causing property damage or risk transfer of disease to humans or pets (zoonosis). Many wildlife species coexist with humans very successfully. In fact, commensal rodents have become more or less dependent on people. 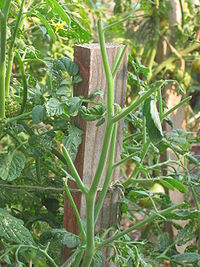 Typically, species that are most likely to be considered a nuisance by humans have the following characteristics. First, they are adaptable to fragmented habitat. Animals such as Canada geese (Branta canadensis) love ponds with low sloping banks leading to lush green grass. Unsurprisingly, humans love this sort of landscaping too. Thus it is perfectly understandable that Canada geese have thrived (not to mention the decline in hunting). Second, these animals are not tied to eating a specific type of food. For example, lynx do not thrive in human impacted environments because they rely so heavily on snowshoe hares. In contrast, raccoons have been incredibly successful in urban landscapes because they can live in attics, chimneys, and even sewers and can sustain themselves with food gained from trashcans. Third, successful animals must not pose a significant risk to human health and safety. Animals perceived as grave threats will incur the incredible ire of humans and be under constant threat of humans seeking their demise. Finally, successful animals in humanized landscapes are often perceived as cute, at least until they become so numerous that their preferential status becomes diminished. pressure. Many wildlife species have the potential of becoming a nuisance. Species Whether or not a species becomes a pest can be directly correlated to the degree at which that animal can be tolerated by humans. For many people, squirrels feeding in their yards or gardens is not a problem; while at the same time, a neighbor may feel the squirrels are a complete nuisance. 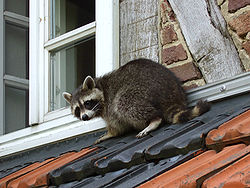 Raccoon on a roof.

Common wildlife pests include squirrels, opossums, raccoons, bats, voles, deers, mice, coyotes, bears, ravens, seagulls, woodpeckers and pigeons. Some of these species are protected by state or federal regulations, such as bears, ravens, bats, deer, woodpeckers, and coyotes, and a permit may be required to control some species.

Wildlife species are usually only pests in certain situations, such as when their numbers become excessive in a particular area. Human change in the environment will often result in increased numbers of a species. For example, piles of scrap building material make excellent sites for rodents to frequent. Food left out for household pets is often equally attractive to some wildlife species. In these situations, the wildlife have suitable food and habitat and will usually become a nuisance.

The primary objective of any control program should be to reduce damage in a practical, humane and environmentally acceptable manner. Wildlife managers and wildlife control operators (WCOs) base control methods on the habits and biology of the animals causing damage, in order that their efforts will be more effective and will serve to maximize safety to the environment, humans and other animals.

A key to controlling wildlife damage is prompt and accurate determination of which animal is causing the damage. Even someone with no training or experience can often identify the pest by thoroughly examining the damaged area. Because feeding indications of many wildlife species are similar, other signs – such as droppings, tracks, burrows, nests or food caches – are usually needed to make a positive species identification.

After you properly identify the wildlife pest, you can choose control methods appropriate to the animal species involved. Improper control methods may harm but not kill the animal, causing it to become leery of those and other methods in the future. For example, using traps and poison baits improperly or in the wrong situation may teach the animal that the control method is harmful. This may make the animal difficult to control later, even with the correct method.

The most commonly used methods for controlling nuisance wildlife around homes and gardens include exclusion, habitat modification, repellents, toxic baits, glue boards, traps and frightening. Wildlife control involves human risks both through injury to person and property but also through disease.

Physically excluding an offending animal from the area being damaged or disturbed is the best and most permanent way to control the problem. Depending upon size of the area to be excluded, this control method can range from inexpensive to prohibitively costly. For example, damage by birds or rabbits to ornamental shrubs or garden plants can be reduced fairly inexpensively by simply placing netting over the plant(s) to keep the pests away. On the other hand, fencing out deer from a lawn or garden can be costly. Additionally, exclusion can interfere with the natural movement of wildlife particularly when exclusion in done on large acreages. Materials needed for exclusion will depend upon the species causing the problem. Large mammals can be excluded with woven wire fences, electric fences and poly-tape fences. Check local laws as many communities still forbid the use of electric fencing in their jurisdiction. Small mammals and some birds can be excluded with netting, tarp, hardware cloth or any other suitable material. Before ordering netting, be sure to know the species of the smallest animal you seek to exclude as nets come in different weave sizes.

Modifying an animal’s habitat often provides lasting and cost-effective relief from damage caused by nuisance wildlife. Habitat modification is effective because it limits access to one or more of the requirements for life – food, water or shelter. Rodent- or bat-proofing buildings by sealing cracks and holes prevents these animals from gaining access to suitable habitats. Storing seed and pet food in tightly closed containers, controlling weeds and garden debris around homes and buildings, and storing firewood and building supplies on racks or pallets above ground level are also practices that can limit or remove the animals’ sources of food, water or shelter. However, habitat modification, while limiting nuisance wildlife, may also limit desirable species such as songbirds as well.

Using a method such as a repellent that changes the behavior of an animal may lead to a reduction or elimination of damage. Several available repellents, such as objectionable-tasting coatings or odor repellents, may deter wildlife from feeding on plants. Other repellents such as sticky, tacky substances placed on or near windows, trees or buildings may deter many birds and small mammals. Unfortunately, most wildlife soon discover that repellents are not actually harmful, and the animals may soon become accustomed to the smell, taste or feel of these deterrents. Repellents applied outdoors will have to be reapplied due to rain or heavy dew or applied often to new plant growth to be effective. Whenever using repellents, be sure to carefully read the directions. Failure to follow the directions can diminish the effectiveness of the repellent. However, even under the best of conditions, repellents frequently fail to live up to customer satisfaction. The reason for this is twofold. First, many repellents simply don't work. For example, peer-reviewed publications have consistently shown that ultrasonic devices do not drive unwanted animals away.[citation needed] Second, even when the repellent has been shown to work, animals in dire need of food will "hold their nose" and eat anyway because the alternative is essentially death by starvation. Repellents are most successful (assuming we are referring to products actually demonstrated by peer-reviewed research to be effective) when animals have access to non-treated food.

Glue boards and traps can be either a lethal or non-lethal method of control. Glue boards can be used to trap small mammals and snakes. Applying vegetable oil to the caught animal will dissolve the glue allowing for release of the animal.

However, as many animals caught in glue traps will die from stress, shock, dehydration, starvation or inflict severe injuries upon themselves - to the extent of severed limbs and torn skin - releasing is considered an act of compassionate rescue and not a design feature of this type of trap, indeed many animal welfare groups worldwide are pushing for a ban on the sale and use of glue traps.

Using traps can be very effective in reducing actual population numbers of certain species. However, many species cannot be trapped without a permit. In most cases, homeowners may trap an offending animal within 100 yards of their residence without a permit.

Traditional live traps such as cage or box traps are easily purchased at most garden centers. These traps allow for safe release of the trapped animal. State law may prohibit the release of the animal to another area. Check with the local Department of Fish and Game for regulations. Leghold traps allow for either release or euthanasia of the trapped animal. Traps such as body-gripping traps, scissor and harpoon traps, as well as rat/mice snap traps, are nearly always lethal. Knowledge of trapping techniques is essential for a successful trapping program.

Frightening devices such as bells, whistles, horns, clappers, sonic emitters, audio tapes and other sound devices may be quite successful in the short term in repelling an animal from an area. Other objects such as effigies, lights, reflectors and windmills rely on visual stimulation to scare a problem animal away. Often nuisance animals become accustomed to these tactics and will return later if exposed to these devices daily.

Before initiating any wildlife control activities, you must become familiar with federal, state, and local laws. The easiest way to learn these guidelines is to contact your state's wildlife agency. This will be the same agency responsible for selling hunting and fishing licenses. In general, however, you will be permitted to prevent wildlife damage through exclusion and habitat modification, provided that you are not harming an occupied nest or den and are not directly harming an animal.

There are many ethical considerations in nuisance wildlife management. Many regulations exist in the United States concerning animal trapping including trap check intervals, usually requiring all traps be checked at least once during a 24 hour period. Some governments permit relocation of wildlife, however humane considerations must be taken into account before relocating wildlife, including population and habitat. Some species of wildlife cannot be ethically relocated due to overabundance of competing species or lack of availability of proper food and habitat. Control during the spring months does run the risk of killing the young by starvation. Proper euthanasia of animals when necessary is also a controversial and sensitive consideration to be taken prior to engaging in nuisance wildlife management and requires training and certification in some areas of the United States.