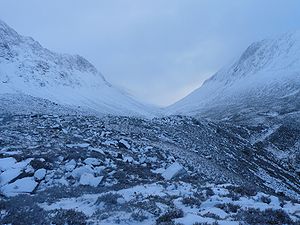 The northern entrance to the Lairig Ghru, with Lurcher's Crag (left) and Braeriach (right)

The Lairig Ghru (Scottish Gaelic: Làirig Dhrù) is one of the mountain passes through the Cairngorms of Scotland.

In Watson (1975) the author plausibly explains the derivation of Lairig Ghru as a place-name. He gives Lairig Dhru with the local pronunciation of Laarig Groo and the meaning pass of Dhru or Druie suggesting the ‘probable’ derivation from Drudhadh meaning oozing. Any visitor to the summit of the Lairig Ghru would accept that as a possible derivation because two watercourses - one on each side of the summit - actually appear to ooze from the valley floor.

However - in Gordon (1948) the author is much less certain about the derivation of the place-name - writing:

As a place-name Lairig Ghru remains an enigma. Lairig means hill pass, and map-makers of the nineteenth century solved the problem to their own satisfaction by substituting for Ghru the word Ghruamach, for which they had apparently not the slightest authority. Ghruamach means forbidding or surly, and forbidding the Lairig often is in wild weather ... But authorities on place-names reject these suggestions, and are obliged to leave the name Ghru a mystery, although it seems to contain the same root as the Allt Dhru burn which drains it to the north. MacBain a distinguished philologist, writes that the name is “probably the Pass of Druie river, from root dru, flow, as in Gaulish Druentia”
—Gordon (1948) (p308)

The weight of suggestion is - therefore - that Lairig Ghru is certainly the hill pass (of something) and that something is probably related to the water flowing from the floor of the valley close to the summit[1].

Many gaelic place names have lost their original spelling and meaning through translation into English. The prolific and late Dundonian mountaineer, Syd Scroggie felt that the name Lairig Ghru was such a case and suggested in his book, "The Cairngorms Unseen" that the Lairig Ghru, was actually in fact the Lairig Ruadh (Red Pass). This fits with the original name of the mountain range Am Monadh Ruadh, (The Red Mountains).

Historically the Lairig Ghru has been used simply as a route between Deeside and Strathspey by anyone needing to make that journey. It is often referred to as a Drove Road, and while it's not wrong to do so, it is arguably an overemphasisation of one specific use to do so. The Lairig Ghru has been a route used by many different people, for many different purposes as made clear in Haldane (1952), and was in regular use long before the height of the droving trade in the more peaceful times after the middle of the 18th century:

The natural barrier of hills which stand round the head waters of the two rivers [the Dee and Don] was thus less of a protection than a source of danger, and it was over paths trodden by centuries of raiding traffic that, when more peaceful times came, the drovers of north-east Scotland passed on their way to the trysts and their lawful occasions
—Haldane (1952) (p115)

The Lairig Ghru was used as a droving-route as late as 1873 - Haldane (1952) - to Braemar and farther south. Until approximately the 1870's men from Rothiemurchus annually, in the spring, cleared the track of rocks that had fallen on to it during the winter.

Modern road traffic now travels over the Drumochter Pass via the A9 or The Lecht on the A939, and the Lairig Ghru is left to walkers.

The full route from Aviemore to Braemar is about 43 km, though many walkers cut the walk short by starting or finishing at Linn of Dee, the 8 km from there to Braemar being along a tarmaced road.

Although the Lairig Ghru has long been used by ‘travellers‘ to get between Strathspey and Deeside, it has also been used recreationally since at least the early twentieth century Anderson (1911) writes:

In the days before railways it was much used as a means of intercommunication, particularly for the driving of cattle from all the Highlands around to the great southern “trysts” or fairs ; but now the pass is seldom traversed except by gillies and foresters, or by pedestrians ambitious to add the feat of “doing” it to their “record”.
—Anderson (1911)

An even earlier recreational mention CCJ 17, July 1901 is a report on the snow conditions in the Lairig Ghru by C. G. Cash in April of that year - he writes:

On the 17th I went up the Lairig Ghru [from Rothiemurchus] as far as the watershed. Here I reached snow at the 1750 [feet] contour, and found it much greater in quantity than I have previously seen it. After the first half-mile I found it unbroken, except for a narrow strip along the edge of the ridge usually occupied by the intermittent track. The snow was in capital walking condition, but seemingly I was the first person to go up the pass. At the watershed the depth of the snow must have been great, for a notable ridge of rocks crossing the pass just at the watershed was buried, and the large cairns in its neighbourhood were invisible. Indeed I barely found enough exposed rock to serve as a dry seat, while I took a rest, a lunch, and a look at the Deeside view
—C. G. Cash - CCJ 17, July 1901 (p 313-314)

This snow report by C. G. Cash implies a familiarity with the Lairig Ghru - both his own, and his readers.

Way Points (from the south) 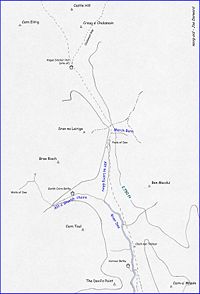 There are many way-points and features in the Lairig Ghru which, because of map-scale, do not appear on the old 1-inch, nor 1:50 000 scale maps. Others only exist in older-books Gordon (1925), Watson (1975) - for example - because the authors, acquainted with local-people and local-traditions, have described these features and recorded their names.

There is no objective measure of where the ends of the Lairig Ghru are. In Gordon (1948) the author defines Lairig as meaning a Hill Pass - in that case - the landscape is arguable too open for the ‘ends’ of the Lairig's track to extend much beyond the imaginary lines drawn between the summits of Carn a' Mhaim and The Devil's Point at the southern end - and Carn Eilrig and Castle Hill at the northern end.

From the south - the two main approaches to the Lairig Ghru follow the Glen Lui Route or the Glen Dee Route - these two routes come together soon after crossing the imaginary line between Carn a' Mhaim and The Devil's Point creating the first way-point. Soon after this coming together - the track splits again with the left-hand (roughly NW) branch leading to the Cairngorm Club footbridge across the River Dee towards Corrour Bothy and the mountains to the west of the Lairig Ghru.

Literally - stone of the tailors - Watson (1975) is a large ribbed stone by the side of the Lairig Ghru track close to where the Allt Coire an t-Saighdeir joins the River Dee.

In Gordon (1948) the author gives the story of how this stone got its name - writing:

...Tailor's Stone, named after certain tailors who for a wager attempted to dance, during the hours of a winter day, at the “three Dells” - the Dell of Abernethy, the Dell of Rothiemurchus and Dalmore in Mar. They danced at Abernethy and at Rothiemurchus and had crossed the most exposed miles of the Lairig when a blizzard overtook them in Glen Dee, and they succumbed as they vainly sought shelter behind the stone that is their memorial
—Gordon (1948) (page 316)

Although all the rain that falls on the slopes at either side of the Lairig Ghru eventually drains into the River Dee - and the ‘official’ source of the River Dee - the Wells of Dee - are high on Braeriach ; the River Dee - as a named watercourse on maps - starts at the confluence of Allt a' Gharbh choirie and Allt na Lairig Ghru near the head of Glen Dee. At this point - the main valley turns roughly west towards An Garbh Choire, and the Lairig Ghru track continues northward into the hanging valley as shown in the photograph in the gallery.

Only shown on the 1:25 000 scale maps - The Duke's Path is a made-path on the western side of the Lairig Ghru following the course of the burn draining Coire Ruadh, and leading to the bealach between Braeriach and Sron na Lairige.

During the nineteenth century - what was then Mar Estate was a private hunting estate owned by the Duke of Fife (created Duke in 1889, and dying in 1912). In Gordon (1925) the author describes using this path on an ascent of Braeriach - continuing:

It is (1925) some thirty years since the late Duke of Fife constructed it, but as the corrie is one of the most outlying of all in the wide Forest of Mar the path has scarcely been used since the day it was made and is now difficult to follow, except near the top of the corrie
—Gordon (1925) (p 108)

A series of pools on the Mar side of the summit that the Lairig Ghru track winds around - thought by many (incorrectly) to be the source of the River Dee - understandable when in Watson (1975) the author explains that The Pools of Dee are an invention rather than a pure Anglicisation of the old name of Lochan Dubh na Lairige - black tarn of the Lairig.

The March Burn is a burn on the Mar side of the summit of the Lairig Ghru draining the eastern-slope above it and disappearing below the rocks before it reaches the floor of the valley. In Gordon (1925) the author describes it as falling in a white spray to the Lairig from the northern spur of Ben Mac Dhui.

This use of March has nothing to do with the month of the year, but refers to the old use of the word meaning boundary. The summit of the Lairig Ghru marks the boundary between Deeside (Aberdeenshire) and Strathspey (Inverness-shire). In Watson (1975) the author gives the old name of Allt na Criche - the burn of the boundary giving the local pronunciation as Creech. 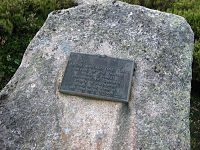 Plaque now attached to a rock marking the site of the Sinclair Memorial Hut.

A Mountain Refuge built in 1957 as a memorial to Angus Sinclair who died on Cairn Gorm on December 21, 1954. Like many other man-made shelters in the mountains of Scotland that were very accessible from public roads, it was demolished and removed in about 1991.

The refuge was located near the cross-roads where the tracks from Sron na Lairige and the Chalamain Gap cross the Lairig Ghru.

View of The Chalamain Gap.

A boulder strewn ravine used as a route between the Lairig Ghru and Glen More.

Evidently the name Chalamain Gap has been applied relatively recently to this ravine, since in Alexander (1928) the author does not name the gap, but describes it - writing:

a fine example of the “dry dens” or ravines which are found at various points on the Cairngorms, and which are supposed to have formed by glacier overflows or side streams
—Alexander (1928) (p 121)

In Watson (1975) the author does not name the ravine Chalamain Gap either, but referring to it in the context of the location of the Sinclair Hut - writes:

an alternative path to this spot comes in on the left [north-east] from Glen More. It leads through a rocky gap SE of Creag a' Chalamain, named Eag Coire a' Chomhlaich
—Watson (1975) (p129)

More recently - Diack (2006) gives the name as Eag Coire na Comhdhalack - The Ravine of the Corrie of the Assembly.