In organic chemistry, Möbius aromaticity is a special type of aromaticity believed to exist in a number of organic molecules. In terms of MO theory these compounds have in common a monocyclic array of molecular orbitals in which there is an odd number of out-of-phase overlaps which reveals the opposite pattern of aromatic character to Hückel systems. The spatial configuration of the orbitals is reminiscent of a Möbius strip, hence the name. The smallest member of this class of compounds would be trans-benzene. Möbius Systems were considered in 1964 by Edgar Heilbronner by application of the Hückel method [1] but the first practical compound was synthesized in 2003 by the group of Rainer Herges.[2]

The compound (6 in the image below) was synthesized in several photochemical cycloaddition reactions from tetradehydrodianthracene 1 and the ladderane syn-tricyclooctadiene 2 as a substitute for cyclooctatetraene.[3]

Intermediate 5 was a mixture of 2 isomers and the final product 6 a mixture of 5 isomers with different cis and trans configurations. One of them was found to have a C2 molecular symmetry corresponding to a Möbius aromatic and another Hückel isomer was found with Cs symmetry. Despite having 16 electrons in its pi system (making it a 4n antiaromatic compound) the Heilbronner prediction was borne out because according to Herges the Möbius compound was found to have aromatic properties. With bond lengths deduced from X-ray crystallography a HOMA value was obtained of 0.50 (for the polyene part alone) and 0.35 for the whole compound which qualifies it as a moderate aromat.

It was pointed out by Henry Rzepa that the conversion of intermediate 5 to 6 can proceed by either a Hückel or a Möbius transition state.[4]

The difference was demonstrated in a hypothetical pericyclic ring opening reaction to cyclododecahexaene. The Hückel TS (left) involves 6 electrons (arrow pushing in red) with Cs molecular symmetry conserved throughout the reaction. The ring opening is disrotatory and suprafacial and both bond length alternation and NICS values indicate that the 6 membered ring is aromatic. The Möbius TS with 8 electrons on the other hand has lower computed activation energy and is characterized by C2 symmetry, a conrotatory and antarafacial ring opening and 8-membered ring aromaticity.

Another interesting system is the cyclononatetraenyl cation explored for over 30 years by Paul v. R. Schleyer et al. This reactive intermediate is implied in the solvolysis of the bicyclic chloride 9-deutero-9'-chlorobicyclo[6.1.0]-nonatriene 1 to the indene dihydroindenol 4.[5][6] The starting chloride is deuterated in only one position but in the final product deuterium is distributed at every available position. This observation is explained by invoking a twisted 8-electron cyclononatetraenyl cation 2 for which a NICS value of -13.4 (outsmarting benzene) is calculated.[7] 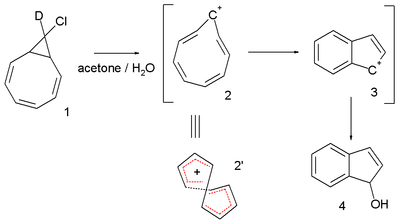 In 2005 the same v. R. Schleyer [8] questioned the 2003 Herges claim: he analyzed the same crystallographic data and concluded that there was indeed a large degree of bond length alternation resulting in a HOMA value of -0.02, a computed NICS value of -3.4 ppm also did not point towards aromaticity and (also inferred from a computer model) steric strain would prevent effective pi-orbital overlap.

A Hückel-Möbius aromaticity switch (2007) has been described based on a 28 pi-electron porphyrin system [9][10]:

The phenylene rings in this molecule are free to rotate forming a set of conformers: one with a Möbius half-twist and another with a Hückel double-twist (a figure-eight configuration) of roughly equal energy.