Maharishi School of the Age of Enlightenment

Maharishi School of the Age of Enlightenment (MSAE or Maharishi School) is an independent, non-denominational,[2] college preparatory school located in Fairfield, Iowa, USA.The school was founded in 1974, received state accreditation in 1986 and began single-gender classes in 1989. It is located on a 10 acre campus within the main campus of the Maharishi University of Management.

The school has an open admissions policy and its curriculum includes the practice of the Transcendental Meditation technique.[2][3][4] Its curriculum includes traditional academic subjects as well as the Science of Creative Intelligence. The school and its students have received numerous awards in state, national and international competitions for science, the arts, creativity and athletics. 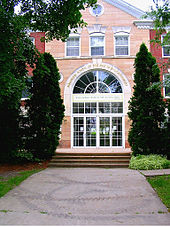 Entrance to the Maharishi School of the Age of Enlightenment

Maharishi School of the Age of Enlightenment is one of seven college preparatory schools in the state of Iowa[5] and began in 1974 as an elementary school with 12 students. It provided education to the children of the faculty of Maharishi International University (renamed Maharishi University of Management). Enrollment was then opened to children from the community and in 1981, the Upper School was formed.

In 1996, after eight years of single-gender classes, MSAE and two Iowa school districts were advised to “discontinue gender-segregated classes”.[7] MSAE school officials rejected the state Department of Education’s order. The issue came under the review of the Iowa Attorney General who sent a letter warning MSAE of a violation of Title IX and of state civil rights laws. Despite possible loss of public accreditation and state tax money for textbooks and local services, the school decided to continue single-gender classes the following school year.[8][9] The school's website indicates that they are maintaining their single-gender classroom format and accreditation by the Iowa State Board of Education.[10][11]

The school received a visit from talk show host Oprah Winfrey in October 2011.[12]

Ashley Deans is the Executive Director, Bevan Morris is Chairman of the Board of Trustees[13] and Richard Beall is Head of School.[14]

The Maharishi School campus consists of 10 acres (40,000 m2) located on the main campus of Maharishi University of Management (MUM).[6][15]

The Maharishi School's buildings are constructed according to the design principles of Maharishi Sthapatya Veda architecture. The main, three-story building, houses the Lower School and the Girls School. There are two school libraries, three computer labs, three art rooms, a digital and a conventional photography lab, and two music rooms. There is also an auditorium for performances and community gatherings. There is also a large courtyard in the center of the campus with the Boys School and Foster Hall located on the north side.[15]

The school has a large greenhouse, on the west side, which serves as a living classroom for four-season, organic gardening methods and environmental science.[15]The school's facilities are geared towards sustainability and include a rainwater catchment system, a solar-powered water system for the greenhouse; edible landscaping and recycling and composting programs.In 2004, the greenhouse won the Organic Silver Award from the Rodale Institute for their permaculture style of gardening.[16]

Maharishi School has access to recreation facilities at MUM including a climbing wall, indoor track, cardio and weight training, tennis courts and a swimming pool. It also has a field house for state-wide, inter-school, sporting events.[15] 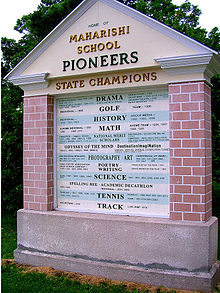 Maharishi School has an open admissions policy and any child who has at least one of their parents practicing the Transcendental Meditation technique may enroll.[3] Standardized test scores or Grade Point Average (GPA) are not a factor in admission. Financial aid is offered to families with demonstrated need.[17]

Students also study the curriculum known as the Science of Creative Intelligence (SCI), which is said to be the study of universal principles of natural law governing the universe. The principles of SCI are integrated into all academic course content. The school describes its curriculum and educational philosophy as “consciousness-based education”.[19]

MSAE students have won a number of awards in state-wide, national and International competitions.[7][20][21] In 2004, officials said that over the past ten years their students have "scored in the 99th percentile on standardized tests", that 95 percent of their graduates attend college and "the school graduates 10 times the national average of National Merit Scholar finalists" "Critics contend that most private schools that charge $12,000 a year for high school tuition likely would be able to post similar numbers".[22] As of 2010, 34 students at the school have become National Merit Scholarship finalists and 40 students have been semi-finalists.[23][24]

The Arts Department consists of Visual Arts and Music. Vocal and instrumental music are offered during school hours and as extracurricular programs.

Maharishi School is a member of the Photo Imaging Education Association (PIEA). Middle and Upper School students have won awards in many of the PIEA International Student-Teacher Photo Competition and Exhibition events, including Grand Prizes in 2002 and 2004.[42][43]

In 2009, students won seven out of the eleven awards available in Iowa's Second Congressional District in the Congressional Art Competition, a nation-wide event sponsored by the members of the U.S. House of Representatives.[3][44]

In 2010, Maharishi students again "dominated" the competition in the Congressional Art Contest by taking the first and third place awards as well as "three of the six honorable mentions" in Iowa’s Second District. Senior Kenzie Wacknov received the top award.[45]

Maharishi School of the Age of Enlightenment competes in the south division of the Southeast Iowa Super Conference. School sponsored sports include cross-country, basketball, track, tennis, golf, boys’ soccer and girls’ volleyball. Any student can be a member of an interscholastic sports team. Varsity coaches attribute the success of their teams to the players’ practice of Transcendental Meditation.[46][47][48]

Students are required to wear a school uniform, which consists mainly of a white shirt and tie for boys and a white blouse and plaid skirt for girls.[50]

Parents of students support the mission of the school and the concept of consciousness-based education. Some families have moved to Fairfield so their children may attend Maharishi School.[51] The school has been showcased as a "Cool School" by Teen People magazine.[52]

The May 2004 issue of Worth Magazine featured Maharishi School, along with seven other private schools, as representing some of the "finest alternative private education options".[53]

Maharishi School was featured in a 2006 edition of the television show, CBS Sunday Morning.[3][54]

There are also Maharishi_Schools in Skelmersdale, UK and Melbourne, Australia.[57][58][59]