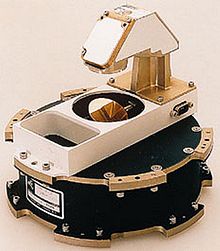 A reaction wheel is a type of flywheel used primarily by spacecraft for attitude control without using fuel for rockets or other reaction devices.

Momentum wheels (used in the Hubble Space Telescope) are a different type of actuator, mainly used for gyroscopic stabilization of spacecraft: momentum wheels have high rotation speeds (around 6000 rpm) and mass.[citation needed]

Reaction wheels are usually implemented as special electric motors, mounted along the x, y and z axes. Changes in speed rate (in either direction) are controlled electronically by computer controls. The strength of the materials of a reaction wheel determines the speed at which the wheel would come apart, and therefore how much angular momentum it can store.

Over time reaction wheels may build up stored momentum that needs to be cancelled. Designers therefore supplement reaction wheel systems with other attitude control mechanisms. In the presence of a magnetic field (as in low Earth orbit), a spacecraft can employ magnetorquers (better known as torque rods) to transfer angular momentum to the Earth through its magnetic field. In the absence of a magnetic field, the most efficient practice is to use high-efficiency attitude jets such as ion thrusters, or small, lightweight solar sails on the ends of projecting masts or solar cell arrays. Most spacecraft, however, also need fast pointing, and cannot afford the extra mass of three attitude control systems. Designers therefore usually use conventional monopropellant vernier engines to cancel reaction wheels, as well as for fast pointing.[citation needed]