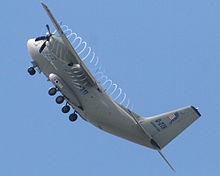 C-27J Spartan with propeller tip vortices condensation. The C-27J uses the same engines as the MV-22, but has higher disk loading. 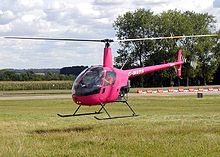 Disc loading of a hovering helicopter is the ratio of its weight to the total main rotor disc area. It is determined by dividing the total helicopter weight by the rotor disc area, which is the area swept by the blades of a rotor. Disc area can be found by using the span of one rotor blade as the radius of a circle and then determining the area the blades encompass during a complete rotation. As the helicopter is maneuvered, disc loading changes. The higher the loading, the more power needed to maintain rotor speed.[3]

Increasing the weight of a helicopter increases disk loading. For a given weight, a helicopter with shorter rotors will have higher disk loading, and will require more engine power to hover. A low disk loading improves autorotation performance in rotorcraft.[4] Typically, an autogyro (or gyroplane) has a lower rotor disc loading than a helicopter, which provides a slower rate of descent in autorotation.[3]

In reciprocating and propeller engines, disk loading can be defined as the ratio between propeller-induced velocity and freestream velocity.[citation needed] Lower disk loading will increase efficiency, so it is generally desirable to have larger propellers from an efficiency standpoint. Maximum efficiency is reduced as disk loading is increased due to the rotating slipstream; using contra-rotating propellers can alleviate this problem allowing high maximum efficiency even at relatively high disc loadings.[5]

The Airbus A400M fixed-wing aircraft will have a very high disk loading on its propellers, and this had to be factored into the design.[6]

The momentum theory or disk actuator theory describes a mathematical model of an ideal actuator disk, developed by W.J.M. Rankine (1865), Alfred George Greenhill (1888) and R.E. Froude (1889). The helicopter rotor is modeled as an infinitely thin disc with an infinite number of blades that induce a constant pressure jump over the disk area and along the axis of rotation. For a helicopter that is hovering, the aerodynamic force is vertical and exactly balances the helicopter weight, with no lateral force.

For an actuator disk of area A, with uniform induced velocity v at the rotor disk, and with ρ as the density of air, the mass flow rate

through the disk area is:

By conservation of mass, the mass flow rate is constant across the slipstream both upstream and downstream of the disk (regardless of velocity). Since the flow far upstream of a helicopter in a level hover is at rest, the starting velocity, momentum, and energy are zero. If the homogeneous slipstream far downstream of the disk has velocity w, by conservation of momentum the total thrust T developed over the disk is equal to the rate of change of momentum, which assuming zero starting velocity is:

By conservation of energy, the work done by the rotor must equal the energy change in the slipstream:

So the velocity of the wake far downstream is twice the velocity at the disk, which is the same result for an elliptically loaded fixed wing predicted by lifting-line theory.[7]

Between the disk and the distant wake, we have:

The total pressure in the distant wake is:

Below the disk, the pressure change is:

The pressure along the slipstream is always falling downstream, except for the positive pressure jump across the disk.[7]

From the momentum theory, thrust is:

The induced velocity is:

Where T / A is the disk loading as before, and the power P required in hover (in the ideal case) is:

Therefore the induced velocity can be expressed as:

So, the induced velocity is inversely proportional to the power loading T / P.[8]