Black was born in Chicago, Illinois, the son of Jill, a store owner, and Robert Schwartz, an executive.[1] He grew up in Hillsborough Township, New Jersey,[2] where he attended Hillsborough High School. His parents divorced when he was three years old. When he was twelve, his father died during neurological surgery following a mysterious assault. His birth name, Schwartz, is derived from the German word "schwarz," which has the same meaning as his stage name, Black. Schwartz changed his name to Michael Ian Black because there was already a popular actor named Michael Schwartz.[3]

Black is known for appearing on VH1's I Love the... series, his Stella comedy troupe, and a variety of other TV series and films. He was also the voice actor behind the Pets.com sock puppet, is the main subject in the current Sierra Mist commercials, hosted the first season of NBC's hidden-camera show Spy TV, made several appearances in the film Big Helium Dog, and had a supporting role on the NBC dramedy Ed.

He began his career as a member of the comedy group The State and was featured on the television show by the same name on MTV. He continued working with members of that group on the show Viva Variety in the role of "Johnny Bluejeans", and in the film Wet Hot American Summer. His dry, sarcastically irreverent commentary on pop culture artifacts on VH1's "I Love the 70s/80s/90s/New Millennium" series has added to his and the shows' popularity. Black has stated several times on the show that he feels as if he is "doomed to an eternity of doing the 'I Love the...' series". He also makes fun of himself for being a Jewish-American and sarcastically enforcing the Jewish stereotypes. 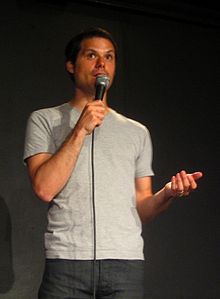 In the latter part of 2004, he acted as guest-host of CBS's The Late Late Show while auditioning for the permanent hosting role. He was a finalist for the position, although the job eventually went to Craig Ferguson. He is also an occasional contributor to the online edition of McSweeney's, where he writes a column titled "Michael Ian Black Is a Very Famous Celebrity"[3].

Black, along with fellow State members Michael Showalter and David Wain, co-starred in and co-wrote the Comedy Central series Stella, a television adaptation of their popular stage show. The ten-episode first season debuted in June 2005 and was not renewed for a second season.

Black wrote the screenplays for two feature film comedies —Wedding Daze (2006) and Run, Fat Boy, Run (2007, co-written with leading actor Simon Pegg).[4] Black also directed Wedding Daze which stars Jason Biggs, Joe Pantoliano, and Isla Fisher.[5] Black also has some minor screen credits. He appeared twice on the Adult Swim show, Tom Goes to the Mayor, and was a guest voice on Seth Green's stop-motion show Robot Chicken, and later did a bit for "Tim and Eric Awesome Show, Great Job!". He appeared on the Comedy Central shows Crank Yankers and Reno 911!. He had a cameo in David Wain's 2007 film, The Ten as a prison guard. In September 2007, he released his first stand-up comedy album, I Am a Wonderful Man. In addition, he starred on the TV series Reaper as a gay demon trying to destroy the devil through acts of kindness.[6] Most recently, Black wrote a book titled My Custom Van ... And 50 Other Mind-Blowing Essays That Will Blow Your Mind All Over Your Face, which was published on July 15, 2008.

Black is the host of Reality Bites Back, a scripted reality show that premiered July 17 on Comedy Central.

Black also developed another show for Comedy Central titled Michael Ian Black Doesn't Understand.[7] The concept was later retooled as Michael & Michael Have Issues; a pilot episode, featuring Michael Showalter, was shot in August 2008.[8] Comedy Central confirmed in February 2009 that a seven-episode run of the show would air in July.[9]

His first children's book, Chicken Cheeks, was published by Simon & Schuster Children's Publishing on January 6, 2009. The book is illustrated by Kevin Hawkes. In a starred review, Kirkus called the book "a perfect collaboration of text and illustration." An alternative review was aired on the Michael Showalter Showalter.[10]

Michael Black appeared in several Sierra Mist and Klondike commercials, and an eBay commercial with Showalter.

On February 21, 2009, Black instigated a "Celeb-Feud" — or as he called it, the "World's First Twitter War" — with LeVar Burton to see if he can muster more followers than Burton on the popular networking site Twitter. Black dubbed the feud "LeWar."

In 2010, he started a podcast, 'Mike and Tom Eat Snacks' with his former Ed castmate Tom Cavanagh.[11]

It was announced that Black would be co-writing a book entitled Stupid for America with Megan McCain. The two are planning a road trip across America in the summer of 2011. [12]

Black has been an amateur poker enthusiast for several years, and is a regular player or "famous face"[16] on the online poker website, Hollywood Poker, which is run in conjunction with Ongame Network. He has appeared on a number of episodes of Celebrity Poker Showdown as a celebrity competitor — he has appeared in five episodes, more than any other player. He first appeared in the third game of the first season (2003), playing to earn money for the Endeavor House charity. He lost to Nicole Sullivan, who would go on to win the entire tournament. His performance improved in the third game of the second season (2004), where he played for the charity MAZON: A Jewish Response to Hunger and won a game with Star Jones, Norm Macdonald, Adam Rodriguez and Jeremy Sisto, earning the silver chip after a lengthy "see-saw" battle with Macdonald and proceeding to the final table. However, he was knocked out early in the finals.

Black returned to the show in 2006, appearing in the second episode of the eighth season and playing for MAZON again. There, Black defeated Greg Behrendt, Jorge Garcia, Kim Coles, and Andrea Martin, and made Celebrity Poker Showdown history by knocking out three players (Martin, Coles and Garcia) in three consecutive hands. In the final table, he came in third (receiving $100,000 for his charity), with Jason Alexander winning the tournament (receiving $500,000 for his).

Black has made a mark in his appearances both for his jokes and antics and for his skilled, aggressive-but-controlled poker play. Black has been repeatedly praised by Dave Foley, host of Celebrity Poker Showdown, and by the two poker experts who have commented on the show, Phil Gordon and Phil Hellmuth. Gordon has listed Black among eight of the best celebrities he's ever seen on the show,[17] and Hellmuth considered him one of the best players in the eighth tournament[18] and a favorite to win after Jennifer Tilly's elimination. He and Foley argued over who would get to pick him to win in his two appearances.