The Torrent Duck (Merganetta armata) is a member of the duck, goose and swan family Anatidae. It is the only member of the genus Merganetta. Today it is placed in the shelduck subfamily Tadorninae after the "perching duck" assemblage where it was formerly assigned to was dissolved because it turned out to be paraphyletic[citation needed]. Its closest relative may be the Blue Duck of New Zealand[citation needed].

This 43–46-centimetre (17–18 in) long species is a resident breeder in the Andes of South America, nesting in small waterside caves and other sheltered spots. Like the Blue Duck, it holds territories on fast flowing mountain rivers, usually above 1,500 metres (4,900 ft). It is a powerful swimmer and diver even in white water, but is reluctant to fly more than short distances. It is not particularly wary when located.

Male Torrent Ducks have a striking black and white head and neck pattern and a red bill. In flight they show dark wings with a green speculum. 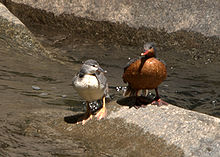 A juvenile and a female on the Urubamba River, Peru 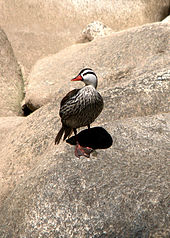 Male on the rocky banks of the Urubamba River, Peru

Females of all subspecies are somewhat smaller than the drakes; they have orange underparts and throat, with the head and upperparts grey and a yellower bill. Juveniles are pale grey above and whitish below.

The male's call is a shrill whistle, and the female's is throatier whistle.

This is a declining species now due to competition for its invertebrate food from introduced trout, pollution, forest destruction, and damming of mountain rivers for hydroelectric schemes. The Chilean population seems to be relatively stable.