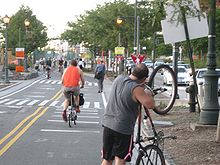 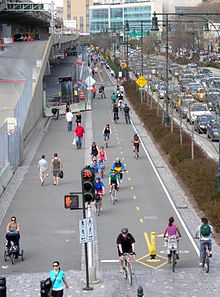 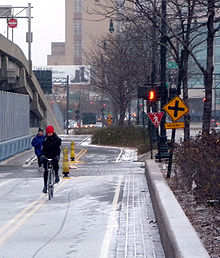 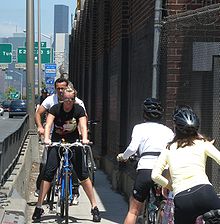 The narrowest bit of East River Greenway, in the East Village

The Manhattan Waterfront Greenway is a foreshoreway for walking or cycling, 32 miles (51 km) long, around the island of Manhattan. The largest portions are operated by the New York City Department of Parks. It is separated from motor traffic, and many sections also separate pedestrians from cyclists. There are three principal parts:

HRGW is the longest, running along the West Side, from Dyckman Street in the north to Battery Park in the south, mostly through Riverside Park and Hudson River Park. A gap in West Harlem was filled in early October 2008 with the opening of the Harlem Piers bike lane. A roughly 10-block detour in the west 80s, where a walkway had crumbled into the river in the late 20th century,[1] was eliminated on May 20, 2010, when the rebuilt section of greenway was opened.[2]

The Hudson River Greenway is the most heavily used bikeway in the United States.[3] Most is near Hudson River water level, except the portion north of George Washington Bridge where it climbs steeply, to approximately 160 feet (50 m) and includes Inspiration Point.

Near the downtown end, ongoing renovation work on the South Ferry subway station is to result in a connection through Battery Park to the East River Greenway. Travelers to Brooklyn use a bike lane in Warren Street and a one-way bike path (opened in September 2008) through the north end of City Hall Park to connect to the Brooklyn Bridge. Those arriving from Brooklyn use lanes in Park Row and Murray Street to reach the Greenway.

Footpaths continue a mile north from Dyckman Street into Inwood Hill Park alongside the western ball fields, at which point the path crosses the Amtrak rail tracks using a bridge with steps. This continues northeast into the park as part of the park trail system and connects north to bikeways in Spuyten Duyvil in the Bronx via the Henry Hudson Bridge, and east to the bike lane on 218th St leading to the Broadway Bridge. However, Inwood Hill Park currently bans bicycles on all paths so the connections are not technically recognized nor officially encouraged at this time.

This runs along the East Side from The Battery and past South Street Seaport to East Harlem with a 1.3 mile (2 km) gap from 34th to 60th streets in Midtown where pedestrians use busy First and Second Avenues to get around United Nations Headquarters between the Upper East Side and Kips Bay portions of the Greenway. Cyclists going further north who do not wish to carry their bike up a long flight of stairs skip the 60th Street access and continue in the on street bike lane another mile (1.7 km) to 83rd Street. Some places are narrow due to sinkholes being blocked off by protective fencing, and one part squeezes between the highway and the dock of Con Edison's East River Station, requiring slower speeds. Other parts are shared space with motor access to Waterside Plaza or a filling station. Approximately a mile near the southwest end is in the shadow of the elevated FDR Drive.

In the summer of 2008 the East River Greenway along with the Brooklyn Promenade provided viewing locations to see the New York City Waterfalls.

In October 2011, the city and state reached an agreement to use the western portion of Robert Moses Playground for an expansion of the United Nations campus. In exchange, the United Nations Development Corporation would pay $73 million to fund the development of the gap in the Greenway between 38th and 60th streets.[4]