Dye tracing is tracking and tracing various flows using dye added to the liquid in question. The purpose of tracking may be an analysis of the flow itself, of the transport of something by the flow of the objects that convey the flow. It is an evolution of the ages-known float tracing method, which basically consists of throwing a buoyant object into a waterflow to see where it goes or where it emerges.

Dye tracking may be either qualitative, i.e., the presence of particular flow and its estimate, or quantitative, when the amount of the traced dye is measured by special instruments. 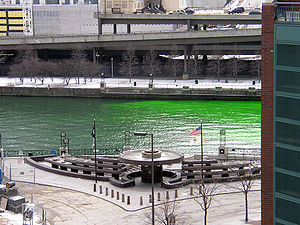 Dye in the Chicago River on the St. Patrick's Day (added for celebration, rather than tracing)

Often fluorescent dyes are used for this purpose, especially in the following circumstances

Fluorescein is among the first fluorescent dyes, developed in 1871. Its disodium salt under the trademark "Uranine" was developed several years later and still remains among the best tracer dyes.[1]

Carbon sampling was the first method of technology-assisted dye tracing that was based on the absorption of dye in charcoal. Charcoal packets may be placed along the expected route of the flow, later the collected dye may be chemically extracted and its amount subjectively evaluated.

Filter fluorometers were the first devices that could detect dye concentrations beyond human eye sensitivity.

Spectrofluorometers developed in the mid-1980s made it possible to perform advanced analysis of fluorescence.

Filter fluorometers and spectrofluorometers identify the intensity of fluorscence that is present in a liquid sample. Different dyes and chemicals produce a distinctive wavelength that is determined during analysis.

Water flows, differentiated by the environment, possess certain factors that can affects how a dye performs. Natural fluorescence in a water flow can interfere with certain dyes. Presence of organics, other chemicals, and sunlight can influence the intensity of dyes. Each sampling area is analyzed by a quantitative instrument to test the background fluorescence.

Dye tracing may be used for the analysis of blood circulation within various parts of the human or animal body. For example, fluorescent angiography, a technique of analysis of circulation in retina is used for diagnosing various eye diseases.