Maya April Moore (born June 11, 1989) is an American basketball forward for the Minnesota Lynx of the WNBA and Ros Casares Valencia of Euroleague. Moore was the winner of the 2006 and 2007 Naismith Prep Player of the Year. She was selected as the John Wooden Award winner in 2009 after leading Connecticut to the undefeated national championship. The following season, Moore led Connecticut to capture its second national championship and continued its overall undefeated game-winning streak at 78; in the 2010–11 season, she led the Huskies to extend that streak to an NCAA both-gender record (all divisions) of 90. On May 18, Maya made history by becoming the first female basketball player to sign with Jordan Brand.[1]

Moore was the first overall pick in the 2011 WNBA Draft, and joined a Minnesota Lynx team that already featured all-star caliber players in Seimone Augustus and Lindsay Whalen. Moore was the third-leading scorer on the team during the regular season with 13.2 points per game, which led all rookies. Moore earned Rookie of the Year honors.[2] Moore then helped lead her team to its first WNBA championship.

Maya April Moore was born on June 11, 1989 in Jefferson City, Missouri. She is the daughter of Kathryn Moore. [3] Moore had her first exposure to basketball at the age of three. Her mother mounted a hoop on the back door of their apartment.[4]

As a junior in 2005–06, she was named the Naismith Prep Player of the Year after leading Collins Hill High School to Georgia's Class 5A state championship. She was only the second junior to win the Naismith award[5] Her first dunk was one-handed off an alley-oop pass in warm-ups at a dunk contest in Charlotte, NC in December 2005. She was 16 at the time.[6]

In December 2006, she led the Collins Hill Eagles over Poly (Long Beach, California) by a score of 75–61, resulting in her being selected unanimously as the Most Valuable Player of the Tournament of Champions in Chandler, Arizona. In the title game of the "T-Mobile Invitational" in Seattle, she scored 48 points in a win over St. Elizabeth (Wilmington, Delaware).

In 2007, Moore became Collins Hill High School's all-time leader in points and rebounds. During her four seasons at Collins Hill, the school amassed a 125–3 record.[5] Moore won 3 Georgia Class 5A State Championships. Collins Hill was ranked No. 1 and claimed the crown of National Champions in 2007 by USA Today (Ranked No. 2 in 2006 and Ranked No. 5 in 2005). Moore announced that she would play college basketball at the University of Connecticut.[7]

After she led Collins Hill High School to a third straight Georgia Class 5A state championship she received her second Naismith Prep Female Player of the Year in 2007.

Moore was named a WBCA All-American.[8] She participated in the 2007 WBCA High School All-America Game, where she scored 25 points[9] and earned MVP honors for the Red team.[10]

Moore led the Huskies to a 36–2 record in the 2007–08 NCAA season, their best record since their Final Four appearance of 2004. During the season, Moore averaged a team-high 17.8 points per game, and hit 42% of her three point shots. She was second to Candace Parker in the Associated Press Player of the Year voting. Moore also placed second on the team in rebounds with 7.6 per game and blocks with 1.6 per game. She was the first freshman, male or female, to be named the Big East Player of the Year. Moore won the award again as a sophomore. Moore's teammate, Tina Charles, won the award in 2010, while Moore went on to win the award in 2011, joining Villanova's Shelly Pennefather and former UConn player Kerry Bascom as three-time recipients.[11]

In 2010, Moore lead the team in scoring and steals, and tied Charles for total rebounds en route to a 39–0 season, culminating in an NCAA National Championship.[12]

On March 7, against Syracuse, Maya Moore scored the 2,000th point of her college career. She is the first player at UConn to accomplish this feat as a junior.[13]

During the 2009–10 season, some of the sports media considered whether the dominance of the UConn program was bad for women’s basketball. Some concluded it was not bad for the game, and supported the notions of playing hard and trying to play a beautiful game.[14]

Moore was the subject of an ESPN Sports Science video clip, discussing her vertical leap, court vision, and muscle memory. They discussed her ability to steal, noting that she can move her hands faster than the striking speed of a rattlesnake.[15]

Moore was named an AP First team All-American, the fourth time she has earned the honor, and only the second player in history to earn First Team honors for four years. The first such recipient was Courtney Paris.[16]

Moore was invited to the USA Basketball Women's National Team training camp in the fall of 2009, one of only three college players and the only junior to be invited to the training camp.[17] The team selected to play for the 2010 FIBA World Championship and the 2012 Olympics is usually chosen from these participants. At the conclusion of the training camp, the team will travel to Ekaterinburg, Russia, where they compete in the 2009 UMMC Ekaterinburg International Invitational.[17]

Moore was one of twenty players named to the national team pool. Twelve of this group will be chosen to represent the USA in the 2010 World Championships and the 2012 Olympics.[18] 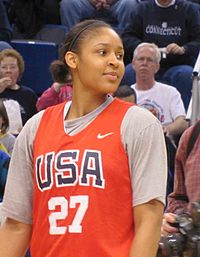 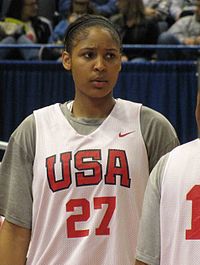 The USA National team began training in April 2010 to prepare for the FIBA World Championship starting in September 2010. Moore was one of the players selected for the training sessions, run by the national team coach Geno Auriemma. The teams played informal scrimmages, with one team made up of the players expected to be on the national team, and the other team made up of invited all star college players, referred to as the select team. Although Moore is still in college, she has been invited to be part of the national team. In the first two ten-minute games, Moore played with the national team and helped them to two wins. Then Moore switched jerseys, and played for the select team. In both games, the select team won, with Moore making the assist to put the team ahead, then stealing the ball and making the game winning shot in the final seconds. Moore ended up being on the winning side in all four games.[19]

Moore was selected 1st overall in the 2011 WNBA Draft by the Minnesota Lynx.[22] She joined a team that already featured talented players like Lindsay Whalen, Rebekkah Brunson, and Seimone Augustus, and helped the Lynx to their best record in franchise history, as well as the best record in the WNBA.[23] Moore was named WNBA Rookie of the Month for July and August, and played in the WNBA All-Star Game.[24][25] Though Moore admitted that she struggled at times to adapt to the extraordinary level of talent in the WNBA, her play still earned her Rookie of the Year honors.[26]

During the playoffs, Moore was her team's second-leading scorer. She led her team in scoring once, in the final game of the Western Conference finals, when she poured in 21 points, including six three-pointers.[27] In October of 2011, Maya became only the second player in league history to win Rookie of the Year honors and a WNBA championship in the same year.[28][29]

Moore has signed with Ros Casares Valencia of Euroleague Women for the 2011–2012 season. She is expected to join the team late due to her title run with the Lynx.[30] 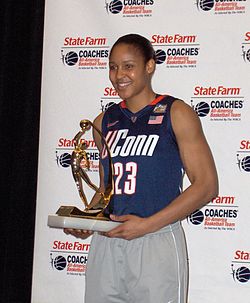 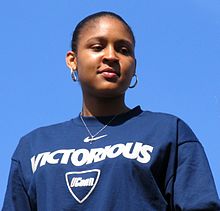