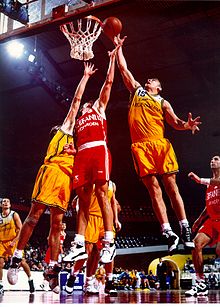 Rebounds are divided into two main categories: "offensive rebounds", in which the ball is recovered by the offensive side and does not change possession, and "defensive rebounds," in which the defending team gains possession. A majority of rebounds are defensive because the team on defense tends to be in better position (in other words, closer to the basket) to recover missed shots. Offensive rebounds lead to another opportunity to score for the offensive team, either right away or by resetting the offense. A block is not considered a rebound. Team rebounds are credited to a team that gains possession of the ball after any missed shot that is not cleared by a single player (i.e. deflected out of bounds after the shot, blocked out of bounds, etc.). A team rebound is never credited to any player, and is generally considered to be a formality, as according to the rules of basketball, every missed shot must be rebounded whether a single player controls the ball or not.

Rebounds are credited to the first player that gains clear possession of the ball or to a player that successfully deflects the ball into the basket for a score. There are many attributes characteristic of great rebounders, the most common are height and strength. Because height is so important, most rebounds are made by centers and power forwards. However, some smaller players can be excellent rebounders; for example Jason Kidd, point guard for the Dallas Mavericks, led the New Jersey Nets in rebounding for several years. Great rebounders must also have a keen sense of timing. Great leaping ability is also an asset, but not necessary. Players such as Larry Bird and Bobby Jones were good rebounders, but never known for their leaping ability. (Bird has been quoted as saying "Most rebounds are taken below the rim. That's where I get mine." [1])

Note that a ball does not need to actually "rebound" off the rim or backboard for a rebound to be credited. Rebounds are credited after missed shots, including air balls.

Boxing out is a technique used to obtain rebounds. It is important that players position themselves in the best spot to get the rebound. This is done primarily by boxing out. A player boxes out an opponent by positioning himself between the other player and the basket, and maintaining body contact with the player he is guarding. The action can also be called "blocking out". A team can be boxed out by several players using this technique to stop the other team from rebounding. Because fighting for a rebound can be very physical, rebounding is often regarded as "grunt work" or a "hustle" play.

Statistics of a player's "rebounds per game" or "rebounding average"—including offensive, defensive. and total—measure a player's rebounding effectiveness by dividing the number of rebounds by the number of games played. Rebound rates go beyond raw rebound totals by taking into account external factors unrelated to a player's ability, such as the number of shots taken in games and the percentage of those shots that are made.

Notable rebounders in the NBA

Other great rebounders, past and present, include

Some other notable rebounders in the NBA today include Andrew Bogut, Tyson Chandler, Kevin Love, Zach Randolph, and David Lee.