Slam dunk
This article is about a type of basketball shot. For other uses, see Slam dunk (disambiguation). 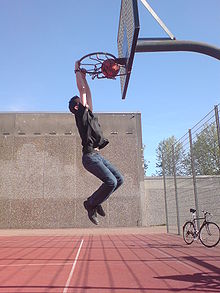 A slam dunk is a type of basketball shot that is performed when a player jumps in the air and manually powers the ball downward through the basket with one or both hands over the rim.[1] This is considered a normal field goal attempt; if successful it is worth two points. The term "slam dunk" was coined by Los Angeles Lakers announcer Chick Hearn.[2] Prior to that, it was known as a dunk shot.[1]

The slam dunk is one of the highest percentage shots one can attempt in basketball as well as one of the most crowd-pleasing plays. Slam dunks are also performed as entertainment outside of the game, especially during slam dunk contests. Perhaps the most popular such contest is the NBA Slam Dunk Contest held during the annual NBA All-Star Weekend. The first slam dunk contest was held during an American Basketball Association All Star Game.

Dunking was banned in the NCAA from 1967 to 1976. Many have attributed this to the dominance of the then-college phenomenon Lew Alcindor (now called Kareem Abdul-Jabbar) upon his entry into the NCAA. Subsequently, the no-dunking rule is sometimes referred to as the "Lew Alcindor rule."[3][4]

The phrase "slam dunk" has since entered popular usage, meaning a "sure thing" – an action with a guaranteed outcome. 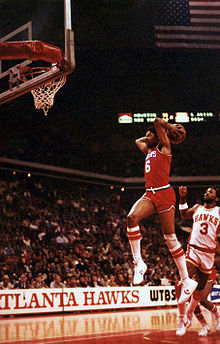 Olympic Gold Medalist Bob Kurland was a 7-foot center and the first player to regularly dunk during games in the 1940s and 50's. Wilt Chamberlain was known to have dunked on an experimental 12-foot basket set up by Phog Allen at the University of Kansas in the 1950s.[5] Michael Wilson, a former Harlem Globetrotter and University of Memphis basketball player, matched this feat on April 1, 2000 albeit with an alley-oop. Dwight Howard dunked on a 12 ft basket in the 2009 NBA dunk contest also off an alley-oop.

Jim Pollard,[6] Wilt Chamberlain,[5] Julius Erving, Michael Jordan, Scottie Pippen, Stromile Swift, Grant Hill, Darrell Griffith, Korleone Young, Edgar Jones, James White, Jason Richardson, Mike Conley, Sr., Serge Ibaka, Dwight Howard, Samuel Dalembert, Brent Barry, Gerald Wallace and Josh Smith have each completed a dunk from the free-throw line, which is 15 feet from the basket. Unlike the others, Wilt Chamberlain did not require a full running start, but instead began his movement from inside the top half of the free throw circle.[5]

Several notable and remarkable dunks have been performed by players at the annual NBA Slam Dunk Contest. Spud Webb at 5'7" (1.70 m) defeated 6'8" (2.03m) Dominique Wilkins in the 1986 contest. Michael Jordan popularized a dunk referred to by some fans as "kiss the rim". This dunk was so called because Jordan's body was not perpendicular to the ground while performing the dunk.[citation needed] TNT viewers rated it "the best dunk of all time" over Vince Carter's between-the-legs slam.

Vince Carter dunked while leaping over 7-foot-2 (2.18 m) French center Frédéric Weis in the 2000 Summer Olympics. The French media dubbed it "le dunk de la mort" — "the dunk of death." Carter is also known for introducing the "Honey Dip" or the "cookie jar" dunk in the 2000 Slam Dunk Contest, where Carter demonstrated it hooking his forearm/elbow into the rim after dunking and hanging. The "Honey Dip" at the time was unnamed. Carter used it as his speciality dunks along with his Reverse 360 Windmill dunk and between-the-legs dunk. When performed much of the audience was speechless, including the judges, because none had seen these types of amazing dunks before (although, Carter's 360 Windmill dunk is closely reminiscent of Kenny Walker's winning "Tomahawk" dunk in 1989).

In the 2008 Sprite Rising Star's Slam Dunk Contest Dwight Howard performed the "Superman" dunk. He donned a superman outfit as Orlando Magic guard Jameer Nelson tied a cape around his shoulders. Nelson alley-ooped the basketball as Howard jumped from just inside the foul line, caught the ball, and threw it through the rim. This dunk is considered controversial, as his hand was not over as well as on a vertical plane to the rim. Some insist that it should in fact be considered a dunk because the ball was thrust downward into the basket, meeting the basic definition of the dunk. During the following year's dunk contest, Howard had the arena bring a separate basket onto the court that was reported to be 12 feet high. Howard, after going into a classic telephone booth near the stands and coming out with his cape, used a pass from Nelson to easily dunk two-handed. While this was not performed for record-setting purposes, the dunk received a perfect score and a warm response from the crowd, in part because of its theatrics. Also in this contest, 5'9" guard Nate Robinson wore a green New York Knicks jersey and green sneakers to represent Kryptonite, counteracting Howard's Superman theme. He used a green "Kryptonite" ball, and jumped over the 6'11" Howard while dunking. This dunk essentially won the competition for Robinson, who was voted the winner by the NBA fans. Robinson then thanked Howard for gracefully allowing him to dunk on him, asking the crowd to also give Howard a round of applause.

The only player that has proven the ability to perform a 720 degree dunk (that is, two full turns in the air) is Taurian Fontenette also known as Air Up There during a Streetball game.[7]

In the past, it has been possible for players to dunk a basketball and pull the rim down so hard that the glass backboard shatters, either around the rim itself or, at times, shattering the entire backboard. Reinforced backboards and rims have minimized this at the college and professional levels, but it still happens at lower levels. All-star power forward Gus Johnson of the Baltimore Bullets was the first of the famous backboard breakers in the NBA, shattering three during his career in the 1960s and early 1970s.[8] Darryl Dawkins of the Philadelphia 76ers was also notorious for two glass-shattering dunks in 1979 resulting in the league threatening to fine him and eventually installing breakaway rims.[9] At the beginning of his career, center Shaquille O'Neal also dunked so hard that he broke the supports holding two backboards during games against the New Jersey Nets and the Phoenix Suns, making them collapse to the ground; the glass would shatter all over anyone within a few feet (including the audience). This resulted in reinforced backboard supports as well. During that same season, New Jersey's Chris Morris shattered a backboard in a game against the Chicago Bulls (the most recent shattered-backboard incident in the NBA to date). The NBA has made shattering the backboard a technical foul. This has assisted in deterring this action, as it can cost the team points.

In the ABA, Charlie Hentz broke two backboards in the same game on November 6, 1970 resulting in the game being called.[10] In the NCAA, Darvin Ham shattered a backboard while playing for Texas Tech in a tournament game against the University of North Carolina in 1996.

The Premier Basketball League has had two slam-dunks that have resulted in broken backboards. Both came consecutively in the 2008 and 2009 PBL Finals, and both were achieved by Sammy Monroe of the Rochester Razorsharks. 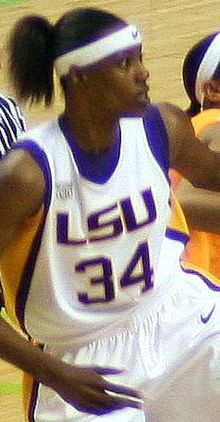 Sylvia Fowles is one of four players to score a dunk during a WNBA game.

Dunking is much less common in women's basketball than in men's play. Georgeann Wells, as a 6'7" junior playing for West Virginia University became the first woman to score a slam dunk in women's collegiate play, in a game against the University of Charleston on December 21, 1984.[11]

In professional WNBA play, a total of six dunks have been scored. Lisa Leslie of the Los Angeles Sparks was the first to score a dunk, on July 30, 2002 against the Miami Sol. Leslie also scored the second dunk in WNBA history on July 9, 2005. Other professional women's players who have scored dunks are Michelle Snow, Candace Parker (twice), and Sylvia Fowles.

Use as a phrase

One of many sports idioms, the phrase "slam dunk" is often used outside of basketball to refer colloquially to something that has a certain outcome or guaranteed success (a "sure thing").[12]