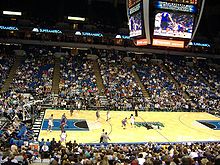 In basketball, the basketball court is the playing surface, consisting of a rectangular floor with tiles at either end. In professional or organized basketball, especially when played indoors, it is usually made out of a wood, often maple, and highly polished. Outdoor surfaces are generally made from standard paving materials such as concrete or asphalt (i.e., blacktop/tarmac).

The object of the game is to shoot the ball through the hoop at either end of the court. When the game was first invented, actual peach baskets were used. Dr. James Naismith's original rules specified that "A goal shall be made when the ball is thrown or batted from the grounds into the basket and stays there, providing those defending the goal do not touch or disturb the goal." [1] However, because it proved to be inconvenient to continually retrieve the ball from the baskets, the baskets were soon replaced by metal hoops (usually with dangling netting attached to direct the ball straight down.) The hoops are attached to rectangular (or sometimes fanshaped) backboards made of either metal, fiberglass, acrylic, or tempered glass.

Diagram of basketball court and backboard

* The NBA three-point line is 3 ft (0.91 m) from the sideline in a zone starting at the baseline and ending when it crosses the 23 ft 9 in (7.24 m) arc. The 22 ft (6.7 m) measurement applies only at a point where a line parallel to the baseline intersects the long axis of the court and the center of the basket.

Sections of the basketball court

The only two players permitted to enter this area prior to the tipoff are the players contesting the jump ball (usually but not always centers). They both have to jump when the referee throws the ball in the air to attempt to push the ball into the hands of a player of their own team.

The distance to the three-point from the center of the basket varies depending on the level or league, and has changed several times. These are the current distances, with the league or level using each distance:

In college basketball as well as in most high school associations in the United States, the distance is 19.75 feet. On May 26, 2007, the NCAA playing rules committee agreed to move the three-point line back one foot to 20.75 feet for the men. This rule went into effect for the 2008-2009 season. The three-point line for women (NCAA) remains at 19.75 feet.

The international distance, used in most countries outside the United States and in FIBA competition, is currently 20.5 feet (6.25 m). The same goes for the WNBA.

The low post is defined as the areas that are closest to the basket but outside of the free throw lane.[4] This area is fundamental strategy in basketball. Skilled low post players can score many points per game without ever taking a jump shot.

The key or shaded lane refers to the frequently painted area beneath the basket; for NBA, it is 16 feet (4.9 m) wide, for the NCAA it is 12 feet (3.7 m) wide; for both instances it is 15 feet (4.6 m) from the backboard. At the top of the rectangle is the free-throw line, behind which players shoot uncontested shots when they're fouled in the act of shooting or any other penalty. A circle is drawn beyond the free-throw line with a 6 feet (1.8 m) radius; this is used for jump ball instances similarly done at the center circle. There are two 6 in hashes, 3 ft from the free throw line. These marks serve no purpose, though NBA Rule 1 (g) requries them to be drawn.

The key is primarily used to prevent players from staying beneath the basket of the opponents' team for long periods (maximum 3 seconds).

The restricted area arc is an arc 4 feet (1.22 m) from the center of the basket. With some exceptions, defending players can't force offensive fouls in this area.

At NBA floors, two lines are drawn at the end lines near the key - the area directly behind the lines designates the spot where teams on the offensive can inbound the ball.

A similar line parallel to the verticals of the three-point line in NBA floors serves with the same purpose; also this line demarcates the farthest extent a coach (aside from the sidelines) can stay. Directly behind this area is the team bench.

On the half-court line at NBA floors there are 2 lines extending outside the playing court designating the place where substitutes wait before they can enter the playing court; directly behind this area are the various off-court officials such as the timekeeper and reserve referee.

On April 26, 2008, FIBA announced several major rules changes involving the court markings. These changes will take effect for major international competitions on October 1, 2010, after that year's World Championships for men and women, and become mandatory for other competitions on October 1, 2012 (although national federations can adopt the new markings before 2012). The changes will be:[5]