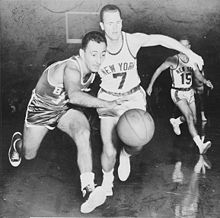 Point guard (PG), also called the play maker or "the ball-handler", is one of the standard positions in a regulation basketball game. A point guard has perhaps the most specialized role of any position – essentially, he is expected to run the team's offense by controlling the ball and making sure that it gets to the right players at the right time. Above all, the point guard must totally understand and accept his or her coach's game plan; in this way, the position can be compared to a quarterback in American football.

A point guard, like all player positions in basketball, has specific characteristics that are essential for them to help guide their team to a victory. The Basketball Handbook by Lee Rose describes a point guard as a coach on the floor, who can handle and distribute the ball to teammates. It also states that the more speed a point guard has, the more likely he will be able to create separation and space off the dribble, which allows the point guard room to work. Point guards should also be vocal floor leaders, and should discuss rule interpretations with officials. A point guard must always know the time on both the shot clock and the game clock, the score, the number of timeouts for both teams, and whom to foul late in the game.

Most current NBA point guards are between 5'11" and 6'4" (1.93 m) or shorter in height. A true point guard's job is to create scoring opportunities for his team. The role includes passing and running the offense: setting up plays on the court, getting the ball to the teammate that he feels is in the best position to score, and dictating the tempo of the game. This also means knowing when and how to instigate a fast break and when and how to initiate the more deliberate sets.[1]

After an opponent scores, it is typically the point guard who brings the ball down court to begin an offensive play. For this reason, passing skills, ball handling, and court vision are pivotal. Point guards are often evaluated more on their assist totals than on their scoring. Another major evaluation factor is Assist-to-Turnover ratio, which indicates the decision-making skills of the player. John Stockton, who is considered one of the greatest point guards of all time, is the NBA's all time leader in assists and steals. Still, a first-rate point guard should also have a reasonably effective jump shot.

If a point guard has more size (height, muscle) compared to the prototypical point guard, it is considered a plus, but size is only secondary to awareness and ball skills. Among the taller players who have enjoyed success at the position is Magic Johnson, who was 6'9"/2.06 m and won the National Basketball Association Most Valuable Player Award three times in his career. Other point guards who have been named the NBA MVP include Bob Cousy, Oscar Robertson (who somewhat foreshadowed Johnson in that he was 6'5"/1.96 m, the size of many forwards in his era), and the relatively undersized Steve Nash who is a two-time winner. 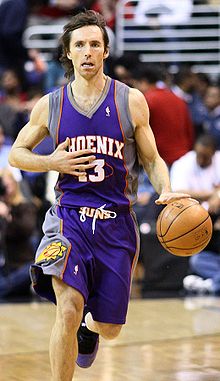 Steve Nash brings the ball up the court.

The point guard is almost always positioned on the perimeter of the play, so as to have the best view of the action. This is a necessity because of the point guard's many leadership obligations. Many times, the point guard is referred to by announcers as a "coach on the floor" or a "floor general". In the past, this was particularly true, as several point guards such as Lenny Wilkens served their team as a player-coach. This is not so common anymore, as most coaches are now solely specialized in coaching and are non-players. Some point guards are still given a great deal of leeway in the offense, such as Steve Nash of the Phoenix Suns. Former Suns head coach Mike D'Antoni had allowed him to freelance often when leading the Suns' offense, even letting Nash call his own plays at times. Even point guards who are not given this much freedom, however, are still extensions of their coach on the floor and must display good leadership skills.

After overall ball-handling, passing and scoring are the next most important areas of the game for a point guard. As the primary decision maker for a team, a point guard's passing ability determines how well a point guard is able to put his or her decision into play. It is one thing to be able to recognize the player that is in a tactically advantageous position, but it is another thing entirely to able to deliver the ball to that player. For this reason, a point guard is usually, but not always, more skilled and focused on passing than shooting. However, a good jump shot and the ability to score off a drive to the basket are still valuable skills. A point guard will often use his or her ability to score in order to augment his or her effectiveness as a decision maker and play maker.

In addition to the traditional role of the point guard, modern teams have found new ways to utilize the position. Notably, several modern point guards have used a successful style of post play, a tactic usually practiced by much larger centers and forwards. Working off of the fact that the opposing point guard is in all probability an undersized player with limited strength, several modern point guards have developed games close to the basket that include being able to utilize the drop step, spin move, and fade away jump shot. Former New York Knicks & Indiana Pacers PG Mark Jackson, and Chauncey Billups (now of the New York Knicks) are notable examples of players who frequently use this style of play.

In recent years, the sport's shift from a fundamental style of play to a more flashy, scoring-orientated game has resulted in the proliferation of so-called combo guards at the point guard position. These stronger more athletic point guards players, e.g. Derrick Rose, Russell Westbrook, Deron Williams, Monta Ellis, Gilbert Arenas focus more on scoring as opposed to play making, forgoing assists and ball-movement for higher scoring numbers. Young players who are relatively short (i.e. 6'2" or less) are now developing the scoring aspects of their skill-sets, whereas previously these players would find it difficult to enter the NBA without true point guard skills. These combo point guards can surprise defenses. Instead of passing after bringing up the ball they quickly drive to the basket or step back for an outside shot. There are some disadvantages to this style of play. A point guard is the only position that has the ability to take the ball from one end of the court to the other causing teammates to never touch the ball. This can cause other players to become dis-involved in the offense. Even still, combo guards still require above-average passing skill, but not as much as possessed by "pure" point guards (which is what those in the traditional mold of a point guard are referred to as).

Another important task for a point guard on the defensive end is to be a help defender. Whenever the player that the point guard is tasked with defending is away from the ball, a point guard will usually allow distance to accumulate from his or her assignment in order to help his or her teammates with their assignments. Walt Frazier, Dennis Johnson, Gary Payton, and Magic Johnson are often considered among the greatest defensive point guards in NBA history.[2]