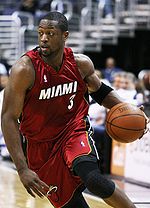 A combo guard is a basketball player who combines the attributes of a shooting guard (2) and point guard (1), but does not necessarily fit the standard description of either position. Such guards are usually within the 6'2" to 6'4" (1.88 to 1.93 m) height range.

Combo guards became prominent in the 1990s, when players such as Allen Iverson were switched between playing point guard and shooting guard depending on offensive and defensive situations. Combo guards use their ball-handling skills to bring the ball up the court and set up teammates, while also being able to create their own shot.

The best combo-guards use their "in-between" height and athleticism to their own advantage: smaller shooting guards will use speed and quickness to run past bigger players, while bigger point guards will shoot over the top of smaller players with their jump shots.

Historically, combo-guards have been viewed as difficult for coaches to fit into an offensive system; however, combo-guards have more recently become an important part of basketball, especially in the NBA. Dwyane Wade, a shooting guard with good ball handling, led the Miami Heat to their first ever NBA Championship, as well as taking home the Finals MVP. In addition, the shift in the sport from a fundamental-driven style of play to one more scoring-orientated means that the inferior passing ability of such guards is not viewed as a serious detriment. This shift is in part explained by hand-checking rules instituted by the NBA in 2007, which makes it a foul for a defender to use his hands to impede an offensive player. This allowed many smaller, weaker combo guards to use their speed to drive around stronger, taller players[1]. In fact, many shorter young players (i.e. 6'2"/1.88 m or less) focus on developing their scoring abilities, whereas previously they would have to be proper point guards with the innate ability to pass to succeed in the professional leagues.

This is in contrast to "true" (or "pure") point guards such as Rajon Rondo, Deron Williams, Steve Nash, Jason Kidd and Chris Paul. These players exhibit a pass-first mentality, value assists and steals over points, and revel in the responsibility of playmaker rather than finisher. They conform to the perception that a point guard's duties are to direct the offense, distribute the ball, create scoring opportunities for others, and attempt the shot only if there are no open team-mates to be found.

Some players, for example Tyreke Evans and Rodney Stuckey, have the requisite size for a shooting guard (around 6'5" or 6'6"), but due their above-average passing and playmaking ability, are used as combo guards.