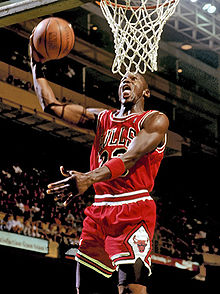 The shooting guard (SG), also known as the two or off guard,[1] is one of five traditional positions on a basketball team. Players of the position are often shorter, leaner, and quicker than forwards. A shooting guard's main objective is to score points for his team.[1] Some teams ask their shooting guards to bring up the ball as well; these players are known colloquially as combo guards. Kobe Bryant, for example, is a shooting guard who is as good a playmaker as he is a scorer; other examples of combo guards are Jamal Crawford of the Atlanta Hawks, Allen Iverson, and Jason Terry. A player who can switch between playing shooting guard and small forward is known as a swingman.

Characteristics and styles of play

The Basketball Handbook by Lee Rose describes a shooting guard as someone whose primary role is to score points. As the name suggests, most shooting guards are good long-range shooters, typically averaging 35–40 percent from three point range (Ray Allen and Reggie Miller are good examples; on the other hand, three-point shooting was regarded as the only flaw in Michael Jordan's game). Many shooting guards are also strong and athletic, and have the ability to get inside the paint and drive to the basket (Michael Jordan being an extraordinary example).

Shooting guards must be able to score in various ways, especially late in a close game when defenses are tighter. They need to have a good free throw percentage too, to be reliable in close games and to discourage opposing players from fouling. Because of the high level of offensive skills shooting guards need, they are often a team's primary scoring option, and sometimes the offense is built around them.

Good shooting guards can usually play point guard to a certain extent. It is usually accepted that point guards should have the ball in their hands at most times, but sometimes the shooting guard has a significant enough influence on the team where he or she handles the ball extremely often, to the point where the point guard may be reduced to a backup ball handler or spot-up shooter.