The City Law School is one of the seven schools of City University in the City of London, and includes the former Inns of Court School of Law.

The School is divided into two sections on two campuses. The academic instruction section is based in the Gloucester Building, next to the university's main campus on Northampton Square. It offers education at all levels of legal qualification, including a three-year undergraduate Bachelor of Laws (LLB) programme, a two-year Graduate Entry LLB degree programme, a one-year Masters of Law (LLM) and the Graduate Diploma in Law course (also known as the Common Professional Examination). This latter programme enjoys a nationwide reputation as one of Britain's elite qualifying diploma courses for non-law graduates.

The professional instruction section, formerly the Inns of Court School of Law, is located at Gray's Inn near Holborn in the Camden district of London. This section administers the Bar Professional Training Course (formerly the Bar Vocational Course) for intending barristers and the Legal Practice Course for intending solicitors as well as several Master of Laws (LLM) masters programmes. The Legal Practice Course is the only one in London to be rated 'Excellent' by the Law Society.

Approximately 550 students are enrolled at the City Law School each year.

The School teaches the Graduate Diploma in Law (GDL) for graduates who wish to qualify as a lawyer without a law degree. The diploma has a strong reputation, and is taught by many of the leading academics in legal education, including John Hopkins and Martin Dixon of the University of Cambridge.

GDL graduates may, through additional study over a second year, apply to receive a LLB degree. The School also offers an undergraduate LLB programme, as well as a two year LLB programme for postgraduates.

The School teaches the Bar Professional Training Course (BPTC) for intending barristers and the Legal Practice Course (LPC) for intending solicitors. In 2007, it received the highest grading from the Law Society of England and Wales. The School also provides a range of Continuing Professional Development (CPD) courses and a Master of Laws (LLM) programme.

Students who successfully complete the BPTC or LPC are awarded a Postgraduate Diploma. The City Law School provides both BPTC and LPC students with the ability to apply for a LLM degree with additional work to be completed over a second year of study.

Academic courses are based in the Gloucester Building, on Whiskin Street in Clerkenwell, part of the Northampton Square campus of City University. Law students are granted their own academic and library facilities.

Professional courses are based in three buildings at the site of the former Inns of Court School of Law, at Gray's Inn: 4, Gray's Inn Place, Atkin Building and Princeton Street.

4 Gray's Inn Place houses the library, school office and the staff offices. Located in Atkin Building is the lecture theatre, (occasionally named Morrison Hall), the Common Room, the Muslim Prayer Room and several small group rooms. The Princeton Street building houses a computer suite and classrooms, and is host to the School's pro bono facilities and the video recording rooms. The building contains a "mini-courtroom" in which BPTC students practice their advocacy skills.

All small group rooms are specifically maintained to accommodate a class of twelve. Each room has a television, video camera and DVD player to allow for filming a student's advocacy performances. 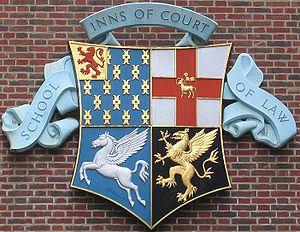 Coat of Arms of the Inns of Court School of Law

Inns of Court School of Law

The Inns of Court School of Law, often abbreviated as ICSL, was a professional legal training institution based for 100 years at Lincoln's Inn and then at Gray's Inn in London. Until 1999, the ICSL had a monopoly on the provision of the Bar Vocational Course (now the Bar Professional Training Course), the obligatory, pre-pupillage training course for intending barristers in England and Wales.

The ICSL was founded by the Council of Legal Education in 1852. Before that time, the Inns of Court were responsible for the education of young barristers. There was a call during the nineteenth century for the education of barristers to be unified and thus the Council of Legal Education was formed and the ICSL was founded. Since 2001, the ICSL has been administered by City University. Although the name "Inns of Court School of Law" is no longer used, the location, facilities and traditions of the original institution remain unchanged.

When the ICSL was first created, each of the four Inns of Court were required to provide two rooms for teaching purposes. Until just after the Second World War, the ICSL was located in Lincoln's Inn. In the 1950s, a purpose-built building was constructed at 4, Gray's Inn Place (within Gray's Inn) and the school relocated there. Shortly after that, Atkin Building in Gray's Inn was secured and then in the 1980s a further building was acquired for the ICSL in Princeton Street, formerly the London studios of Yorkshire Television.

One possible motive for the rebranding of the ICSL appears to be pressure from the Bar Council as a result of complaints raised by other BPTC providers. The concern was that the association to the Inns within the name of the ICSL could result in prejudice against BPTC graduates from non-ICSL institutions.

As might be expected from the institution which had a monopoly on half of the legal training in a large jurisdiction for nearly 150 years, alumni of the ICSL include many judges, Queen's Counsel, and distinguished academics. Others who went on to achieve the highest distinction include four British Prime Ministers - Tony Blair, Margaret Thatcher, Clement Attlee and Herbert Asquith - Mahatma Gandhi, Muhammad Ali Jinnah (first Governor General of Pakistan), Muhammad Iqbal (Allama Iqbal ) and Jawaharlal Nehru (first Prime Minister of India).