Tennis for Two was a game developed in 1958 on an analog computer, which simulates a game of tennis or ping pong on an oscilloscope. Created by American physicist William Higinbotham, it is important in the history of video games as one of the first electronic games to use a graphical display.

Higinbotham created Tennis for Two to cure the boredom of visitors to Brookhaven National Laboratory, where he worked.[2] He learned that one of Brookhaven's computers could calculate ballistic missile trajectories and he used this ability to form the game's foundation.[3] The game uses an oscilloscope as the graphical display to display the path of a simulated ball on a tennis court. The designed circuit displayed the path of the ball and reversed its path when it hit the ground. The circuit also sensed if the ball hit the net and simulated velocity with drag.[4] Users could interact with the ball using an analog aluminum controller[5] to click a button to hit the ball and use a knob to control the angle.[6] Hitting the ball also emitted a sound.[7] The device was designed in about two hours and was assembled within three weeks with the help of Robert V. Dvorak.[8] Excluding the oscilloscope and controller, the game's circuitry approximately took up the space of a microwave oven.[5]

Though there was no direct kinship between the two games, Tennis for Two was a predecessor of Pong—one of the most widely recognized video games as well as one of the first. Tennis for Two was brought out only twice, on "Visitor's Day" at the Laboratory. It remained virtually unheard of until the late 1970s and early 1980s when Higinbotham was called on to testify in court cases for defendants against Magnavox and Ralph Baer.[4] Unlike Pong and similar early games, Tennis for Two shows a simplified tennis court from the side instead of a top-down perspective, with no representation of the player on the screen. The perspective shows more of the ball's trajectory than Pong's view.[9] The ball is affected by gravity and must be played over the net. The game was controlled by an analog computer and "consisted mostly of resistors, capacitors and relays, but where fast switching was needed—when the ball was in play—transistor switches were used."[10][11] 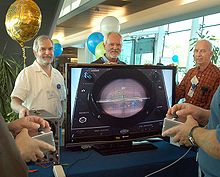 Visitors at the Brookhaven National Laboratory play Tennis for Two projected on a large screen during the 50th Anniversary celebration.

The game is regarded as a hit during its initial showing on October 18, 1958. Hundreds of visitors lined up to play the new game during its initial debut.[5] Due to the game's popularity, an upgraded version was shown the following year, with enhancements including a larger screen and different levels of simulated gravity.[7] In 2008, a team at Brookhaven recreated the game for the 50th Anniversary. The feat took about 3 months partially because the parts were not readily available.[5][12]

Depending on interpretation of the term "video game", Tennis for Two has been called the first video game.[11] Other early electronics games with visual displays also considered are OXO and an unnamed missile-like game patented in 1948 that used overlaid pictures to represent targets to be hit by a controlled beam of light.[4][13][14] Unlike the latter two, Tennis for Two displayed motion and had the graphics contained within the system.[7] Higinbotham never patented the design, partly because the design patent would have been given to the federal government, which financed Brookhaven. Additionally, Higinbotham did not see the game as a big difference from the computer's existing capability.[7][12]

Controversy exists, however, because Tennis for Two uses an oscilloscope rather than a conventional CRT monitor or television set as its video display. This was largely in part because Higinbotham was simply putting together a makeshift technology demonstration to entertain visitors rather than to produce a marketable commercial product. Because Tennis for Two outputs to a vector oscilloscope, thus having no raster video signal as used by standard TV and computer displays (however, the game does produce a vector video signal as used by some later video games, such as Asteroids, and in fighter aircraft HUDs), and contains no directly player-controlled objects—players did, however, control invisible "racquets" that would alter the trajectory of the "ball"—it was summarily thrown out during several court cases where it was brought forth as a previous example of video game technology.[15]