Vallenato, along with cumbia, is currently a popular folk music of Colombia. It primarily comes from the Colombia's Caribbean region. Vallenato literally means "born in the valley". The valley influencing this name is located between the Sierra Nevada de Santa Marta and the Serranía de Perijá in northeast Colombia. The name also applies to the people from the city where this genre originated: Valledupar (from the place named Valle de Upar - "Valley of Upar"). In 2006 Vallenato and cumbia were added as a category in the Latin Grammy Awards.

This form of music originated from farmers who, keeping a tradition of Spanish minstrels (Juglares in Spanish), mixed also with the West African-inherited tradition of griots (African version of juglar), who used to travel through the region with their cattle in search of pastures or to sell them in cattle fairs. Because they traveled from town to town and the region lacked rapid communications, these farmers served as bearers of news for families living in other towns or villages. Their only form of entertainment during these trips was singing and playing guitars or indigenous gaita flutes, known as kuisis in the Kogi language, and their form of transmitting their news was by singing their messages.

The first form of Vallenato was played with gaita flutes, guacharaca, and caja, and later adopted other instruments like guitars. These troubadors were later influenced by Europe's instruments: piano and accordion. Shocked with the sound from the accordion, troubadors probably obtained later on accordions from Aruba and Curaçao. Vallenato was considered music of the lower class and farmers, but gradually started penetrating through every social group during the mid-20th century.

Don Clemente Quintero—a prominent member from the region's elite—was a lover of this music, usually accompanied by liquor, was a form of entertainment for this almost isolated region. He then decided to start a parranda (party) inside the very strict Valledupar Social Club with friends. This triggered an acceptance for the music and it became a regular feature at parties, carnivals and reunions, not for dancing, but for listening to these juglares stories[citation needed].

Alfonso López Michelsen, a prominent Colombian politician, showed interest in the region as his ancestors and wife were born there. While a Senator, he pushed for the creation of the Department of Cesar and became, in 1966, its first governor. Once in office and together with writer and reporter Consuelo Araújo Noguera and vallenato composer Rafael Escalona, they created the Vallenato Legend Festival.

Its three traditional instruments are:

Vallenato consists of four beats or "airs" that are differentiated through their rhythmic structure and the melody chord structure the accordionist gives it. These are son, paseo, merengue, and puya. The son and the paseo have a 2/4 time and the merengue and the puya a 6/8 time.

Piqueria is a battle among singers, usually accompanied by the rhythm of instruments.

The Vallenato Legend Festival: Every year by the end of April, in the city of Valledupar, the Festival de la Leyenda Vallenata (Vallenato Legend Festival) is celebrated. During the festival a contest takes place in which the best vallenato interpreters fight for the title of Rey Vallenato (Vallenato accordion King), "verseadores", new song composers, "guacharaqueros" and "cajeros" are also awarded within three categories; professional, aficionado and infant. The festival also includes record industry's orchestras shows.

Accordions' Cradle Festival: (Festival cuna de acordeones) This festival is celebrated every year since 1979, in Valledupar's neighboring town of Villanueva, in La Guajira. The Festival is similar to the Vallenato Legend Festival format, but also includes a category for the elderly accordion players over sixty years old.

The current ambassador of the genre is multiple-time Grammy Award-winner Carlos Vives, who has progressively helped vallenato gain popularity worldwide by combining traditional vallenato music with pop/rock music, subgenre that has come to be known as "vallenato-pop".

The traditional vallenato developed into a more orchestra type of musical group. Throughout the years, some groups started adding instruments and a group chorus to support the main singer, popularly and sarcasticly known as "ay omberos". With these changes. Some of the instruments added or used by some orchestras were: the bass guitar, the congas drums, a Timbal set, drum kit, maracas, guache, electric piano, spanish guitars, tambourine, cowbell, electric guitar, Saxophone, piano accordion, violins, among others. These groups also started fusioning local genres to the vallenato, usually with cumbia, porro sabanero, gaitas (group of gaita flute interpreters), merecumbe and joropo. Some groups seeking a wider audience started mixing vallenato with other international genres, like salsa, merengue, rock, classical music, reggae, reggaeton, ranchera, techno music, house music. Some of these mixes didn't become very popular because of its awkward sound.

La Nueva Ola refers to the new generation of Vallenato groups and orchestras that have created a distinctive sound for themselves while keeping some of the essence of their predecessors. Kaleth Morales is considered leading artist of this young wave of vallenato musical groups, even after his sudden death in a car accident on August 24, 2005. The leader is now Silvestre Dangond, who won five awards in Premios Nuestra Tierra in 2009. 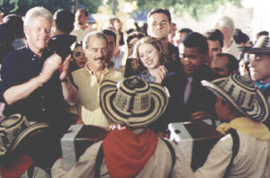 US President Bill Clinton and daughter Chelsea during a visit to Cartagena, Colombia, where they were greeted by a Vallenato children group.