Disorder in the Court

Disorder in the Court is the 15th short subject starring American slapstick comedy team the Three Stooges. The trio made a total of 190 shorts for Columbia Pictures between 1934 and 1959.

The Stooges are key witnesses at a murder trial. Their friend and colleague, Gail Tempest (Suzanne Kaaren), is a dancer at the Black Bottom cafe where the Stooges are musicians. She is accused of killing Kirk Robin (a play on "Who Killed Cock Robin?").

When Curly (Curly Howard) is called to the witness stand, he is nowhere to be found. The defense attorney (Bud Jamison) goes out into the hall and finds the Stooges playing jacks AND tic-tac-toe on the floor. After considerable mutual frustration, the court finally swears in Curly, who begins to describe the events that took place on the night of the murder. He offers to show the court exactly what happened, and the Stooges break into their musical routine, with Larry (Larry Fine) playing the violin, Moe (Moe Howard) playing the harmonica, and Curly playing the spoons. Gail Tempest shrugs off her coat and reveals her dancer costume, to the great surprise of the jury.

The act ends when Larry mistakes a toupée for a tarantula; Moe subsequently takes the guard's gun and starts shooting the toupée, causing pandemonium in the court. After everything is brought under control, Moe and Curly re-enact the actual murder (with Curly on the receiving end). Moe then looks at the parrot, who was at the murder scene, and sees a note tied to the parrot's foot. He opens the parrot cage, and the parrot flies out. The Stooges eventually capture the bird by shooting water at it through a fire hose. Moe then reads the letter out loud and reveals that it is a confession from the real murderer, Buck Wing, which proves Gail's innocence.

From left to right: Larry, Moe, Curly, Gail, and the defense attorney. 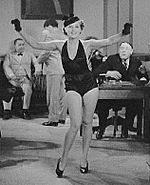 Gail Tempest dancing in the court.