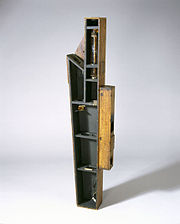 The Dobson spectrophotometer, also known as Dobsonmeter or Dobson spectrometer, is the earliest instrument used to measure atmospheric ozone. It was invented in 1926 by Gordon Dobson.[1] A history of the development of the instrument is here[2]

Dobson spectrophotometers can be used to measure both total column ozone and profiles of ozone in the atmosphere. Ozone is tri-atomic oxygen, O3; ozone molecules absorb harmful UV light in the atmosphere before it reaches the surface of the earth. No UVC radiation penetrates to the ground as it is absorbed in the ozone-oxygen cycle. However some longer-wave and less harmful UVB and most of the UVA is not absorbed as ozone is less opaque to these frequencies, so they penetrate to the ground level of Earth in higher quantities. The sources of light used may vary. Beside the direct sun light, the light from the clear sky, moon or stars may be used.

A discussion of the instrument can be found here: ftp://ftp.cmdl.noaa.gov/dobson/Papers/dobson%20ozone%20spectrophotometer%20overview2.ppsx A copy of the instrument handbook is available from the WMO: http://www.wmo.int/pages/prog/arep/gaw/documents/GAW183-Dobson-WEB.pdf

The ratio is determined by turning the R-dial, which can be rotated a full 300°, on the instrument. The spectrometer compares two different wavelength intensities, UVB (305 nm) and UVA (325 nm),[3] in order to calculate the amount of ozone. When turned, the R-dial filters and blocks out the light of the UVC wavelength until the intensity of the two wavelengths of light are equal. The ratio of the two wavelengths at incidence can be deduced once the filtered intensities are the same. The results are measured in Dobson Units, equal to 10 µm thickness of ozone compressed to Standard conditions for temperature and pressure (STP) in the column. If all of the ozone in the atmospheric column one was measuring were compressed to STP, the thickness of the compressed atmosphere in mm would equal an answer in Dobson Units divided by 100.

The vertical distribution of ozone is derived using the Umkehr method. This method relies on the intensities of reflected, rather than direct, UV light. Ozone distribution is derived from the change in the ratio of two UV frequencies with time as the sun sets. An Umkehr measurement takes about three hours, and provides data up to an altitude of 48 km, with the most accurate information for altitudes above 30 km.

The Dobson method has its drawbacks. It is strongly affected by aerosols and pollutants in the atmosphere, because they also absorb some of the light at the same wavelength. Measurements are made over a small area. Today this method is often used to calibrate data obtained by other methods, including satellites.

Some modernized versions of Dobson spectrophotometer exist and continue to provide data The Environment Canada (Alan Brewer) developed the Brewer Spectrophotometer still produced by Kipp & Zonen. About 120 Dobsonmeters have been made, mostly by R&J Beck of London, of which about 50 remain in use today. The most famous ones are probably Nos. 31 and 51 with which Joe Farman of the British Antarctic Survey discovered the Ozone Hole in 1984.

The oldest instrument still in use is No.8 located at the roof of the Norwegian Polar Institute at Ny Ålesund, Svalbard. This instrument has the last reported data for 1997

The instrument D003, operated in Kunming, China reported data to August 2009. The history of the stations and instruments can be found at the World Ozone and UV Data Centre