Clock Cleaners is a 1937 American animated short film produced by Walt Disney Productions and released by RKO Radio Pictures. The cartoon follows Mickey Mouse, Donald Duck, and Goofy working as janitors in a tall clock tower. The film was directed by Ben Sharpsteen and features original music by Paul Smith and Oliver Wallace. The voice cast includes Walt Disney as Mickey, Clarence Nash as Donald, and Pinto Colvig as Goofy.[1][2][3]

Clock Cleaners is one of Disney's most critically acclaimed short films. In 1994, 1000 members of the animation field voted Clock Cleaners as the 27th greatest cartoon of all time.[4]

Mickey, Donald, and Goofy are assigned to clean a tall clock tower. Mickey is outside cleaning the face with a mop by riding on the second hand. Goofy is inside the building cleaning gear teeth with a large toothbrush. Donald (singing "Hickory Dickory Dock") starts to mop the mainspring, ignoring several warning signs. He gets the mop caught and springs it loose.

Meanwhile Mickey, now cleaning inside the clock, comes across a sleeping stork which he tries unsuccessfully to remove. Mickey is left hanging on a rope outside the tower.

Back inside, Donald is getting the mainspring back into place with a mallet, but he struggles to get the very last piece in place. Donald gets furious at the spring and asks "What's the big idea?" The spring seems to respond with an echo of Donald's question. Donald gets into an argument with the spring, but it knocks him off. Donald get's his head stuck in a gear on the balance wheel shaft. When he finally is free from it, the oscillation makes his body continue to move.

Now outside, Goofy (singing "Asleep in the Deep") is cleaning the outside bell. While he is cleaning the interior of the bell, it becomes 4:00 pm, causing two mechanical statues to come from inside the tower and ring the bell four times. The first figure, resembling Father Time, startles Goofy, but when he looks out he sees no one and continues cleaning. The second figure, representing Lady Liberty, rings the bell from the other side. After the third ring, Goofy is determined to be ready for the next time. He is ready to attack, but when he sees Lady Liberty, he chivalrously apologizes. But Goofy is standing between her torch and the bell, and gets a big knock to the head.

This puts Goofy in a dizzy lovestruck stupor for the rest of the film. ("Spring Song") He becomes tipsy and almost falls off the tower. Mickey is alarmed when he sees Goofy almost fall and tries to save him. At each turn Mickey is just barely able to save Goofy. At last the two of them fly through a window, land on the mainspring which Donald has finally managed to put back together, then all three land in the same gear in which Donald was stuck earlier. 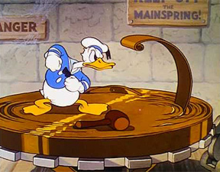 During the 1990s, Donald Wildmon and the American Family Association persuaded Wal-Mart to discontinue the sale of the VHS tape "Cartoon Classics: Fun on the Job!" which contained the film. The reason for this was that during his argument with the main spring in the image to the left, Donald Duck allegedly shouts "Fuck you!" yet in Clarence Nash's semi intelligible voice, he actually says "Says you!", which is made clear by the spring's reply, "Says I!" Additionally the Motion Picture Production Code, popularly known as the "Hays Code," adopted in 1930, would never have allowed the language in the first place.

Due to this controversy, when the cartoon was included on the Walt Disney Treasures DVD set Mickey Mouse in Living Color, Donald's line was redubbed with the line, "Awww, nuts!", originally said in On Ice. The edit is made obvious by the fact that the viewer can hear Pluto barking when Donald says this. The same edit also occurs on the DVD release of The Great Mouse Detective (which includes the cartoon as a bonus feature, in reference to the film's final battle in Big Ben) and the later DVD Funny Factory with Goofy, as well as the bonus Epic Mickey DVD; however, the scene is shown with its original dialogue in the TV special One Hour in Wonderland, which is included as a bonus feature on the Alice in Wonderland: Masterpiece Edition DVD. Additionally, recent broadcasts of the cartoon on the Disney Channel have reinstated the original line. In addition, the DVD release of Have a Laugh!, Volume 2 contains the cartoon with the original line reinstated, as well as its original RKO titles and illustrated title card.