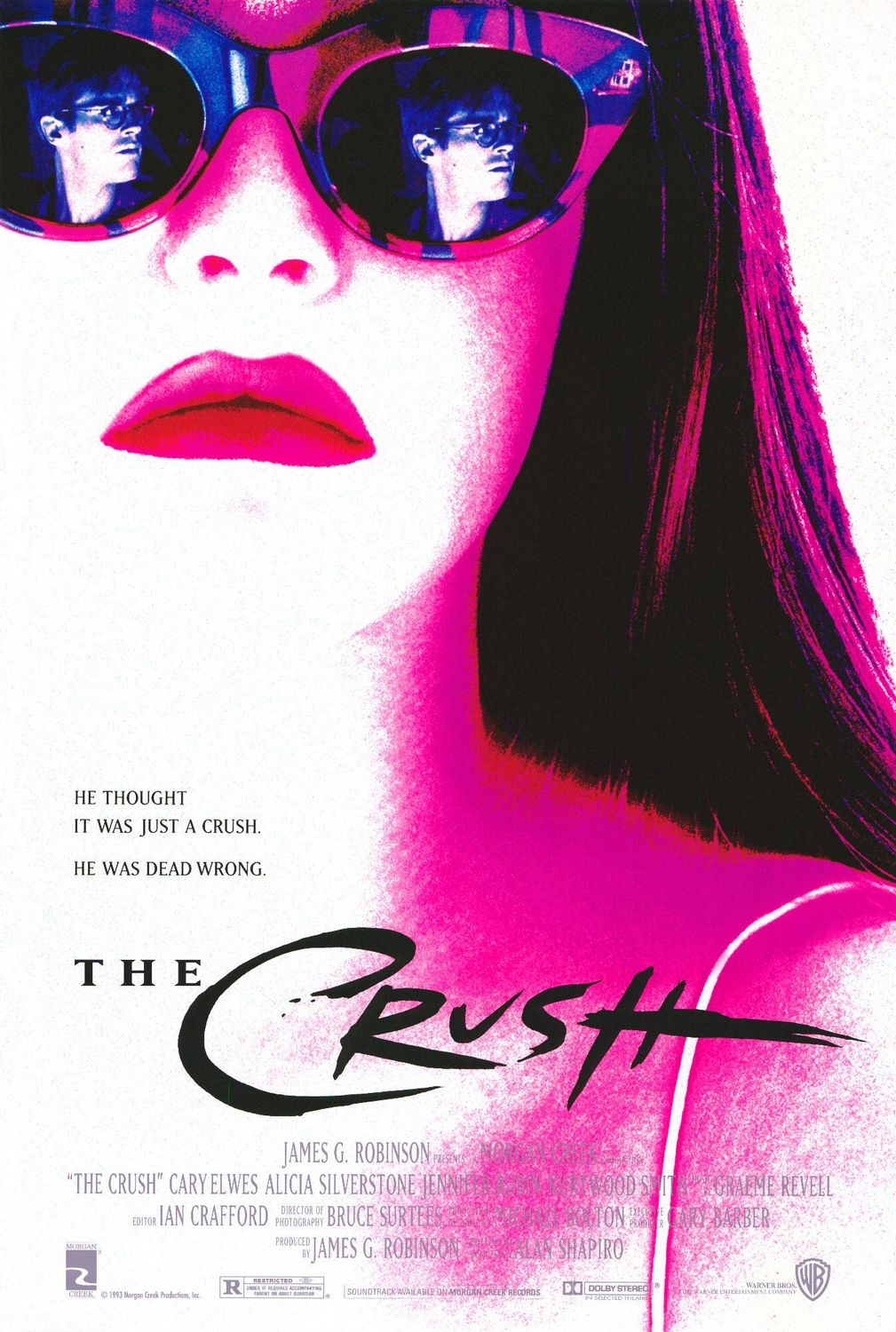 "The Crush" is a 1993 American thriller film written and directed by . It stars and in her feature film debut. It was filmed on location in , , .

Nick Eliot (Elwes), a , moves into a new neighborhood where the young Adrian Forrester (Silverstone) lives. She is fourteen years old, half his age. She becomes very interested in him, but he rejects her advances, especially since she is so young. Her parents don't realize she is an emotionally unstable , even after she sets out to destroy his life — and eventually him.

Tagline: "He thought it was just a crush. He was dead wrong."

Arriving in a new city, writer Nick Eliot () secures a job at Pique magazine and lodgings in a guest house belonging to Cliff and Liv Forrester ( and ). The handsome Nick soon makes the acquaintance of the Forrester's 14-year-old daughter Adrian (), a precocious girl who develops an intense attraction to him. She secretly helps Nick by sneaking into his room and rewriting one of his Pique stories, which subsequently wins a rave from his editor/boss Michael (Matthew Walker). At a party thrown by the Forresters, Nick agrees to accompany the lonely girl on a nightly drive to a romantic spot, where she kisses him.

This intensifies Adrian's crush on Nick, but he quickly wises up and attempts to put her off, having begun a budding romance with co-worker Amy (). Adrian continues to boldly pursue him, even going so far as to undress in his view. Nick, however, continues to rebuff her advances, and Adrian's actions become destructive--she defaces a car he's restored and erases his computer discs--yet he's unable to convince Cliff and Liv of what's going on. Cheyenne (), a friend of Adrian who has warned Nick about her, meets with an "accident" at the riding school they attend together. Then, after Adrian spies on Amy in bed with Nick, the girl locks Amy in her darkroom and empties a ' nest into the vents.

Amy survives, and Nick, now convinced that Adrian is big trouble, attempts to find new lodgings. However, Adrian manages to sabotage his efforts. She then accuses him of assaulting her with "evidence" obtained from a used condom from Nick's trash, leading to his arrest. After Michael bails him out (and fires him), Nick is met once again by Cheyenne, who informs him of a diary Adrian kept that can acquit him. When he goes looking for it, he discovers Cheyenne tied up in the attic and is confronted by Adrian and then Cliff, who attacks him. Adrian, still infatuated, attacks her father, leaving Nick free to subdue her with one punch. Acquitted, Nick goes to live with Amy while Adrian, confined to a , continues to write him letters, even as she's developing a crush on her doctor.

Though the film was allegedly loosely based on writer-director 's experience involving a girl named Darian, the film's end credits deny any relative basis on actual people or events, stating that the "Story, events, and characters depicted are fictitious, no identification with or similarity to actual persons or to actual events is intended or should be inferred". Alicia Silverstone's character was originally named Darian. As a result of a lawsuit brought by the real Darian's family, the character was renamed to Adrian and the movie dubbed to reflect the change. Shapiro hated the change and had no say in it nor had any input into its implementation.

The original actors did not dub their own voices for the Adrian name change. The cast admitted that the dubbing was done by unknown actors, hence the slight difference with the voices. At times, some dialogue phrases preceding the name Adrian were also dubbed for a more unnoticeable voice transition. When the film was released in theaters in 1993, audiences got to hear the name Darian. The name Darian also remained on VHS and laserdisc editions. The DVD release contains the dub.

was searching for an actress to star in his upcoming music video when a friend suggested that he watch "The Crush", which was currently playing in theaters at the time. He did, and he cast in not one but three of the highly popular videos of the early 1990s known as the "Cryamazy trilogy", entitled "," "Crazy," and "Amazing".

*The final confrontation on an amusement park carousel was inspired by the Hitchcock film "".