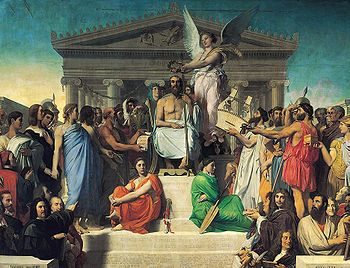 A mythographer, or a mythologist is a compiler of myths. The word derives from the Greek "μυθογραφία" (mythografia), "writing of fables",[1] from "μῦθος" (mythos), "speech, word, fact, story, narrative"[2] + "γράφω" (graphο), "to write, to inscribe".[3] Mythography is then the rendering of myths in the arts. In the 20th century, the mythographer might also be a scholarly interpreter, sometimes drawing on field work, often with the aim of contributing to the fields of cultural anthropology, religious studies, or a myth theory.

One of the first Western attempts at rationalization of mythology, and more generally of religious beliefs, can be traced to Euhemerus. This Greek mythographer at the court of Macedon in the late 4th century BC held that myths were actually true stories of historical persons, twisted and amplified. This doctrine is called Euhemerism. Even today, the Ancient astronaut theories has been described as "neo-Euhemerism" by French sociologist Jean-Bruno Renard.

The philosophes, such as Voltaire, were interested in dispelling myths, not explaining their existence. While the basic understandings of the Western world were informed by Christianity in all areas of study, the term mythographer referred to someone who attempted to explain pagan myths in terms of misremembering the events of the Old Testament or wilfully altering them. Some of the theories of explanation from classical times were also used, such as the apotheosis of a local hero. This was before the Enlightenment, or, speaking more precisely, before the arrival of historicism.

It has been a consistent strand of Romanticism, to insist on a level of validity of myth, and these arguments have often connected myth with the creative imagination. These notions come together in the concept of mythopoeic imagination, which has been articulated in the anthropological work of Jadran Mimica,[4] among others. Theories with an academic basis which support this thinking have been popular, in the sense of receiving much attention; without ever being able to support claims of reliability acceptable to more rationalistic perspectives.

Already in the 19th century there was a tendency to produce large-scale myth theories, such as those of Max Müller with emphasis on solar myths (shared with Adalbert Kuhn the philologist), Andrew Lang, Wilhelm Mannhardt, and James Frazer. The work of Müller and Frazer, in particular, was seen by others as a contribution to comparative religion, and a myth theory was an implicit commentary on Christianity. This aspect of mythography was certainly controversial, and those who worked in the area tended to make the inclusion of Christian sacred narratives within the theory only tacitly. The scope of theories also expanded to cover myth from all parts of the world, where the initial field was mainly classical mythology and myths from areas adjacent to the Roman Empire. Mythography reached both into the past, for example with the background of all Indo-European languages, and wherever in the contemporary world anthropologists were working. Cyril Charles Martin, writing in the Catholic Encyclopedia of 1913 on paganism, summed up theories as follows:

Scholars such as Carl Jung, Georges Dumezil, James Hillman and Claude Lévi-Strauss continued this tradition in the 20th century. The direction of comparative religion is represented by Mircea Eliade, and also to some extent by the literary critic René Girard. The French sociological school has argued in terms of myths having social function.

There were numerous other mythographic 'schools' in the first half of the 20th century. Ernst Cassirer's approach was through philosophy, specifically the so-called Marburg School of Kantian thought; it had a direct influence on Susanne Langer, and has been traced as an influence on Mikhail Bakhtin.

Besides the anthropologist's reason — better understanding of a particular culture in its own terms, that is, for the purposes of cultural anthropology — there are very varied reasons behind the interest of the mythographer. The origins of Greek drama were the immediate cause of the rise of the myth-ritual school, of Jane Harrison, Gilbert Murray and others. Karl Kerenyi, also involved in Greek mythology, was an associate of Carl Jung, who adopted mythological material in his psychological theories.

In general literary criticism, myth criticism was put forward by Maud Bodkin, Philip Wheelwright, and others such as Francis Fergusson, Leslie Fiedler, and G. Wilson Knight. The critic Northrop Frye, working from Blake and the Bible as fundamental, always wished to distinguish himself from the myth-ritual school, but is often seen as in some sense having summed up the whole tendency. Robert Graves was interested in poetic theory, and supported his celebrated White Goddess with analysis harking back to Müller and Frazer, as well as the myth-ritual tendency.

The old idea of a universal myth theory, derided by Voltaire, is in modern times most famously represented by Joseph Campbell. There were many books written in the 17th century purporting to explain all myths. But Voltaire was deriding a Christian myth theory, while Campbell proposes a psychological one.

Perhaps the last work which employed this earlier use of the term mythography was George Eliot's novel Middlemarch. Its character Casaubon was involved in such a project in the mid-19th century. The story tells of a woman who proved unable to finish the project after his death and abandoned it. Casaubon's character is a satire on academic pedantry and hubris.