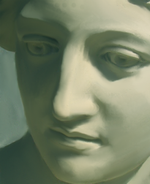 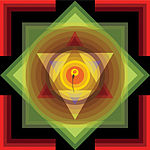 R. Gopakumar: Cognition-Libido (Digital Print on Canvas, Limited Edition, 1/7) In the permanent collection of the Kinsey Institute for Research in Sex, Gender, and Reproduction

Digital painting is an emerging art form in which traditional painting techniques such as watercolor, oils, impasto, etc. are applied using digital tools by means of a computer, a digitizing tablet and stylus, and software. Traditional painting is painting with a physical medium as opposed to a more modern style like digital. Digital painting differs from other forms of digital art, particularly computer-generated art, in that it does not involve the computer rendering from a model. The artist uses painting techniques to create the digital painting directly on the computer. All digital painting programs try to mimic the use of physical media through various brushes and paint effects. Included in many programs are brushes that are digitally styled to represent the traditional style like oils, acrylics, pastels, charcoal, pen and even media such as airbrushing. There are also certain effects unique to each type of digital paint which portraying the realistic effects of say watercolor on a digital 'watercolor' painting.[1] In most digital painting programs, the user can create their own brush style using a combination of texture and shape. This ability is very important in bridging the gap between traditional and digital painting.

Digital painting thrives mostly in production art. It is most widely used in conceptual design for film, television and video games. Digital painting software such as Corel Painter, Adobe Photoshop, ArtRage, GIMP, and openCanvas give artists a similar environment to a physical painter: a canvas, painting tools, mixing palettes, and a multitude of color options. There are various types of digital painting, including impressionism, realism, and watercolor. There are both benefits and drawbacks of digital painting. While digital painting allows the artist the ease of working in an organized, mess-free environment, some argue there will always be more control for an artist holding a physical brush in their hand. Some artists believe there is something missing from digital painting, such as the character that is unique to every physically made object. Many artist post blogs and comment on the various differences between digitally created work and traditionally created artwork.[2][3]

The main difference between digital and traditional painting is the non-linear process. That is, an artist can often arrange their painting in layers that can be edited independently. Also, the ability to undo and redo strokes frees the artist from a linear process. But digital painting is limited in how it employs the techniques and study of a traditional painter because of the surface differences and lack of physicality. The digital artist has at their disposal several tools not available to the traditional painter. Some of these include: a virtual palette consisting of millions of colors, almost any size canvas or media, and the ability to take back mistakes, as well as erasers, pencils, spray cans, brushes, combs, and a variety of 2D and 3D effect tools. A graphics tablet allows the artist to work with precise hand movements simulating a real pen and drawing surface. Even the traditional surface has changed for digital painting. Instead of a canvas or sketchbook, artists would use a mouse or tablet to display strokes that would appear with the touch of a pen to the tablet’s surface, or a click of pen. Tablets can be pressure sensitive, allowing the artist to vary the intensity of the chosen media on the screen. There are tablets with over two thousand different levels of pressure sensitivity.[4]

The earliest graphical manipulation program was called Sketchpad. Created in 1963 by Ivan Sutherland, a grad student at MIT, Sketchpad allowed the user to manipulate objects on a CRT (cathode ray tube).[5] Sketchpad eventually led to the creation of the Rand Tablet for work on the GRAIL project in 1968, and the very first tablet was created. Other early tablets, or digitizers, like the ID (intelligent digitizer) and the BitPad were commercially successful and used in CAD (Computer Aided Design) programs. Modern day tablets are the tools of choice by digital painters. WACOM is the industry leader in tablets which can range in size from 4” x 6” all the way to 12” x 19” and are less than an inch thick. 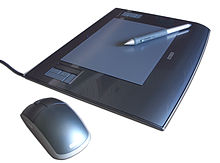 Many artists prefer using graphics tablets to create digital paintings instead of using a mouse.

The idea of using a tablet to communicate directions to a computer has been an idea since 1968 when the RAND (Research and Development) company out of Santa Monica, developed a tablet that was used to program.[6] Digitizers were popularized in the mid 1970s and early 1980s by the commercial success of the ID (Intelligent Digitizer) and BitPad manufactured by the Summagraphics Corp. These digitizers were used as the input device for many high-end CAD (Computer Aided Design) systems as well as bundled with PC's and PC based CAD software like AutoCAD.

The first commercial program that allowed users to design, draw, and manipulate object was the program MacPaint. This program’s first version was introduced on January 22, 1984 on the Apple Lisa. The ability to freehand draw and create graphics with this program made it the top program of its kind during 1984.[7] The earlier versions of the program were called MacSketch and LisaSketch, and the last version of MacPaint was MacPaint 2.0 released in 1998.[8] Much of MacPaint's universal success was attributed to the release of the first Macintosh computer which was equipped with one other program called MacWrite. It was the first personal computer with a graphical user interface and lost much of the bulky size of its predecessor, the Lisa. The Macintosh was available at about $2500 and the combination of a smaller design made the computer a hit, exposing the average computer user to the graphical possibilities of the included MacPaint.[9]

Another early image manipulation program was Adobe Photoshop. It was first called Display and was created in 1987 by Thomas Knoll at the University of Michigan as monochrome picture display program. With help from his brother John, the program was turned into an image editing program called Imagepro, but later changed to Photoshop. The Knolls agreed on a deal with Adobe systems and Apple, and Photoshop 1.0 was released in 1991 for Macintosh. Adobe systems had previously release Adobe Illustrator 1.0 in 1986 on the Apple Macintosh. These two programs, Adobe Photoshop and Adobe Illustrator are currently two of the top programs used in the productions of digital paintings. Illustrator introduced the uses of Bezier curves which allowed the user to be incredibly detailed in their vector drawings.

In 1988, Craig Hickman created a paint program called Kid Pix, which made it easier for children to use MacPaint. The program was originally created in black in white, and after several revisions was released in color in 1991. Kid Pix was one of the first commercial programs to integrate color and sound in a creative format. While the Kid Pix was intentionally created for children, it became a useful tool for introducing adults to the computer as well.[10]

In recent years there has been a growth in the websites which support painting digitally online. Internet resources for this include Sumo Paint and Queeky. The user is still drawing digitally with the use of software, but many times the software is on the server of the website which is being used, but with the emergence of html5 some now partly use the client's web browser to handle of of the processing. The range of tools and brushes is usually more limited than free standing software. However speed of response, quality of colour and the ability to save to a file or print are similar in either media.

Digitally painted images have the flexibility of being either uploaded onto a computer for viewing or simply printed directly onto paper for display. Digital painting has had a large impact on speed painting.The ability to capture every stroke of the painting process in this digital format is a unique advantage of digital painting. The nature of digital painting has facilitated the ability to learn how to digitally paint. Tutorials are easy to document, create and share on the internet, so with the given tools and resources anyone can learn.