The Fulvous Whistling Duck, Dendrocygna bicolor, is a whistling duck which breeds across the world's tropical regions in much of Central and South America, Sub-Saharan Africa, the Indian subcontinent, and the Gulf Coast of the United States.

The Fulvous Whistling Duck is a common but wary species. It is largely resident, apart from local movements, but vagrancy has occurred to southern Europe. It nests on a stick platform in reeds, laying 8–12 eggs, but hollow trees or old bird nests are occasionally used for nesting. 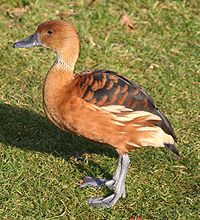 Its habitat is freshwater lakes, paddy fields or reservoirs with plentiful vegetation, where this duck feeds mainly at night on seeds and other parts of plants..

The Fulvous Whistling Duck is 48–53 cm (19–21 in) long. It has a long grey bill, long head and longish legs, buff head and underparts, the latter reddish-tinged on the flanks, a dark crown, and dark grey back and wings. The tail and wing patches are chestnut, and there is a white crescent on the upper tail which is visible in flight.

All plumages are similar, except that juveniles have less contrasted flank and tail colouration.

This species is gregarious, and at favoured sites substantial flocks can form. As the name implies, these are noisy birds with a clear whistling kee-wee-ooo call.

The Fulvous Whistling Duck is one of the species to which the Agreement on the Conservation of African-Eurasian Migratory Waterbirds (AEWA) applies.