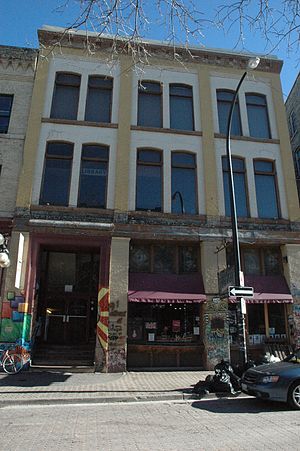 The Old Market Autonomous Zone, or A-Zone, was founded in 1995, in Winnipeg, Canada by local activists Paul Burrows and Sandra Drosdowech, who also co-founded Winnipeg's Mondragon Bookstore.[1] Its name is derived from "Old Market Square," the historic Exchange District in Winnipeg's downtown core area,[2] combined with Hakim Bey's notion of a "Temporary Autonomous Zone" (or TAZ). The Winnipeg A-Zone occupies a three-story building, originally built in 1899 and known as the "Imperial Dry Goods Building." Like many buildings in the area, it is classified as a heritage building by the City of Winnipeg. Since 1995, the building has been known locally as both the A-Zone, and sometimes the Emma Goldman Building.[3] Along with Mondragon, the A-Zone has become a focal point of activism and organizing in Winnipeg since 1995. Both the overall space at 91 Albert Street, as well as member groups such as Mondragon Bookstore & Coffee House have become a source of inspiration, as well as a travel destination, for activists, anarchists, anarcho-punks, vegans, and proponents of parecon and worker cooperatives across North America, and beyond.[citation needed]

The original aims of the A-Zone were to:

The A-Zone supports worker-owned businesses, whether worker co-ops or sole proprietorships, as well as grassroots activist groups and collectives, and in turn been supported by them, since starting in 1995. Current member organizations include:

In 2007, the Rudolf Rocker Cultural Centre (r2c2) was founded on the third floor of the building, and according to the r2c2 website, functions as a "gallery and multi-purpose venue for social, political, and cultural events of interest to the anarchist, activist, and wider Winnipeg community."[4]

The A-Zone's core principles include a commitment to Participatory Economics (or Parecon), autonomy and solidarity, anti-colonialism "at home" and abroad, fair and equitable work, non-hierarchical decision-making, community economic development, and revolution [2].